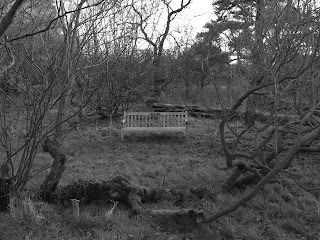 It is clear, in this country at least, that even when the churches try to pull together positively - as during the week of prayer for Christian unity - they have not been able to counter the serious decline in traditional institutional forms of the Christian faith.

And, although our own radical and liberal church tradition is critical of certain aspects of mainstream Christianity, always we hope creatively and lovingly, we are also having to face up to this reality ourselves as we try to reshape ourselves so as to remain relevant to the age.

But, in the meantime - i.e. today - there is no point denying the fact of decline and we would do well to heed the advice of John Henry Newman who wisely said: "Let us take things as we find them: let us not attempt to distort them into what they are not. We cannot make facts. All our wishing cannot change them. We must use them."

We'll start with one of the classic acknowledgments of this decline, namely Matthew Arnold’s beautiful and famous poem, "Dover Beach", in which he memorably spoke of the Sea of Faith’s "melancholy, long, withdrawing roar."

The sea is calm to-night.
The tide is full, the moon lies fair
Upon the straits; on the French coast the light
Gleams and is gone; the cliffs of England stand;
Glimmering and vast, out in the tranquil bay.
Come to the window, sweet is the night-air!
Only, from the long line of spray
Where the sea meets the moon-blanched land,
Listen! you hear the grating roar
Of pebbles which the waves draw back, and fling,
At their return, up the high strand,
Begin, and cease, and then again begin,
With tremulous cadence slow, and bring
The eternal note of sadness in.

Sophocles long ago
Heard it on the Agaean, and it brought
Into his mind the turbid ebb and flow
Of human misery; we
Find also in the sound a thought,
Hearing it by this distant northern sea.

The Sea of Faith
Was once, too, at the full, and round earth's shore
Lay like the folds of a bright girdle furled.
But now I only hear
Its melancholy, long, withdrawing roar,
Retreating, to the breath
Of the night-wind, down the vast edges drear
And naked shingles of the world.

Ah, love, let us be true
To one another! for the world, which seems
To lie before us like a land of dreams,
So various, so beautiful, so new,
Hath really neither joy, nor love, nor light,
Nor certitude, nor peace, nor help for pain;
And we are here as on a darkling plain
Swept with confused alarms of struggle and flight,
Where ignorant armies clash by night.

As Arnold stood on the shore of Dover Beach watching the tide recede it felt to him that so too was the faith of his forebears. In 1875 in his preface to "God and the Bible" he expressed his view clearly saying:

At the present moment two things about the Christian religion must surely be clear to anybody with eyes in his head. One is, that men cannot do without it; the other, that they cannot do with it as it is.

He became convinced that popular religion was "touched with the finger of death" and, convinced as he was of the hopelessness of humankind without religion, he sought to find for religion a basis of "scientific fact" that even the positive modern spirit must accept. (NB: in today's understanding basing religion on "scientific fact" is an unecessary and almost certainly unwise endeavour. I think Arnold was really meaning a kind of naturalised religion that was fully cognisant of scientific knowledge - something the philosopher and Unitarian minister L. P. Jacks tried to do.)

Anyway, the trouble with Arnold’s powerful metaphor of the receding tide is that in many people's imagination the tide's movement was truncated. The tide was in, now its out and that's that. Oh woe is me! This has both unnecessarily depressed us and also obscured from view a better way of dealing with the present decline in the authority of formal religious institutions.

On the one hand, the image has encouraged lots of people to expend a great deal of energy trying to stop the tide going out - a task as pointless and futile as trying to stop the tide coming in - as wise King Cnut knew. Tides go out and come in and will cycle like this until the end of this planet. All the earthly power in the world, whether invested in a Monarch or in an ecclesiastical institution, cannot alter the ebb and flow of any sea whether made of water or faith. At the present time the "Sea of Faith" (also the name of a liberal religious network) may well be on the way out and we simply have to face up to that. We may bemoan the tide’s withdrawal but nothing we can do can stop it. But to understand a beach is to understand that tides come and go. A day on a beach - which is nothing other than a metaphor for our world - is simply to find different ways to appreciate it in its various stages. Yes, we have to acknowledge that our own age is looking out towards what appears to be a still receding tide of faith but what is so bad about that? Although at this moment we clearly do not have the sea lapping delightfully at the feet of our deckchairs and the doorsteps of our beach-huts we can still enjoy the delights and pleasures of sun-bathing, the building of sand-castles, the exploration rock-pools and beach-combing. To turn to another metaphor, offered up by V. V. Rozanov via Richard Holloway, we can choose to sit in our chairs and look to the distance. My basic point is simple - there is plenty for us to do on the beach while the tide is out.

So, in the face of institutional decline, what we must do is actually quite simple. We simply have to continue to seek out what we think is the abiding essence of our faith and then attempt to present it to ourselves and others in simple and coherent ways that makes sense now. In just the same way that at low tide we sensibly put aside our dinghies, floats and water-wings and hunt out instead our kites, buckets and spades, in our faith we, too, need to be doing something similar in our church.

Our present state of knowledge lets us see that Christianity can no longer claim to be the only way of being religious or moral - it never could of course but we couldn't see that before. Its product which, in Holloway’s delightful turn of phrase, is a metaphysic rather than a Mercedes, is clearly no longer the only one on offer - nor exclusively the best. The radical liberal Christian tradition, to which we belong, has long accepted this state of affairs and early on realized that what we had to offer was something far more modest and gentle. We felt is was simply summed up in Jesus’ call to love God and to love our neighbour as ourselves. As Hosea Ballou (1771-1852), the great Universalist preacher, said: "We must not look for religion in creeds or formularies of human invention. We must look for it in the honest, the pious, the devotional heart; in the heart which truly loves God, loves its [sister and] brother also. The principle of love to God and goodwill is true religion."

This insight has meant that we have become reasonably comfortable in acknowledging our own tradition does not, need not, cannot, and should not occupy the whole beach. At its best this has meant we have chosen to stand aside and allow other viewpoints their rightful place alongside our own. In terms of the cross, the symbol of the Christian faith, we have deliberately but in a confident but humble spirit chosen to move it to one side.

In passing I note that on this open beach it seems to me no longer to be a question of the unity (or better meaningful co-operation) within Christianity alone but among all the world's faiths.

In a book called "Doubts and Loves" Richard Holloway, a former Bishop of Edinburgh and Gresham Professor of Divinity, reveals that he shares this view and he states his belief that modern churches should no longer present their positions as absolute but should learn simply to say to people, using another watery analogy: 'Come, try our view and see if you’d like to build your dwelling place at our bend in the river.’ Holloway is concerned, as are we, to deconstruct many mainstream Christian doctrines but, as he does this, he makes it clear that his "intention is positive; it is to craft from the Christian past a usable ethic for our own time." He presents a well-argued case for salvaging the challenge of Jesus by revealing the heart of his teachings and showing why they remain revolutionary, humane and of massive spiritual importance.

Here, on our little bend of the river, an image which I so much prefer to that of the tide and the beach, I'm simply trying to encourage us to live out a way of life that is lived in the love of truth and the spirit of Jesus. I try to encourage us to make welcome all visitors to our community and, if they like what they find, to bid them welcome to build their dwelling place amongst us. If they do not find us to be what they seek then I also hope we will lovingly assist them in seeking out another beautiful spot along the river bank. There are many, of course.

Although we now know the grand and often arrogant claims of Christianity can no longer be sustained, in our small and intimate place along God’s river with our simple rule of faith it seems to me we can still say confidently with the Psalmist "The lines are fallen unto me in pleasant [places]; yea, I have a goodly heritage" (Psalm 16:6 AV). Just because we know we cannot tell all the world how it should live and believe, this does not at the same time mean we cannot live faithfully and well by the goodness, truth and beauty which we have come to know.

In the end all I am doing is to encourage each of us to place a chair at our beautiful bend of the river, look into the distance and learn by heart my friend John Morgan’s wise words which I have brought before you on a number of occasions. For me at least, they seem to say everything that need be said about how we should practice our faith whether the tide be high or low:

May this be the basis of a gentle unity between Christians and all people of faith and none.
Email Post
Andrew James Brown
My name is Andrew James Brown. I’m a philosophically/theologically inclined writer with sympathies towards Christian atheism, D. G. Leahy’s “thinking now occurring for the first time”, a Lucretian inspired religious naturalism, new materialism and Kyoto School philosophy; also a photographer, cyclist, walker and jazz bass player. In addition to this, I’m the minister of a small, liberal-religious, free-thinking community in Cambridge (UK)