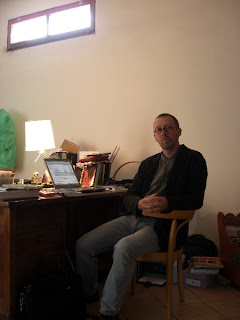 One of the things that has driven my writing and thinking over the past eight years has been a growing recognition that unless those of us who consider ourselves to be liberal religionists get ourselves 'into shape' we will continue to ceding ground to increasingly illiberal and dangerous religious forces. But a real danger presents itself when you begin to unfold what that getting 'into shape' could entail. The truth is I beginning to realise that done in a certain way such a 'fitness' programme can mean that liberal societies (national and small scale ones such as individual churches) start adopting religious and political strategies that are not that far removed from those they seek to counter. With a little space to think - that is to say a way from the pressure of having to write a sermon every week - I can see that, to some extent, this criticism can be applied to my own work, at least in my recent attempt to underpin the kind of liberal Unitarian Christianity I practice with a Unitarian metaphysics largely derived from Spinoza.

On the one hand the danger is that in pushing such a metaphysics one is, tacitly if not explicitly, trying to express an orthodoxy (albeit one with liberal intentions) and, on the other, the danger is that one is in truth simply building a house on sandy ground (for there is never going to be a way to prove - to oneself or to others - that one's preferred metaphysical system is true absolutely). So dogma on the one hand, self-deceit on the other. Hmm.

If one takes these two dangers seriously (as I am) then a third danger arises which is that one can come to equivocate dogmatically. It becomes a matter of dogma not to get 'into shape' - not to follow a particular faith with passion and commitment. Here you simply end up with a version of the first danger.

So what on earth to do? It is precisely at this point that I think a re-examination of Wittgenstein's work may prove helpful because he offers us a way to re-engage passionately with religion (in the context I am speaking that is a religion based upon the teachings of Jesus though others may chose something different) but without at the same time thinking that our religion 'says' anything true or false about our world. What our religion can do is help us live in a particular way and be changed in ways that are beneficial to ourselves and, we hope, others. In other words our religion can help us show something that we will never be able to say.

In "Wittgenstein: The Duty of Genius" (p. 305) Ray Monk cites Wittgenstein as saying:

I can well imagine a religion in which there are no doctrinal propositions, in which there is thus no talking. Obviously the essence of religion cannot have anything to do with the fact that there is talking, or rather: when people talk, then this itself is part of a religious act and not a theory. Thus it also does not matter at all if the words used are true or false or nonsense. In religion talking is not metaphorical either; for otherwise it would have to be possible to say the same things in prose.

Anyway, with these thoughts in mind I went to Avignon to see my friend Ronald Gabriel yesterday (Wednesday) to have a talk about my present work and I began a long and complicated exposition of what I might do. Eventually he, quite rightly, observed that I seemed to be heading in the direction of articulating a new kind of orthodoxy (albeit with "liberal" pretensions) - which is precisely the thing I have been rebelling against for so long. He continued by asking me what was wrong with simply restating Jesus call to "Love thy neighbour as thyself"?

That really struck home and I realised, with uncomfortable clarity, that I was trying (once again) to say what can only be shown. This 'saying-of-what-cannot-be-said' can only become a huge obstacle obscuring what is plainly before one's eyes namely that it is enough just to follow the example of Jesus.

All of which leaves me with an interesting dilemma because, as you will be aware, I am here in the south of France on a sabbatical during which I had every intention of writing some summary of my thinking! Whatever else I will be doing (and that includes a fair bit of cycling and Tai Chi) I will be revisiting very carefully Tolstoy's Gospel in Brief as a good place to begin to reorientate myself and, if you are in anyway minded to agree with me, to help you do likewise.

The Gospel in Brief can be downloaded as a .txt file here
As a .pdf file here
And ordered here

Before signing off I want to make it absolutely clear that in all of the above I am not claiming to be presenting an accurate interpretation of what I think Wittgenstein himself thought - I am simply not a Wittgenstein scholar - all I am doing is using his writings as a springboard for my own thinking.

Lastly, for your delectation, a view of clouds over Mont Ventoux taken on yesterday 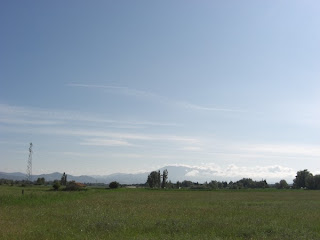 Anonymous said…
I was struck by this metaphor: "the danger is that one is in truth simply building a house on sandy ground (for there is never going to be a way to prove - to oneself or to others - that one's preferred metaphysical system is true absolutely)", as it immediately made me think of the well-digging metaphor.

You may know it: spiritual dilettantes go around digging shallow holes, ignoring the rewards of concentrating on digging a deep well in order to get at the living water.

So what happens to your dilemma if you stop building (or building upon) and instead start uncovering? Same source, same general location (to extend the metaphor), perhaps even some of the same techniques--but a different orientation?

As someone not theologically trained, I'm both amazed at systematic approaches to eternal questions and sometimes dismissive of them as "saying what cannot be said."

Andrew James Brown said…
Thanks Kenneth, a good point. I'll think more about this.
Wittgenstein seems to be saying (and if he is then I think I agree with him) that philosophy is really about removing illusions to avoid confusion rather than stating any propositions or doctrines about the world. In 1932 he noted "All that philsophy can do is to destroy idols. And that means not making any new ones - say out of the 'absence of idols'."
In the light of your suggestion I guess one has to be careful about engaging in the kind of digging that is still a kind of building on sand. I suppose that what one needs is a digging (deepening or clarification) that doesn't itself become an idol.
Maybe that can only be done by getting on with the difficult but ultimately rewarding task of loving ones neighbour as oneself?
Certainly your point about holding a "different orientation" is very important.
So thanks again.
6 June 2008 at 17:35

kbop said…
and the Mont Ventoux beckons in the distance....