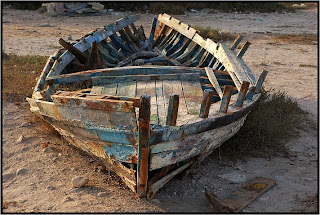 What I want to do in this address is to introduce to you just one important and I think beautiful idea that was offered to us by the philosopher Heidegger. I also bring it to your attention because I think it can be of practical help in our attempt to gain genuine happiness in, and enjoyment of, the world.

But I'll start with a well known parable of Jesus' from Luke chapter 15:

". . . what woman, having ten silver coins, if she loses one coin, does not light a lamp and sweep the house and seek diligently until she finds it? And when she has found it, she calls together her friends and neighbours, saying, 'Rejoice with me, for I have found the coin which I had lost.'"

Now, if the story stopped just there we might be able to make use of it to speak about the role of money in people's lives, and maybe makes some connections with issues of social justice. But, in the context of Luke the passage is tied in closely with God and it concludes as follows:

Now I've always been rather puzzled and somewhat unhappy about this parable whether it is used as an illustration of something good or ideal in the religious or spiritual life or as saying something true about the fundamental nature of reality. I really don't like, nor do I believe in the truth of the idea that human-beings are things, like coins, that are lost and/or found by divine beings (becoming, quite literally, coins in the divine economy).

This parable and my ongoing concerns about it came back into mind this week because, as I was leafing idly through a book of quotations entitled "A Celebration of Humanism and Freethought", I came across the following extract written by W. Beran Wolfe (1900-1935) from his book entitled "How to be happy, though human":

"If you observe a really happy man you will find him building a boat, writing a symphony, educating his son, growing double dahlias in his garden, or looking for dinosaur eggs in the Gobi Desert. He will not be searching for happiness as if it were a collar button that has rolled under the radiator. He will not be striving for it as if it were a goal in itself, nor will he be seeking it among the nebulous wastes of metaphysics.
To find happiness we must seek for it in a focus outside ourselves."

Whatever we think the word 'god' and 'the angels' means, and however we individually might use them (if we are minded to use them at all), Wolfe's examples seem to me to be more creative and positive poetic images to play with than the thought that in heaven there are divine beings who worry about us in a similar fashion to the woman of the parable which, in turn, leads them to a desperate and unseemly scrabbling to find us poor lost things under the cosmic equivalent of a radiator.

I think most of us would agree with Wolfe that happiness (human or divine)  is found, not in things but, instead, in free, focussed creative activity that the things we call things to be present to us in this world as things. The key move to observe here is from things to activity. But can things also be understood as activities?

Let's think a little more about Wolfe's examples. Wolfe's point is that the happiness we seek is not found in the boat - a thing which can imagine could be lost and found (and I'll return to this in a moment) - but rather in the activities that are gathered by it. Hold on to the thought of 'gathering' for it's going to be very important.  We may, of course, likewise say similar things about a symphony, an educated child, double dahlias, and the success that is a found dinosaur egg.

But we would be deluding ourselves if we were to think that the thing made - let's stick with the boat for now -  means nothing. It is clearly important. So let's ask, a la Heidegger "what does it mean to say that this boat is a thing?"  In his original example Heidegger uses the example of a jug - which is why a jug appears in the title of today's address. Heidegger employs some etymology here which, though questionable in some respects, does allow him to articulate the basic idea and it is that which concerns us today. He points out that the Old High German word for "thing" (dinc) means a "gathering." From this he draws the conclusion that a "thing" is something that gathers.

This boat - its significance, its meaning, its sense - is always given to us in the context of a complicated set of social practices alongside other "things" such as river, sea, wind, sailing clubs, charts, navigation, tides, buoys, etc., etc.. The first point being that the boat doesn't, and cannot, have an independent existence - it is always there with other things. In the second instance Heidegger believes that "things" such as this boat also bring together what he poetically calls "the fourfold" - namely, earth, sky, divinities and mortals. (Think here of a cross, with the vertical axis having "earth" at the bottom and "sky" at the top and the horizontal axis having "divinities" on the left and "mortals" on the right - all four gathering together at the centre point of the cross). A "thing" for Heidegger is the "point" where these four are gathered together and all "things" - sometimes clearly sometimes obliquely - speak somehow of the fourfold.

In brief "earth" stands for the dark and ultimately mysterious material out of which everything is made - here, in the boat, it is the wood, steel, canvas, varnish etc.; "sky" stands for the light, space or clearing in the world in allows these things to become present to us as they emerge from the dark materials that form them to be built, seen, named and used by us; "divinities" stands for the fact that these things can be for us messengers of a "place" of haleness and wholeness that seems to transcend this world and which gives us hope for the future - a feeling every sailor feels as they head for open water; and "mortals" stands for the fact that the existence of this "boat" - as with all things, including us - is contingent upon a vast constellation of circumstances that, one day, will no longer hold together - the boat will rot, be shipwrecked.

It seems to me that Heidegger's picture encourages us to consider whether what we commonly call a thing is not so much a "thing" but rather an astonishingly gifted set of temporary co-ordinates at which point there is an active gathering of the fourfold, a gathering that, under certain circumstances, is seen by us as a boat, under other circumstances as a symphony, a double-dahlia, a person at school or hunting for dinosaur eggs or even a humble jug. It's all about gathering and so it's all about activity and in this endless activity no-thing can ever be lost because there really never were such things only gatherings.

So, when we say something is lost we may really be saying something like that "a particular gathering is no more". We may deeply regret the demise of some of these gatherings - I do not deny that and that feels like a loss - but, if you follow Heidegger, one can also say that no-thing has ever been lost anywhere in the universe. That, surely, can bring us some genuine comfort. God-or-Nature never needs to scrabble around under cosmic radiators to find you and save you because we are all already saved in our many creative gatherings - in the building of communities, the building of boats, the writing of music, the education of our children and each other, the nurturing of a garden, or in the pursuit of new knowledge whether it concerns dinosaurs or the most distant galaxy and its innermost workings.
Email Post
Labels: Boats children dinosaur eggs double dahlias gathering the fourfold Heidegger Jesus jugs silver coins symphonies W. Beran Wolfe
Andrew James Brown
My name is Andrew James Brown. I’m a philosophically/theologically inclined writer with sympathies towards Shin’ichirō Imaoka’s understanding of free religion (自由宗教), Christian atheism, D. G. Leahy’s “thinking now occurring for the first time”, a Lucretian inspired religious naturalism, new materialism and Kyoto School philosophy; also a photographer, cyclist, walker and jazz bass player. In addition to this, I’m the minister of a small, liberal, free religious community in Cambridge (UK)

Yewtree said…
I think it's a Buddhist saying that "Everything changes, everything is always becoming something else, nothing is ever lost".

Your bit about the divine looking under the cosmic radiator to find us reminds me of the jokes in response to the question "Have you found Jesus?" such as "Oh, I didn't know he was lost" or "Yes, he was down the back of the sofa cushions all the time".

And the bit about happiness being the result of activities rather than things reminds me of the excellent book by David Smail, Taking Care which reminds us that if we worry about our relationships, we will put too much burden on them, whereas if we focus on shared activities, relationship will emerge naturally.
22 March 2010 at 11:12