Bowling a curved ball at Pentecost - "Because of the strike, she was unable to repair the lock in time to be able to leave for her holiday." 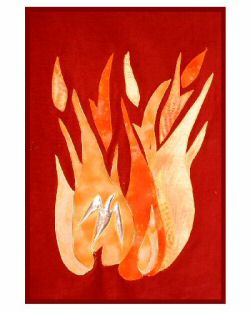 The story of Pentecost (Acts 2:1-21) is important to mark because it has come to be understood within the Christian tradition as signifying, in some way, the beginning of our complicated community of faith. However we may relate to that tradition here - whether we would like to reject, recast, reframe or reinterpret it - the story undeniably stands at a significant point in our procession of faith. We simply wouldn't be here today without this complex procession of faith one of whose key reference points is this story. Quite understandably, from time to time (usually at Pentecost) we read it and try to understand what it means.

But, for me and I hope for some of you too, what it is to understand a story has been undergoing a change recently. Once we might have thought that there was (or could be) an eternal truth of a story which could be brought out into contemporary light by a combination of historical, linguistic and social and anthropological studies and then filtered through the various interpretative lenses available to humans (such as, for example, metaphor, analogy etc.). The result, it was hoped, would be a fairly simple iteration that the meaning of "such and such" story was such and such. We once hoped that we might be able to develop some kind of reliable theory about what the story truly meant and what it told us about the world.

But ,as you know, I have become increasingly suspicious of this approach and have instead tried to read our stories not as revealing parts of a theory about the world but as part of a way of being in the world - and a dynamic, unfolding not-yet world at that.

To do this I need to bowl a curved ball that is difficult to play so that you are forced to make a creative, unexpected stroke at the matter rather than just fall back on habitual and probably mostly defensive strokes. So I begin today in a deliberately enigmatic way with this sentence:

"Because of the strike, she was unable to repair the lock in time to be able to leave for her holiday."

Here we have a sentence through which I hope will help reveal that what seems obvious for us - in terms of language - is, in fact, dependent upon the phenomenally complex context into which we are all born - Heidegger would say we are "thrown" (Thrownness - Geworfenheit). This thought has arisen in our age for a number of reason but the one I draw upon today is from the field of Artificial Intelligence (AI). Here is how Timothy Clarke sums up the basic issue:

"The issue here is that what is obvious for us is actually multiplicitous and extraordinarily subtle when it comes to thematizing it in a way that spells out every element involved in the way a computer would require. For instance, let us unpack the simple words 'unable' and 'able' (`. . . she was unable to repair the lock in time to be able to leave for her holiday'). The normal understanding of the sentence — though nowhere explicit in its terms — would include the fact that the woman cannot repair the lock herself. We know that this job usually requires a locksmith, and also that most people are not locksmiths. So we probably read the verb 'unable' in the sense of her not succeeding in finding a qualified person in time ('she was unable to repair the lock in time to be able to leave . . .'). We would probably reject the possible meaning that the strike somehow hindered her own skill in repairing locks herself. Our understanding of the sentence is confirmed, without our even thinking about it, by reference to a 'strike': we infer, again without being told explicitly, this means a strike of people qualified to effect the repair, or of people necessary to them in some way. In fact, when we pause to unravel it, even the most mundane sentence or action draws on a vast and inchoate mass of assumed understanding that gets bigger the more one tries to explicate it. Thus, when we come to the word 'able' later in the same sentence we understand at once that it refers to a different sort of capability, not a physical one but a psychological one: she is doubtless perfectly capable of leaving for her holiday with the door broken if she wanted to, but is not 'able' in the sense of feeling she cannot risk it. Understanding this inability also requires an indefinite amount of background knowledge about how human beings live, for instance about housing, about risk of theft, which in turns implies understanding of notions of property, of law, etc. This analysis could go on, unraveling further and further layers of what for us is obvious in this obvious sentence — that the woman is dealing with the house she lives in for instance. The point is that all of these things are evident to us, even to the extent that this spelling them out seems slightly absurd, yet, decisively, this also shows that the modes of understanding at issue are so subtle and multi-layered that they could probably never be modeled in the kind of self-contained formalized theory required by a digital computer" ("Critical Thinkers - Martin Heidegger", Routledge, 2001 p. 14-15).

Now just hold in mind that all this complexity (and here we've only just scratched the surface) all this complexity is revealed by the briefest consideration of an iddy-biddy "straightforward" piece of reportage only twenty-one words long and which is firmly situated in our own age and culture - "Because of the strike, she was unable to repair the lock in time to be able to leave for her holiday."

I hope you will be able to see that this insight has a profound affect upon  the way we should reflect upon the meaning of a longer text which seems to be claiming to be a report of certain events that are just shy of two-thousand years old and which have been translated from Greek into English and before that, probably, also requiring a translation from Aramaic into Greek.

How many nuances, implied and assumed obvious connections and meanings in this text are simply lost to us today? Add to this that our contemporary view of how the world works and what is, or is not, an acceptable and/or legitimate way of reporting events that occur in the world and you quickly realise you are before a text whose first century meaning must remain very to us, at least very mysterious if not utterly inaccessible. And please don't be seduced into thinking that just because the individual words that constitute the sentences of this story still make a sort of sense in our own time that we are, therefore, able to grasp the basic meaning of the text because, as Timothy Clarke further observes, "to recognise what a 'holiday' is involves a sense of what 'work' means, and to *need* a holiday of to feel tired. This involves not some theory of the concept 'holiday' but an empathetic sense of the embodied human world, its limits, its weariness and its recreations. This sense is not a theory at all" (ibid. p. 17).

In the same way what it would be to recognise what "divided tongues, as of fire" are, and what it would be to have a single "tongue of fire" rest upon one's head clearly requires something more than just the words themselves - one would need  an empathetic sense of the embodied human world in the first century, its limits, its understanding of in what 'fire' consisted as well as its activity and we simply don't have access to this. Consequently - especially in liberal circles - we often retreat into saying it is simply a metaphor for what we call, for example, inspiration. Well perhaps it is - we can certainly read the story that way - but I have a sneaking feeling that this is to pretend to have knowledge about what the story really meant for those early Christians when in fact we simply cannot really ever know.

This may seem to some to be a counsel of despair but I don't think it is - it should instead enable us to free ourselves from slavery to the text or, more pertinently, slavery to the idea that this text contains a universal and everlasting truth that we must, at all costs, uncover. That project has led to innumerable truth claims many of which have come into fruitless conflict with other truth claims and, as a consequence, millions and millions of lives have been lost and many millions more whose lives were utterly ruined.

One key thing I am trying to get us to see - with real confidence - is that "all intelligibility and all intelligent behaviour must hark back to our sense of what we *are*" (Dreyfus and Dreyfus cited in ibid. p. 16) and not to some purported abstract universal truth that is supposedly contained in the Biblical (or any other) text.

And here I shall bring us to a certain kind of conclusion.

Freed from the slavery to the idea that the text contains an immutable (God given) pure truth and opened up to realisation that all intelligibility and all intelligent behaviour is dependent not upon our sense of what our forebears were - which we cannot recover - but rather of *our* sense of what *we* are then this story becomes a beautiful and striking example of how we might move into an untraditional - and therefore unknown - future in a *traditional* way.  (Such a move - if it is possible and after reading Lear's "Radical Hope" I think it is - helps us be more confident in traversing wildly unstable and confusing times and to arrive at some stable and life-affirming position that is continuous with, but not identical to, our community's historical self-understanding.)

The Pentecost story can help us feel (not theorise) what it might be like to have overcome innumerable old cultural barriers (in the Pentecost story primarily local language and belief) and so move more confidently into a world more pluralistic and complex than our forebears could perhaps ever have imagined.

Read this way the Pentecost tale becomes a traditional story, not about the creation of a single religion - namely Christianity - but an intuition of what it would be like to move into a world without impenetrable local cultural barriers and so, to cite the theme from my address at the end of April, enabling all of us to "ride the crest of the world's continued birth" and able to respond to "the flux of the world with care, judgment and sensitivity".
Email Post
Labels: Acts Bible Heidegger Jonathan Lear Pentecost Timothy Clarke
Andrew James Brown
My name is Andrew James Brown. I’m a philosophically/theologically inclined writer with sympathies towards Shin’ichirō Imaoka’s understanding of free religion (自由宗教), Christian atheism, D. G. Leahy’s “thinking now occurring for the first time”, a Lucretian inspired religious naturalism, new materialism and Kyoto School philosophy; also a photographer, cyclist, walker and jazz bass player. In addition to this, I’m the minister of a small, liberal, free religious community in Cambridge (UK)

Yewtree said…
That's a great illustration of why one cannot read these stories without reflecting on the context and what they mean in different contexts.

I think it's really important work that you are doing with these reflections; and I admire the subtlety of your writing.
24 May 2010 at 11:56