As for ceremony, already the leaves have swirled over, the wind has spoken 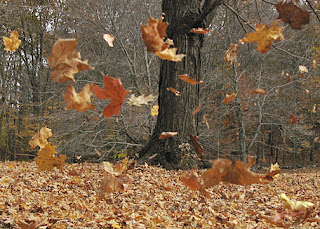 We have just been through a week in which we have seen yet further examples of the deeply problematic nature of religion - especially in its monotheistic varieties. True, not all such religion is (or individual religious people are) so problematic, but this week's events, as well as, of course, their proximate cause, namely the horrific day of September 11th 2001, have made me hang my head in despair and ask, like many others, whether the world really wouldn't be better off without it at all.

I think this despair feels particularly painful when, like me, although you simply no longer believe in the God that is claimed to stand behind the believers engaged in this unbelievably stupid and dangerous spat you also still feel that religion - at least as we (late-twentieth, early twenty-first century westerners) have understood it - has bequeathed us two useful, even vital, sacramental energies. Energies that would be lost in any thoughtless abandonment of old-style metaphysical religion.

The first energy is that which can limit us in the face of hubris; the second is one which can transform us in the face of complacency (Edwards p. ix). We know, of course, that traditional expressions of religion haven't always used these energies - we all know examples when religion's hubris and/or its complacency has seemingly been infinite - but they have always paid lip-service to them and, in its foundational figures, it has revealed them at work positively in the world.

My question - developing in various ways since 9/11- is how might we continue to access these sacramental energies without resorting to the language of the gods/God with which they were once so indissolubly linked? In short, what religion might look like after religion - after God? I know this is a risky and controversial thing to do from *within* religion but the philosophical, cultural and political circumstances are such that I cannot see how one can really avoid the matter. Anyway on a weekend so dominated by dysfunctional ways of being religious that I, and probably most of you, can simply no longer support - indeed that we find positively repulsive - addressing this question seems to be a potentially positive and constructive response.

Now, if you are looking for a glimpses of what religion after religion might look like then there are many philosophers. writers, musicians and poets who offer them up either deliberately or by accident. I have a long list of people whose work I'm looking at but rapidly edging to the top is the truly astonishing poet Mary Oliver.

In the middle of this week's madness I, thankfully, lighted upon a poem of hers which at first you may think has nothing to do with my subject so far but which I think does. It's called "Encounter":

I lift the small brown mouse
Out of the path and hold him.
He has no more to say,
No lilt of feet to run on.
He's cold, still soft, but idle.
As though he were a stone
I launch him from my hand;
His body falls away
Into the shadowed wood
Where the crackling leaves rain down,
Where the year is mostly over.
"Poor creature," I might say,
But what's the use of that.
The clock in him is broken.
And as for ceremony,
Already the leaves have swirled
Over, the wind has spoken.
(Mary Oliver, New and Selected Poems Vol 1)

So, remember, what I think I can see expressed in this poem - at least as I read it in the immediate context of the past week - are those two energies: one which limits us in the face of hubris and a second which can transform us in the face of complacency but also recall that I'm looking for access to them without resorting to the old language of the gods/God. Before I continue it is vital to realise that, like all good poems, 'Encounter' resists any attempts at definitive interpretation, I have simply looked more closely at this one because it seems to express both these energies well. Let's take them in turn.

The energy that challenges our hubris is revealed through the poem in a number of ways. The first is through the example of the poet herself in the mindful and alert way she walks through the world observing the many things that presence before her. She does not charge *across* the world thinking she has some privileged status above it but moves *within* the world carefully, mindfully and lovingly. The poet exemplifies a profound lack of hubris and in so doing she presents us with a model of being that is powerful enough to make us desirous of following her in the sense that we simply feel it would be good to be like that ourselves. There is no extrinsic reason for this feeling (i.e. no order from the gods/God on high), rather we simply see a way of being in the world that speaks, for us (late twentieth, early twenty-first century Westerners), with real authority. We see in the poet an example that is somewhat like what it seems the crowds saw in Jesus, someone who 'taught them as one who had authority, and not as their scribes' (Matthew 7:29).

I think the energy is also revealed by alerting us to the transitory quality of life, not only for the small brown mouse but also, in a gently implied way, for us. In the image of the broken clock we get a further image which reminds us that there is something intrinsic about individual expressions of life that breaks in time and which cannot be rewound or fixed - not by human craftsmanship nor, in the absence of the gods/God of old, even by divine craftsmanship. The world is the way it is and this must simply be acknowledged - the clock here *is* broken. Years of language use tied up with the imagined perfection of the gods/God may tempt us to utter words like "poor creature", implying  something has gone wrong - something which is only made right in heaven or the world beyond - but today I think for us (and I only speak of us) such words are increasingly feeling futile and/or use-less. However, although the words "poor creature" and the like no longer seem to attach to anything meaningful - merely free-spinning wheels which connect to nothing - there is clearly still the need for us to express some appropriate identifiable response to life and, therefore death. Here I can begin to turn to the second energy, that can transform us in the face of complacency.

It is clear that the first energy, that which jumps on our hubris, can cause us to become complacent about our ability to change anything at all, to do anything positive, lasting and meaningful ourselves. But, just as the old religious language could speak of God who challenged our hubris as being like a caring father who can go on to help us to loving, positive action within human limitations, after God it is I think possible to find something similar.

Again it seems to me that the poet reveals this herself with great natural authority. Notice that we see her acting as *part* of the world - not *apart* from the world. Her recognition of this co-working and co-mingling empowers her to respond in ways that don't require the construction of elaborate theologies or artificial religious practices - it is enough to notice that we are in the world and, in response, to speak of this in a poem or a spontaneous act and, therefore, to pass the encouragement on to others - us - to do something similar.

Her response (in addition to the poem) is, as we see, to pick up the brown mouse, observe its present state (and so her own present state) with a mindful detachment - a position inherently compassionate. Her throwing of the mouse into the forest is not one of disgust, despair or disrespect but is a co-working and co-mingling in the 'same' process that is gestured to through the image of the wind swirling the leaves over the dead mouse, a process which is the mouse's return (all life's return) to the dark mysterious matter of the world - a dark mysterious matter that will, in some way, at some time, presence again in the clearing that is this world whether as the material element of a fungus, a tree, a worm, a bird, a deer or as another poet who will see a dead mouse and respond to it in their own way with mindful compassion.

As I looked with some horror on the religious craziness of the week, I found great solace in Oliver's response to the death of the brown mouse. The poet's actions didn't build up a set of expressible beliefs (even though my words might suggest that) nor texts and practices which can be used to terrorize each other, damn each other to hell and encourage people to descend into a spiral of violence that threatens everyone. All she did was access two powerful energies that gave gentle and deep, local meaning to her life and, through the poem, to us. There may be no sacred text here, no external formalised ceremony but there is a sense of meaning, there is a sense of the divine. In short there is religion but of a kind we have yet fully to realise in our corporate life.

Yewtree said…
I really missed your blog while you were away.

This is a wonderful post and very gently articulates what I have been struggling to say in several different ways: that religion is not all about fundamentalist nutters threatening to blow things up and burn things because the world isn't how they think it should be.

Many Pagan friends seek to blame fundamentalism on monotheism, claiming that polytheism is inherently more tolerant. I disagree with them; I think polytheism can be intolerant too - look at what happened to Socrates.

I think the problem is twofold: assuming that metaphors for the ineffable mystery are literal, concrete and graspable; and assuming that religion is an external process, something you do, a set of laws you adhere to, rather than an internal process and an internal apprehension of harmony.
17 September 2010 at 12:04

Thanks for the comment. Alas I don't know who took the photo. It was sent to me by a friend - and I don't think they took it. Anyway, the credit should go to that anonymous photographer - if you ever find out who it was do let me know.