To speak humanly from the height or from the depth of human things, that is acutest speech

Over the past two and a half years I have been trying to help us identify what might be the appropriate sources of authority for a contemporary liberal religious community which has come to distrust metaphysics. One of our sources is clearly the natural sciences. We have come to trust both its methods and its discoveries and they give us a certain kind of knowledge of the world we can imagine and experience as somehow inevitable. The other source is, I think, found in art - in the works of many writers, poets, painters, sculptors and musicians which speak to us in a way that also feels true, right and inevitable. They have, for us, a quality which means we feel they can be trusted to help us live in the world with appropriate confidence and groundedness. But in key respects the rightness - the truth even - of art is much harder to talk about than the rightness and truth of science. This address is, therefore, a preliminary reconnaissance mission over this potential second source of authority and I’d like to hang some sketchy and tentative thoughts about this source on a stanza (XIX) taken from Wallace Stevens’ poem Chocorua to its neighbor and a complete short poem called Of Modern Poetry. First the single stanza:

However, as I have noted in other addresses, the project of finding and coming to know such a transcendental reality (God) feels as if ‘it cannot be’ (at least not at this point in our history) and so we need to find another way of speaking so that we may ‘transcend without transcendence’ (Bloch) - which is another way of saying we need to find a way that lets us see things as they are but anew, under a new aspect or transfigured. Stevens gives us a way of gesturing to this in his poem The Man with the Blue Guitar when he speaks of a ‘a tune beyond us, yet ourselves.’

In Stevens’ view the acutest speech - that is to say the speech which can be for us genuinely persuasive - is that which speaks ‘humanly’ of the highest and lowest things ‘human things’.And here Stevens really is talking about things we know. The language of the natural sciences is one way we already do this kind of talking - or we at least consistently and rigorously attempt to do this in science. But what might talking about things mean in the realm of the arts - specifically in the real of poetry? Stevens’ poem Of Modern Poetry may be cited as a particularly rich example. Notice that Stevens is wholly aware of the fact that we find ourselves in an epoch in which the old certainties are gone and we now inhabit one in which we must in some way recreate the whole theatre of our being.

The poem of the mind in the act of finding
What will suffice. It has not always had
To find: the scene was set; it repeated what
Was in the script.
Then the theatre was changed
To something else. Its past was a souvenir.

It has to be living, to learn the speech of the place.
It has to face the men of the time and to meet
The women of the time. It has to think about war
And it has to find what will suffice. It has
To construct a new stage. It has to be on that stage,
And, like an insatiable actor, slowly and
With meditation, speak words that in the ear,
In the delicatest ear of the mind, repeat,
Exactly, that which it wants to hear, at the sound
Of which, an invisible audience listens,
Not to the play, but to itself, expressed
In an emotion as of two people, as of two
Emotions becoming one. The actor is
A metaphysician in the dark, twanging
An instrument, twanging a wiry string that gives
Sounds passing through sudden rightnesses, wholly
Containing the mind, below which it cannot descend,
Beyond which it has no will to rise.
It must
Be the finding of a satisfaction, and may
Be of a man skating, a woman dancing, a woman
Combing. The poem of the act of the mind.

This poem is so rich that I simply cannot begin to do it justice in any way and I’ll almost certainly return to it because of this, today I simply focus on our pressing need to learn how to begin to speak the ‘acutest speech’ - namely that which ‘speak[s] humanly from the height or from the depth of human things’.

So, back to the question, surely simply talking to each other about ‘a man skating, a woman dancing, a woman combing’ and suchlike is insufficient to replace our old religious speech? Well, the success of the project hinges on the ability of certain artists to say these things in a way such that they strike us with ‘sudden rightness’ in which we find a deep ‘satisfaction’ and meaning.

(NB This does not reply upon us all liking the exactly the same poems, music, pictures, novels or sculptures - it relies simply on the fact that art forms are capable of striking us with sudden rightness and bring us real satisfaction)

So what is this rightness? My guide here is Simon Critchley and his wonderful book Things Merely Are (especially Chapter 3 pp. 33-44). This is a very accessible philosophical meditation upon Stevens’ work and in it he offers four takes on what this rightness might be.

Firstly he observes that the dark metaphysical activity of the poet is presented to us under the form of a musician. Lest Stevens be misunderstood at this point the ‘dark metaphysical activity’ of the poet is to help us transcend without transcendence - it is not the kind of metaphysical activity of old. So, in musical language, we may say this rightness is about sensing a harmony between us and the world which Critchley calls ‘emotional attunement’ (p. 39). So, think of, for example the skating man. When presented to us in a certain way (in this poem starkly, suddenly and tersely), our imagination is moved to consider the movement of body and mind over ice and it strikes us as being harmonious, satisfying and meaningful. Even if when we are not skaters ourselves we can imagine what it is like to be like a skilled skater and in harmony with both ourselves and the environment. Imagining this feels like, to jump back to the musical metaphor, singing ‘a tune beyond us, yet ourselves.’ This might help us sense why the painting by Henry Raeburn called The Skating Minister remains so popular (the picture at the top of this blog).

The second point Critchley makes is that this way of speaking relies upon sudden rightness which he helpfully calls an ‘arresting expression’ (p. 39). This clearly resonates with the musical imagry used in this poem and I’m sure we are all aware of this kind of thing when, for us, we hear just the right note or chord and are caught up in the sudden rightness of what we hear. Again we might say, this is ‘a tune beyond us, yet ourselves.’ But notice that any arresting expression relies on it being transitory and ending, ultimately, in silence. If it stayed eternally present it would cease to be arresting and quickly become merely an irritating noise.

Thirdly there is the way such rightness springs from ‘the dark’ - from the unknown and unknowable dark ‘material’ that makes possible anything at all. The rightness is felt when a chord is struck, or a word is said that momentarily lights up the world. In that light or clearing in the ‘darkness’, we can see and experience a harmony between us and the things of the world. It’s not precisely that the world changes in these moments (or that we change the world) because for Stevens things remain what they once were - but suddenly, in the clearing, we can not only see the world differently but also we can see that we can see the world differently. That’s a horrible grammatical construction so just recall Wittgenstein’s duck/rabbit here. You can see either a duck or a rabbit and, although at no point can you see a Dubbit or Rabbuck you can ‘see’ that you can see it as a duck or rabbit. See below. 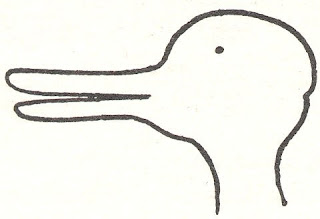 Lastly there is simply sound itself - whether it comes from the guitar or is the spoken word - and we will all know that there are some words/sounds which are for us simply right. Words which, as Critchley says, ‘in passing rightness produce in us an experience of deja vu or temps perdue.’ In a wonderful piece of rightness the three town names he cites as examples are all ones I know and have myself enjoyed as simply sound and so I cite them here as also being my own examples: ‘Letchworth Garden City’, ‘Fingeringhoe’ and ‘Biggleswade’.

When art speaks of things as they are and, simultaneously, offers us ways to see them under a new aspect or transfigured, at those moments I think we begin to speak humanly from the height or from the depth of human things and in so doing we also begin to speak in an acute, religious way that is appropriate to our age. In the work of poets like Stevens (and I would add Mary Oliver and Robert Frost) we are tantalisingly gifted with a language which is able to speak of transcendence without transcending - gives us ‘a tune beyond us, yet ourselves’. This kind of language, hard though it may be to speak at first, is, I think powerful enough to re-enchant and root our world even as we stand in the shadow of the death of God.
Email Post
Labels: Chocorua to its neighbor Henry Raeburn Of Modern Poetry Simon Critchley The Skating Minister Things merely are Wallace Stevens
Andrew James Brown
My name is Andrew James Brown. I’m a philosophically/theologically inclined writer with sympathies towards Shin’ichirō Imaoka’s understanding of free religion (自由宗教), Christian atheism, D. G. Leahy’s “thinking now occurring for the first time”, a Lucretian inspired religious naturalism, new materialism and Kyoto School philosophy; also a photographer, cyclist, walker and jazz bass player. In addition to this, I’m the minister of a small, liberal, free religious community in Cambridge (UK)