. . . a little red-winged bird, shining like a burning bush, singing like a scripture verse, everything is holy now - Third Sunday in Advent 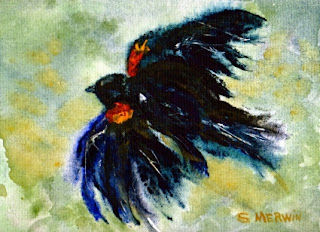 He means that, in the hands of a mature, experienced player, if you commit to a note in the right way it can always be made to work, somehow. (None of this means every player achieves absolute success here - even the greatest.)

But, as my own jazz students display only too well, when they begin to learn how to play the world is full of wrong notes. Armed with the hopeful maxim that there are no wrong notes they pick up their instruments, play a phrase over a chord, only for it immediately to resound with handfuls of wince-making wrong notes. But, they puzzle, if it is true that there are no wrong notes how come they produce such a painful cacophony? That there is no instant access to this freedom is a painful discovery to make - more painful even than the playing of wrong notes.

And so, for those who are determined to push on to the promised freedom, the difficult but necessary process now begins as, with them, I start to lay-out certain structures of the language of jazz that, when understood and embodied by a player, begins to indicate to them in what might consist the possibility that there might be such a thing as the rightness of wrong notes.

This 'in what consists the possibility of the rightness of wrong notes' I take to be analogous to the oft made liberal religious claim that it is possible to understand that 'every thing is holy now.' But in order to unfold this thought in a meaningful way I need to ground my comments in our reading from the Gospel of Luke which is known as "the Annunciation".

The trajectory of the whole Christian narrative, when understood as something radically open-ended and unfolding, is one which clearly moves from heaven to earth. It is important to see that our present-day secular, pluralistic, post-denominational and post-Christendom society, and our particular religious and political challenges in it, can be understood to be part of this open-ended and unfolding narrative. As I suggested last week I think we are always being unwound (Verwindung) into our present world - a process which contains (as Gianni Vattimo notes) no sense of loosing a connection with a past that, not only still has much to say to us, but which actually makes it possible in the first place for us to live in and reflect upon a world that shows up to us as intelligible and containing meaning and worth.

This earthward, self-giving trajectory of the Divine is first glimpsed by our culture in the creation stories of the Old Testament but it begins to reach a particular focus in the New Testament stories of Advent when Mary is told by the angel that she will conceive and become the mother of Jesus, the Son of God. In Matthew, of course, this trajectory is explicitly named as earthward when it is proclaimed that one of the titles by which Jesus is to be known is 'Emmanuel' which, in Hebrew, means 'God with us'. As the Gospel narratives unfold through to the crucifixion and resurrection we find a growing sense that the community which arose and flourished afterwards, to use St Paul's wonderful phrase, now understands itself as 'the body of Christ' - i.e. humans were now, themselves, sons and daughters of God (Romans 7:4, I Corinthians 10:16 and 12:27, Ephesians 4:12). In this embodied idea the beach-head into this world was affected and, in the two great commandments so stressed by Jesus, namely to love God and neighbour, the community begins also to understand that we find God in our neighbour - in the other who is different from us. As our secular culture has grown and added to its world-view powerful scientific paradigms, the world has increasingly begun to show up to us in a way which means we can no longer separate anything out of the whole. Everything is our neighbour, our brother and sister.

In consequence, we may say that this Christian trajectory, is the process by which our secular North Atlantic cultures have come both to feel and try to live the possibility that YES!, somehow, everything can be understood as holy - things, animals, plants and people. This liberating insight lies, of course, at the heart of what a church such as this considers to be its Gospel.

But this wonderful Gospel, which expands the conception of the holy to the whole world, is one that we know easily turns into something very different indeed. And we are all familiar with the problematic and destructive dynamic which means that whenever the value and worth of everything becomes simply the same as everything else we discover that it is increasingly difficult to decide what is of particular relevance to us in the world. It is all too easy to find that it no longer matters to us whether we choose this thing or that thing because, well, in terms of worth and meaning, they are simply the same. We can quickly begin to inhabit a world in which nothing in particular (no thing nor any way of life) shines out and shows up to us as particularly worthwhile and worth living for.

So how can we, as a liberal religious community, both keep alive the Gospel that everything is holy without at the same time loosing a sense of what particularly counts for us as life and meaning-givingly holy?

As a minister one thing is clear, namely, that it is wholly insufficient merely to proclaim either to ourselves or to the wider world that "everything is holy now" without, at the same time, living ourselves and offering to others a coherent religious practice that allows such an insight to be shown by us in our words and deeds and, therefore, passed on to those who chose to follow us.

As a jazz musician it seems to me that here we find very little - perhaps no - difference to my need to show my jazz students that there are no wrong notes by insisting they practice arpeggios, scales and phrases in which some notes show up as right and others as wrong. This practice is, of course, the key thing.

By the same token if you truly desire the freedom that the trajectory of the Gospel promises (at least the Gospel as I have outlined it here) namely, that everything is holy, then it seems to me that one has no choice but to commit to practising something specific (analogous to arpeggios, scales and phrases) in which some things will shine as being more holy than others which, in a church standing in the liberal Christian tradition such as this, is to engage in certain practices like an ongoing prayerful meditation upon the Biblical narratives and their relationship to our contemporary world, taking part in church services such as this one, the evening meditation service or our occasional communion services (the next of which is on Christmas Eve) or in our ongoing series of Wednesday evening conversations.

With this point in mind I can conclude by turning directly to Peter Mayer's song 'Holy Now' which we heard earlier.

It seems to me that the particular brilliance of Mayer's lyric is found in that it shows this freeing process at work. Everything is, as he says, holy now, but notice how he shows what this means by keying 'everything' to the fact that certain particular things have shown up for us in the context of our meaning giving Christian narrative as being especially holy, in the case of this song bread, wine and water. The song encapsulates the matter in the lines found in the final verse when he sees

. . . a little red-winged bird
Shining like a burning bush
Singing like a scripture verse
It made me want to bow my head

The little red-winged bird (a symbol of 'everything') is now recognisable and expressible as holy only because it is possible to say that it shines LIKE a burning bush, or that it sings LIKE a scripture verse.

The burning bush and the scripture verse when they are rooted in a lived religious context are precisely the kinds of things that help us see in what consists the holiness of this little bird and, by extension, all the other things in the world. It's the same process that, in jazz, allows an experienced player, to reveal in what consists the rightness of wrong notes.

But when we play jazz, we don't play all the notes all the time and we do not live in a blissed out world of total right-note-ness but in a world which allows first this note, now this one to show up and shine as the right one, here and now. How notes are right in the jazz waltz we'll play in a moment is different from the way the notes will show up as right in the ballad we'll play at the end.

Likewise, when we are living fully a religious life we don't live in a blissed out world of total everything-is-holy-now but in a world which allows first this bird, now this flower to show up and shine as the right one, here and now.

In both cases, in music and religion, this possibility for every note being the right one or everything being holy is keyed to a practice in which certain things show up as especially right and holy.

When we practise our practices like this the miracle is that we find we are no longer living in a world half-there, a world that's merely Heaven's second rate hand me down, but right in the heart of the kingdom of Heaven, right here right now.

Keeping as especially holy, Sundays and other days and times when we celebrate events such as Mary's Annunciation and the birth of her child, Emmanuel, God with us, are precisely the keys which gives our North Atlantic culture access this kingdom and its liberating law of love which enables the possibility that, in its own (right) time and place, everything in this miracle of a world can come to shine for us as holy.
Email Post
Labels: Advent Annunciation Emmanuel Everything is holy now Gianni Vattimo Jazz Jesus liberal Christianity Luke Peter Mayer Peter Shepherd Verwindung wrong notes
Andrew James Brown
My name is Andrew James Brown. I’m a philosophically/theologically inclined writer with sympathies towards Shin’ichirō Imaoka’s understanding of free religion (自由宗教), Christian atheism, D. G. Leahy’s “thinking now occurring for the first time”, a Lucretian inspired religious naturalism, new materialism and Kyoto School philosophy; also a photographer, cyclist, walker and jazz bass player. In addition to this, I’m the minister of a small, liberal, free religious community in Cambridge (UK)

Yewtree said…
I like this very much. The illunmination of this bird or that bush as being holy now is like the selective illumination of the Christ child in the painting, shining on Mary's face.

A propos of being specific and not vague and woolly (a cause which I know is dear to your heart), you might enjoy this blogpost by Peter Boullata: The Liberal Church Finding Its Mission: It’s Not About You.

I'm also writing a blogpost on why one needs to articulate one's theology (albeit in a provisional way which is always open to new understandings and experiences) which I'll share in another comment.

Yewtree said…
Here's my first attempt at engaging with this - I think it is something I will come back to, as I don't feel I captured everything I have to say on this topic...
29 December 2011 at 12:21