'Look, that is what I mean by God' - A Christmas Day meditation 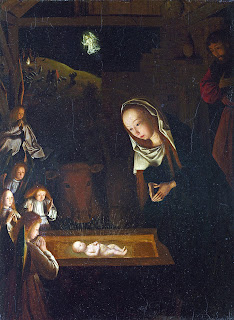 In the year I graduated (2000) from theological college and became a minister in Cambridge, the National Gallery in London held an exhibition curated by Neil MacGregor called 'Seeing Salvation' illustrating the ways Jesus has been represented in western art. I saw there many wondrous things but the work to which I have returned again and again in the intervening twelve years is "The Nativity at Night" an Early Netherlandish painting of about 1490 by Geertgen tot Sint Jans. It is believed that it was painted for private devotional use and that the empty space by the crib-side in the central foreground is there so you can yourself join the holy family, assorted angels and ox and donkey in pondering the Christ-child.

(You can view a high-quality photo of this painting and zoom in to see detail at the National Gallery's excellent website. Just click on this hyper-link)

Everytime I have sat in that empty space in front of the actual painting or, of course, more often in front of the reproduction I have of it, I am aware that Geertgen is saying to me, 'Look, that is what I mean by God.'

But for someone like me who has grown to maturity in a secular, religiously skeptical and hyper-rationalist culture I've often recognised that I've never been entirely sure what to do with or make of this claim. Given my Christian upbringing I've always been hugely sympathetic and drawn towards an engagement with this claim but it's always been hard. In fact I would say it's been the hardest project I've ever undertaken. But, just as I intuitively felt it was worth persevering against all the difficulties and odds to learn how to become a jazz musician some similar feeling has continued to allow me to trust Jesus' promise that if I ask well it shall be given to me; that if I continue to seek I will find; that if I continue to knock the door will be opened unto me (Matthew 7:7-8).

However, for all this, a couple of years ago I had to admit that, for the most part, I didn't feel I'd ever really got close to what Geertgen (and, of course, the Christian tradition as a whole) was and is pointing at. Yes, there is always a child to be found in the crib, you can see him there in the picture and hear about him in the gospels just as I can, but somehow I felt that, in the deep way I sense Geertgen painted his picture and thus made his claim, in truth I have always found the crib empty. I remember well the poignant and actually quite painful moment when I understood myself as the protagonist in R. S. Thomas' poem "Lost Christmas":

He is alone, it is Christmas.
Up the hill go three trees, the three kings.
There is a star also
Over the dark manger. But where is the Child?


Pity him. He has come far
Like the trees, matching their patience
With his. But the mind was before
Him on the long road. The manger is empty.

Someone from my cultural background seems, perhaps, doomed to repeat this journey up the long road to an empty crib because I really don't want to let go of my mind, not least of all because I've been taught that through its actions I will find an (perhaps the) assured way by which I will gain knowledge of all that is good, true and beautiful.

I will not, need not, go into the details but over the two years a sustained reflection upon both what it is to be a jazz musician and always already to be experiencing the world as a kind of skeptical Christian have disclosed to me that it is simply not true that the mind alone need ever go before me in my attempts better to encounter the world. (In fact it's rarely the case that one ever does this but one certainly thinks so!)

I realise that it is possible to proceed to the crib with my looking going before me allow my thinking, my mind, to stand a little behind - and a little more relaxed and chilled. (I have in view here something like the activity pointed to in §66 of Wittgenstein's 'Philosophical Investigations' where he says 'don't think, but look!') The result is that I feel tantalisingly close (in the way one can sense warmth from an, as yet unseen, source of heat) to what it is that old Geertgen was pointing at when he made his painting for me to sit in front of - that source of hope (warmth) that is signified by the shining Christ-child.

I feel I can best help you see what I have seen, or at least glimpsed (sensed), by reminding you of a vital distinction our culture nearly always blurs - that there is a world of difference between being and beings. One very simple way of seeing the difference between them is to consider a genus and we'll start with beings.

A genus is, of course, a class, kind, or group marked by common characteristics or by one common characteristic. So we can explain, with real clarity and definiteness, the genus animal by pointing to, say, that ox and that donkey in the painting. Once I've done this for someone they'll be able to go out into the world and recognise all oxes and donkeys whenever they see them, even when there are quite marked differences in, say, colour and size.

That this is so obviously a helpful way to think in many situations means that it is incredibly tempting to think that when Geertgen points to the Christ-child and says 'Look, that is what I mean by God' he is doing something similar - i.e., he is making some claim that God is like this little being only writ unimaginably large. And here we have before us mapped out a route (the long uphill road) to the pervasive idea that God is a necessary, omniscient, omnipotent, omnipresent, eternal, immutable, self-existent, self-sufficient and infinite being, nothing less than the highest genus of which we are but a very dim shadow. It's certainly how we have come to understand the words of the writer of Genesis that we are created in the image of God (Gen. 1:27).

However, for all kinds of reasons, some of which I have explored with you in other addresses, this philosophical understanding of God which for centuries has underpinned our whole culture (and which includes most forms of Christianity) has become implausible. In short this God of the philosophers - in which our mind most assuredly goes before us - is dead. If Geertgen is pointing to such an ultimate being when he says "Look, that is what I mean by God" then it is no wonder that year after year people like me find the crib empty.

Think back to my illustration of the ox and the donkey - I point to them and the genus is revealed to you clearly and definitely. Leaving this building - should you have come in not knowing anything about oxes and donkeys - you'll be able to go out and easily recognise individual examples of the genus when and wherever you encounter them.

However, As Magda King notes, to explain the concept of *being* we would in vain point to an ox or donkey and say "Look, that is what I mean by *is*" (in King's illustration she uses the examples of a horse and the sun but it's true, of course, about any being or entity to which we can point). This simple but striking example reveals how very mysterious to us is the most basic thing in our world - that things are, that there is anything at all.

So my question this Christmas Day is what happens if you sit in front of this painting and imagine that Geertgen is trying to get us to notice the extraordinary mystery of being itself? The extraordinary possibility that underlies our whole world and which freely gifts us everything - which allows anything to show up to us in the world and to shine for us with meaning and worth - just as in Geertgen's painting the Christ-child shines and lights up a whole new world of possibilities. The new world of possibilities which Geertgen sees lit up by the Christ-child is, amongst other things, a world in which there is disclosed a new style of being, a new way of being-in-the-world which can now speak and act out of an understanding of God/the divine as something self-emptying, self-giving, prepared to make itself known not as the gods of old obsessed with power, dominion and violence over all but as a creative, unfolding event; the lived, vulnerable  life of loving service in which are blessed the poor, those who mourn, the meek, those who thirst after righteousness, the merciful, the pure in heart, the peacemakers and those persecuted for righteousness' sake (Matthew 5:1-12).

There is so much more I would like to say about this, so much more I feel that needs to be said, but it's simply beyond my ability at this moment in time and always will be because it's about living abundantly and authentically the life you are gifted with in the most compassionate and charitable (i.e. caritas - love) way possible. It's about a life in which we never ARE (a being) but are always BECOMING (an ongoing event).

In the end all I think we should do this happy and joyous morn is to see this new style of being continuing to appear in our world and then, like Mary, keep all those things and ponder them in our hearts (Luke 2:19) so we might see what shows up in its light, in the shining light of this child - a light Geertgen so magnificently and movingly depicts.

But what I can say this morning, and with it I'll conclude, is that for me I sense that the crib is longer empty and I am called to point at the Christ-child and say 'Look, that is what I mean by God.'

The piece of music I played immediately after giving this address was by the pianist Nils Frahm called "Less" from his wonderful new album "Felt". It seemed an appropriate piece to ponder the Christ-child in Geertgen's painting. You'll have to play it through decent speakers as there are some wonderful (necessary) low frequencies.


A postscript. My friend and colleague Jochen Dallas (a Lutheran pastor) sent me a card in which he included some words from one of Dietrich Bonhoeffer's meditations on Christmas that seem worth adding here:

We are talking about the birth of a child, not the revolutionary act of a strong man, not the breathtaking discovery of a sage, not the pious act of a saint. It really goes above all understanding: What kings and statesmen, philosophers and artists, founders of religions and moral teachers vainly strive for, now comes about through a new born child.

Yewtree said…
I always like those descriptions of Christmas that point to the paradox of the infinitude of God contained in a baby in a stable. It's the best bit about the whole mythos. Also, that theosis comes through kenosis.
29 December 2011 at 11:11

Jessica said…
Thanks for another thought-provoking meditation, Andrew - and Merry Christmas and Happy New Year to all at the UC.
Jess
1 January 2012 at 08:31