An unexpected post concerning another way of thinking about Universal Salvation . . . 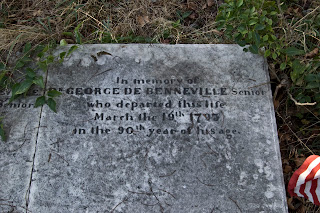 A good friend of mine - RyS - posted some good and helpful questions (his always are) in connection with my last post. I tried to put my reply there but Blogger tells me my reply has too many characters in it. Me go on too long? . . . Never . . .

Anyway, as I wrote this reply this morning I realised RyS' words pushed me to talk about Universal Salvation - not something I've done in a long, long time. The photo at the head of this post is of the grave slab of my own great Universalist hero - George de Benneville (1703-1793). A couple of years ago I posted a link to a pdf scan of the only biography that was written about him - you can download that here. My own way of getting there is very different to his but the 'final' hope is the same - that no life is ever lost or wasted.

So to your comments in turn (RyS's points are in italics):

The reference to the 'two paths' seems a bit stark - one liberal, one conservative.

Indeed - but then I point out this fact when I say there is here much blurring and grey. One of the things that is difficult about writing short addresses is how to highlight important matters so they can be seen very quickly. I hope that the conversations after the sermon and here, such as yours, can then nuance them appropriately. So thanks for the chance.

(Addendum: Don't forget the two path image appears in the Christian tradition very early - see the opening of the Didache.)

It then transforms into a critique of liberalism as infinitely too many paths, and conservatism as simply right path/wrong path.

An important point to put in at this point is that in this address I was trying to talking about individual approaches/attitudes NOT actual religious traditions/denominations etc. I think one might be able to say something along these lines about them but it's not what I tried to do here - though I did not, I think, make that clear enough and you are right to raise this point. However, I hold fast to my general point really because of my pastoral experience. I regularly come face to face in my study with two general types of people: on the one hand, those who are convinced that there is a right path and many wrong ones and, on the other, those who - even if they believe they have started down one path - are crippled by anxiety about the multitude of possible paths they have encountered and not taken and those they believe they will encounter. In the latter case it really does often mean that the person before me isn't able to live their life in a deep and abundant way they (and I) feel is possible. (I know this latter tendency only too well being as I'm a liberal myself).

You then tell us there's just the one path, and that we cannot change the world, merely how we perceive the world.

I do indeed say this - I think that for an individual there is just the path that is your life - to go back to Beech's parable, when you are dead and gone your life (as with the pot at it's completion) will have been just that life and not another.

But my point is that this life (like every great text) is always capable of being interpreted in ways that can show up new meanings and possibilities. The Christian example par-excellence is how the utter disaster of Jesus ministry - death on a cross with all his followers running away scared beyond measure - is somehow transformed such that it lights up a whole new possible way of being in the world for those who eventually regrouped and began to live in what we call today Christian community. In a very real sense the world hasn't been changed by that - Jesus was still killed - but what that *means* has changed and it is this aspect change which allowed them, and then those of us who live in the light of that event, to live in a world where things now show up differently before us. This is why I think one should never say 'merely' with regard to how we perceive the world. Everything hinges on this - this is what makes all the difference. When you perceive the world differently then you will be in it (and acting) differently.

This goes against the reality of the world pushing back, and us reacting (not reactionary) in it. Surely such 'pushing back' is prompting us to interact with the world, and therefore exercise our gifts in order it to change it? And in the process of meeting the demands of this reaction, altering our path in ways which we would not have known we would have chosen? Thus we find us and the world changed by our response to a need that pushes uniquely against us. This affects other people's choices as well. So - is this not a concept of God?

It seems to me that here I am talking about the world pushing back at us and it is this pushing that causes us to question how we perceive it and then, with this change of perception, we are freed to exercise not simply our gifts (those we have or believe we have) but sometimes actually to have disclosed the possibility for new ways of acting that were never possible for us before hand (we are gifted new gifts).

Here I come back to the thought I've particularly been talking about over the last month which is that God might best be thought of (perceived) as self-giving unfolding event and that we form part of that unfolding (consciously or unconsciously) - there's your interacting aspect. This is, indeed, a concept of God for me but it is one which allows countless narrative lines (i.e. our individual lives and, therefore, our story) to wander through it. The trick is to find ways such that the only one of those paths that we walk (our life and not another's) is walked in such a fashion that we can begin to see how meaning-ful it is - in fact how meaning-ful is every life.

This doesn't mean, of course, that every life is (or can be perceived to be) in it's actual living, lovely, wonderful and without pain and grief (twelve years in the ministry reveal this to me only too well) but it is to keep the door open for, well, let's call it what it is: Universal Salvation - how every life can, somehow, be seen as forming part of a greater, meaning-ful story even as this greater story is always too great to be known by any one of us (this is not to resurrect a old style grand-narrative because what I'm talking about is radically open-ended, open to new interpretations and possibilities and, by definition, is something that cannot be known by us, nor even God). This is one of the reasons I so admire Norman Maclean's story "Young Men and Fire" where he does just this for the twelve Mann Gulch Smokejumpers who died in 1949. It seems to me to be  a theological gesture towards the kind of theological narrative of salvation a God who is unfolding, self-giving event might 'write' (be always writing) - if such a thing were possible (which it isn't). It would be an open-ended version of the book (text) of life - itself capable of, as I quote Thompson in my address, continually generating new readings, even revolutionary re-readings which radically reorient the sense of the work (which we might call 'creation' - or God).

But none of these words, of course, makes this sermon right and your comments have helped me clarify something important about what I was trying to say. If what I've said just strikes you as plain nonsense of just missing your points then fire a message back.

It seems appropriate, even required as a necessity requires to conclude with some words of Benneville's that have long inspired me (they appear on the opening page of the prayer book I wrote) and sum up the call that lies behind my words above.

Preach the Universal and Everlasting Gospel of Boundless, Universal Love for the entire human race, without exception, and for each one in particular. . . . Proclaim and publish to the people of the world a Universal Gospel that shall restore, in time, all the human species without exception. . . . The Inner Spirit makes men feel that behind every appearance of diversity there is an interdependent unity of all things.

My thanks and warmest wishes to you as always for your gentle and always helpful pushing-back.

Yewtree said…
I love this bit:

"God might best be thought of (perceived) as self-giving unfolding event and that we form part of that unfolding (consciously or unconsciously) - there's your interacting aspect. This is, indeed, a concept of God for me but it is one which allows countless narrative lines (i.e. our individual lives and, therefore, our story) to wander through it. The trick is to find ways such that the only one of those paths that we walk (our life and not another's) is walked in such a fashion that we can begin to see how meaning-ful it is - in fact how meaning-ful is every life."