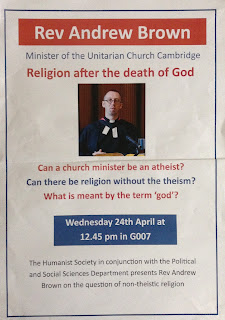 What follows is the text I used to introduce a very lively student lunchtime discussion held today at Hills Road Sixth Form College in Cambridge, UK. My thanks to them for inviting me to talk. I enjoyed trying to answer the many very well put questions that the students asked.

Religion after the death of God

In order to make sure our conversation together begins in the right place I need to begin by telling you a very short and simplified version of a complex story that lies at the heart of our culture. I will read from this text just to keep this bit short and tight. Once I’ve done I hand over to you – and please ask me what you like. All I will say here is that my answers to you will be made, not to persuade you I’m right but, instead, simply to introduce you to an important, if not very well known, strand of contemporary theology.

Once upon a time God was the kind of God spoken about in the stories we find in the Torah, the first five books of Moses. There God is often presented as if he (and it is a he) were a literal being. The Old Testament - the Jewish Scriptures - is a remarkable collection of books that, as a whole, is always undercutting this picture but, nevertheless, it retains in many of its stories this early conception of a god who is a being somewhat like us but, of course, infinitely more powerful.

But our Western European culture did not inherit its conception of God solely or even directly from early forms of what became Judaism but, instead, through its complex intermingling with Greek culture. As it sometimes put, our own culture is a veritable mix of Athens and Jerusalem.

Turning then, for a moment to Greece we can see that at least from Plato (424/423 BC–348/347BC) onwards philosophers have proposed various ideas of a transcendent supreme being who was the ground of existence and intelligibility of the world. In the works of St. Augustine (354–430) this Greek metaphysical conception of god became identified with the creator God of the Judeo-Christian tradition.

This ensured that we inherited, not a conception of a literal providential being called God, but rather a Christianised version of the Platonic idea in which ultimate reality is that of the ideal Forms. God was the Good, the True, the Beautiful, the world’s ultimate ground, structure, purpose and meaning.

Various versions of this picture held the centre stage in our culture right through medieval times and on into the Reformation. But no culture stays still and ours moved inexorably on thanks to both the rise of the natural sciences and the sceptical thought of people like René Descartes (1596-1650). Descartes began to wonder how we could ever come to have secure knowledge that a transcendent God and the ideal Forms were, in fact, the basis for, or ground of, reality? After much worry and thought he came to the opinion that the only thing we could know for sure was, not God, not the ideal Forms but only ourselves as ‘thinking things’ (res cogitans). From out of this insight came his most famous words “Cogito ergo sum” (I think, therefore I am - Part IV of Discourse on the Method 1637 and §7 of part I of Principles of Philosophy 1644).

In his work we see our culture begin to develop the feeling that God and the Forms were “known” to us only as representations upon our own ego-consciousness. To help grasp this idea, think of a seal and sealing wax. Descartes is saying we only know the seal (God) is real because of the impression it makes upon us (the wax). However, although we have this impression of God we still can’t produce the seal itself (God) in a way that we can grab hold of the little metal seal that sat upon Descartes’ desk. God was not like that little seal at all. So, if all we could only know for sure “Cogito ergo sum” and, therefore only our own representations of reality, how could we know for sure that they were true representations of reality?

As a culture we were beginning to discover, rather disturbingly, that the once secure ground of God and the Forms was rapidly disappearing from under our feet.

Enter Friedrich Nietzsche (1844-1900), who came to the conclusion that our own views of the world as an individual ‘thinking thing’ were not some accurate, ultimately trustworthy mirror-image impressions of reality itself but were, instead, simply a creation of our own will (to power).

What this meant was that we were left not with ‘indubitably true beliefs’ but simply values. It is this recognition that allowed Nietzsche famously and notoriously to proclaim “God is dead.” In his book “The Gay Science” (1882/1887) he says:

God is dead. God remains dead. And we have killed him. Yet his shadow still looms. How shall we comfort ourselves, the murderers of all murderers? What was holiest and mightiest of all that the world has yet owned has bled to death under our knives: who will wipe this blood off us? What water is there for us to clean ourselves? What festivals of atonement, what sacred games shall we have to invent? Is not the greatness of this deed too great for us? Must we ourselves not become gods simply to appear worthy of it? (Nietzsche, The Gay Science, Section 125, tr. Walter Kaufmann).

Lastly, for our purposes today, there comes on to the scene Martin Heidegger (1889–1976). The important thing to know about him in this context is that he was the first philosopher to notice what he called the ontological difference - that there is a difference between Being and beings. He pointed out that although, on the one hand, we (seem to) know a lot about beings (and up until this point in our history remember God had been one - the supreme being), on the other hand, we know very little about Being.

One very simple way of seeing the difference between beings and Being is to consider a genus. A genus is, of course, a class, kind, or group marked by common characteristics or by one common characteristic. So we can explain, with real clarity and definiteness, the genus animal by pointing to, say, an ox or a donkey. Once I’ve done this for someone they’ll be able to go out into the world and recognise all beings that are oxes and donkeys whenever they see them, even when there are quite marked differences in, say, colour and size.

However, to explain the concept of Being it doesn’t help much to point to an ox or donkey and say “Look, that is what I mean by is (to be)”. This simple but striking example reveals actually how very mysterious to us is the most basic thing in our world - that things are, that there is anything at all. (This example is Magda King's and can be found in her "A Guide to Heidegger's Being and Time".)

Now the theological position I inhabit takes Nietzsche and Heidegger’s insights very seriously and a whole tradition of thinking has developed from it (see select bibliography below). It thinks our old idea of God is, indeed, dead and that, when we start thinking about what we might mean today when we use the word God or wish to talk about the divine and the holy and the sacred, we need to stop thinking about a being, a supreme being, and start to think about Being which mysteriously allows all things to be - you, me, donkeys, oxes, schools, desks, everything.

So, to draw to a close: To be a theist is to believe a supreme being exists. To be an a-theist is not to be of the opinion that such a being does not exists. I don’t believe such a being exists and this makes me an atheist. However, the story I have just told is one that has been played out through the centuries within a culture primarily (but not exclusively) shaped by the Christian story. I am wholly a product of this culture and this makes me a kind of Christian. But the two together makes me, not just any kind of atheist nor just any kind of Christian but, quite simply, a Christian atheist. I find, as the contemporary philosopher Mark Wrathall’s says, that:

. . . the loss of belief in a metaphysical god that is the ground of all existence and intelligibility, and even the loss of belief in a creator God who produced the heaven and the earth is not a disaster. [In fact the] absence of foundational God [can] open up access to richer and more relevant ways for us to understand creation and for us to encounter the divine and the sacred. Thus, the death of the philosopher's God may have provided us with new and more authentic possibilities for understanding religion that we blocked by traditional metaphysical theology (or onto-theology).

Right, that’s my introduction done and so now, as exam papers love to say: “Discuss.”

Ernst Bloch: Atheism in Christianity: the religion of the Exodus and the Kingdom (Verso Press, 2009)

John D. Caputo: The Weakness of God - A Theology of the Event (Indiana University Press, 2006)

James C. Edwards: The Plain Sense of Things - The Fate of Religion in an Age of Normal Nihilism (Pennsylvania State University Press, 1997).

Klaas Hendrikse, Dutch Protestant minister, who holds a similar position to my own:
http://www.bbc.co.uk/news/world-europe-14417362

Richard Holloway: Doubts and Loves: What is left of Christianity (Canongate Books 2003)

Richard Holloway: Looking into the Distance: The Human Search for Meaning (Canongate Books 2003)

Gabriel Vahanian: The Death of God: The Culture of Our Post-Christian Era (New York, George Braziller, 1961)