I often get told off (rightly I think!) for not letting folk know when I'm playing next - especially when it is in Cambridge, so here's the press release for the next gig . . . 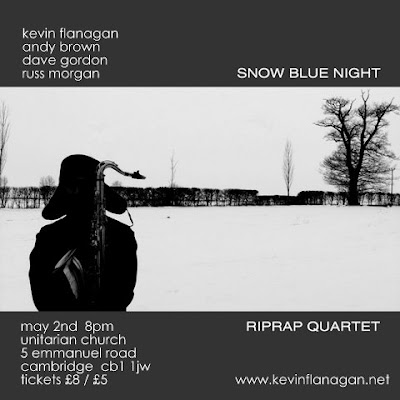 
Riprap formed eight years ago as a group of like-minded musicians who wanted to explore some less common modes of composing and open-ended improvisation, sometimes working with spoken word in the form of readings with contemporary poets, encompassing the freedom that typified the early period of the original Beats. They take their inspiration from the Beat Poets, with their freewheeling lateral association, Miles Davis and his open-ended forms (which always had a solid street-informed rhythmic drive), and Kerouac’s idea of a ‘Holy Goof’ (spiritual trickster). This has now coalesced into a core quartet: Kevin Flanagan (saxophones), Dave Gordon (piano), Andrew Brown (bass) and Russ Morgan (drums/percussion).

Snow Blue Night explores a number of cross-fusions informed by an admittedly catholic range of tastes. Although purely instrumental on this recording, some of the compositions were originally conceived as commissions to accompany readings by poets such as Ruth Padel, Malcolm Guite, Grevel Lindop and the American alternative poets Gerry Nicosia and Chuck Perkins, whose range of styles demanded a look outside the usual jazz canon. This led to an exploration of sources such as Japanese Gagaku, Rameau, folk tunes and works by the composer Ruth Crawford Seeger, to name but a few. The resulting music ranges from burning neo-groove jams and blues to haunting and atmospheric ‘free’ jazz that makes sense, where the musicians solo beautifully and sit in grooves like they’ve found a new place to live.

The group have performed in venues such as the Royal Festival Hall, West Road Concert Hall, Cambridge University, Essex University, Anglia Ruskin University, Chelmsford Civic Theatre, Boxford Jazz Club, Brighton Jazz Club and Peterborough Jazz Club and festivals such as the TS Eliot Festival and John Clare Festival. Their music has been played on the BBC World Service and PBS in the USA. The quartet’s last CD Riprap, explored a series of settings inspired by the work of the Pulitzer Prize-winning Beat poet Gary Snyder.

Kevin Flanagan (soprano and tenor saxophones) comes from Lowell, Mass. USA. After dropping out of high school, he co-founded the group Antares, an improv and jazz-based cooperative which toured New England and the UK in the mid-70's to early 80's. During this period he was also involved in blues and popular music, both performing and recording. He settled in the UK in the mid-80's and worked on the London jazz and pop scene, playing and recording with Ben E. King, B.B.King, Paul Weller, and members of Pink Floyd, Led Zeppelin, The Sex Pistols and Portishead, as well as various West African High Life and salsa groups. He gradually became primarily involved in jazz, playing with his own group and the Tommy Chase Quartet at festivals in the UK such as Glastonbury, Brecon, Edinburgh, Glasgow, and Brighton and festivals in Europe in Milan, Paris, Poland, Portugal, Sweden and the North Sea Jazz Festival.  He spent much of the 90's collaborating with Chris Ingham in FIQ, releasing two highly acclaimed CD's, Zanzibar and Textile Lunch. A graduate of Goldsmiths University, with a post graduate degree in composition from ARU (where he lectures), he later studied composition at the University of Sussex with Martin Butler, and has had works commissioned and performed by orchestras in London and Cambridge.

Dave Gordon (piano) plays both with Riprap and with his own trio, and for him jazz and Baroque music have remained equally irresistible forces. He has played with the Theo Travis Band and the Pete Oxley Band, having performing at Ronnie Scott's and at numerous international jazz festivals, and has released a number of CD's. Dave also works as a solo improviser with the London Contemporary Dance School, as a harpsichordist with the Academy of Ancient Music and other Baroque orchestras and in New Zealand and Australia as a recitalist. As a composer, he writes not only for his trio, but also for BBC Radio 3, and has recorded CD's with his crossover band Respectable Groove and the band Zum. He recently won an AMI award for composing a community opera. Dave is currently also working with Chris Garrick and the singer Jacqui Dankworth." a richly gifted player, with a sparkling style and boundless imagination, able to move from one mode to another with great skill" - Phil Johnson (The Independent).

Andrew Brown (acoustic/electric bass) studied with Tony Hougham (Principle Double Bass of Covent Garden) and went on to play with such American players as Tal Farlow and Peter Erskine, as well as in bands with Pete King, Benny Green, Pete Oxley, Simon Vincent and FIQ with Kevin Flanagan, and Chris Ingham. He is also involved with the contemporary music scene, working with such players as Eddie Prevost and Lol Coxhill and, most recently, in free improvised/electronic trios with the Canadian composer Matt Rogalsky and American reed player Scott Rosenberg. He has worked as a session player in a number of rock bands including a period in Paris with Elise Romane and two years with Steve Harley. He is currently working with Kevin Flanagan’s Riprap Quartet, and Respectable Groove.

Russ Morgan (drums/percussion) studied at the Guildhall School of Music before his "perfect time keeping” and his “ability to tell a story" (so described by Paul Wertico) took him out of school into a varied career. He has worked extensively on the British scene as an accompanist in numerous live gigs and on recordings, and worked and recorded in groups with Simon Vincent, Pete Oxley, Laura Zakian, Kevin Flanagan, Chris Ingham, Tim Whitehead, and Dave Gordon.  Russ is also an accomplished teacher of Tai Chi and a trained Accupuncturist.