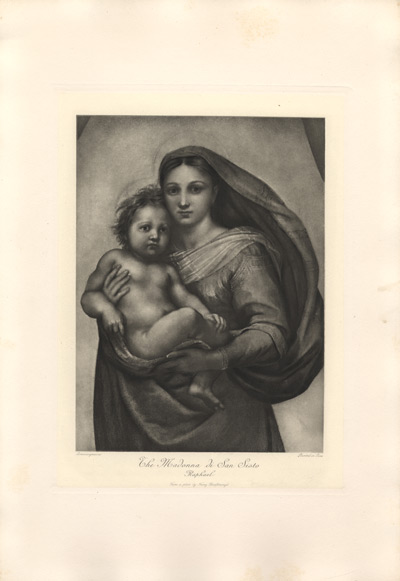 Today is "Mothering Sunday", the traditional day upon which to visit, or send gifts to, our mother church wherever and whatever we thought it was. This earthly mother church was believed to be a symbol of, or even portal through which we could glimpse in the here and now, the heavenly Jerusalem above. As you heard in our reading (Galatians 4:21-31), Paul thought this free city was symbolised by Sarah - and she, he thought, was our mother. This idea of a heavenly mother later came to rest more securely for our culture in the image of the Madonna which has become beloved of and adopted as a symbol by both Christians and Humanists alike. I have prominently included the image of Raphael's Madonna di San Sisto (1512) in this post (and on the order of service) not only because of its obvious religious resonances but also because it was a key icon in Auguste Comte's non-theistic "Religion of Humanity". Given this, Raphael's image of the mother still seems to me to offer our present day culture, with its current, unhelpful theist/atheist, religious/secular splits, a powerful, potentially unifying symbol.

St Paul's words gesture, of course, towards the common and completely understandable hope that most of us will have felt at some point in our lives, namely, that behind our transient world - a world in which all actual mothers and all actual individual instances of mothering die - there lies a permanent, foundational true mother and mothering to which we can turn in our moments of greatest need and to which, at the end of our earthly lives, we will return.

But, as we are all acutely aware, though this thought remains a highly attractive one it doesn't have the real "inevitableness" (i.e. it just seems true) that it did for St Paul and his culture. Very few of us today can believe that when we die we will later find ourselves waking up in this heavenly city of Jerusalem - that is to say, waking up safely back home in the womb of our true mother. For we secular moderns the image of the "true mother" is today simply a powerful ideal that can inspire us both either to make of ourselves better actual mothers and to display better mothering to the world, and also to give proper thanks to our own human mothers for all they have done for us. It is at this point, of course, that we see how the theological celebration of "Mothering Sunday" has elided seamlessly into the humanist celebration of "Mother's Day".

In nearly every way I wholly support this humanist move towards the celebration of our earthly mothers - after all you'd have to be a real curmudgeon to think that celebrating and thanking them is something that shouldn't be encouraged. However, for all that, I find I'm reluctant entirely to let go something captured by the more theological celebration of "Mothering Sunday". I find myself agreeing with the Unitarian minister, economist, Dante scholar and fellow traveller of Comte's "Religion of Humanity", Philip Henry Wicksteed (1844-1927) who once said that, although he was "not sure whether the religion of the future will be strongly Theistic" he did feel that "it will have to embrace things that only Theism has hitherto reached" (quoted in "Philip Henry Wicksteed" by C. H. Herford, Dent & Sons, London, 1931, p. xx).

Well, thanks to certain forms of twentieth-century continental philosophy we, with our own scientific, skeptical non-Theistic mindset can, I think, still have access to something analogous to the theological Mothering Sunday that we might be persuaded to embrace as "inevitable" (i.e. showing up to us as true).

What I find when I work through the idea of Mothering Sunday is something that helps restore to our often disenchanted secular world a sense of surpassing wonder and awe and immense gratitude so that I, personally, feel impelled to give thanks for being, for being here, and for being here together. Those of you who regularly come to this church will know that I have just quoted the grace we use at every one of our shared meals and that Susanna and I use every time we sit down to eat. In a way this address is an indication of why I think that prayer is so apt and important.

Now, the kind of continental philosophy I'm referring to (- it's basically Heideggerian) always encourages us to look to the phenomena and, one thing we can see and can be clear about is that, whatever else any human mother is, she is clearly the very doorway through which each of us has come into this extraordinary natural world. This undeniable natural phenomenon is explicitly referenced in the Catholic tradition which has sometimes called Mary the "Gate of Heaven" because it was through her that Jesus entered into this world - as with Jesus so, too, of course, with us.

But the temptation is to then go on to interpret this language in an old-school theological way and understand Mary to be a gateway standing between two real worlds - a supernatural world above and natural world below. We can't go with this particular interpretation of the gateway image because most of us can no longer believe in the existence of two worlds. For most of us there is but one world - this present, wholly natural one. But there is another way to interpret the gateway image. To get to that interpretation let's return to the phenomenon of human birth as revealed by the natural sciences - a view simply not accessible to St Paul in the first-century.

Today, we know that, after the initiating event of sexual intercourse with the father, a human mother begins to bring-forth her child - we might say a child "bud" begins to form in her womb and, by degrees, this bud begins to blossom into a foetus and thence, on the birth-day, into a child. Surely one of the wonders of the modern age is, thanks to ultrasound technology, the ability to see this "bud" and something of its extraordinary blossoming as the pregnancy unfolds.

Now, let's return to my use of the language of "bringing-forth". A mother brings-forth a child in her womb in a very, direct un-self conscious, natural, physical way and, after birth, she (and other people, including fathers) then consciously begin to mother the child so as to bring forth their fullest human potential.

The Greek word for "bringing-forth" is, as many of you know, "poeisis" and from it we derive the English words "poet" and "poetry". In an image highly appropriate to this season of spring, Julian Young notes,

"The model for poiesis is . . . the blossom rising forth out of its bud. The blossoming of (let us say) a rose is something that happens *within* nature" (Heidegger's Later Philosophy, Cambridge University Press, 2002, p. 41).

Now, let us replace the rose with the child. The child is the blossom rising forth out of its bud. The blossoming of the child is, like the rose, something that happens *within* nature.

However, as Young notes, the rose (or the child bud) is very different from the world-bud:

"Whereas the rose bud is visible and known, the 'world bud' is utterly mysterious, incomprehensible. And in the majesty of its overwhelming creative power, it is breathtakingly awesome" (ibid p. 41).

The key point really to get is that the "world-bud" - even though we can give it a name - remains utterly mysterious and incomprehensible both to science and religion. It is NOT, repeat, NOT possible to say anything about it but that it is the mysterious bud of our world, the bud of all buds. This "world-bud" is not within our world like a rose-bud or a child-bud but it is does seem to be capable of being called mother-like as the Tao Te Ching explicitly says:

"Nameless: the origin of heaven and earth.
Naming: the mother of ten thousand things."

Our human mothers are the origin of child-bud but the "mother" of all mothers, of all selves and all entities and things animate and inanimate - the ten-thousand things in the language of the Tao - is this wholly mysterious and incomprehensible "world-bud".

As the Tao Te Ching says, this is "deep – Deep and again deep: The gateway to all mystery."

In this address I am trying to reach for this mystery but without recourse to any kind of super-naturalism or theism and all I really want to do today is leave you with the suggestion that we can say, with a clean heart and full belief, that our true mother, the mother of all mothers is this utterly mysterious, no-thing, this world-bud that is not within the world but which is rather the 'upsurgent presencing' of all things. We are all children, blooms of the world-bud, this mysterious but natural mother that is analogous to St Paul's mother above.

My hope is that on this day as we remember our earthly mothers and celebrate Mother's Day we don't, at the same time, forget the utterly mysterious, incomprehensible mother of all mothers, Being itself, and to take time to celebrate her breathtakingly awesome creative power; it is this that I think we should celebrate on Mothering Sunday.

As (the Heidegger scholar) Richard Polt helpfully suggests, maybe the 'why' in the question is not a search for a cause but, instead, an act of celebration. Mothering Sunday is, I want to suggest, just such a celebration and it is why I feel compelled, particularly on this day, to say the prayer I said earlier: