"Where your treasure is, there will your heart be also" - a brief address before the church's Annual General Meeting 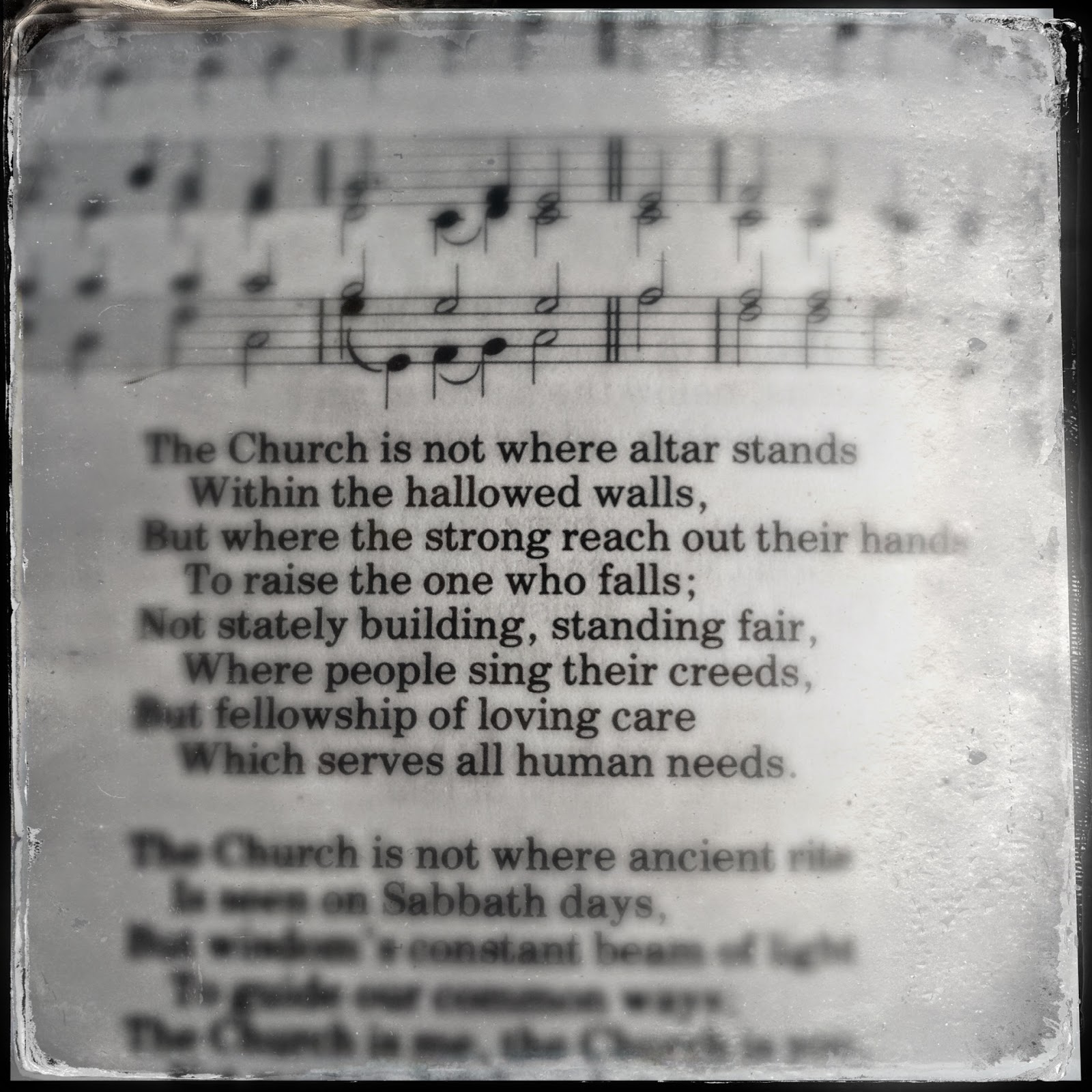 Today is our AGM, a time when, as a church, we review the past year and look forward to the coming one. It is worth remembering at this time that, as we sang earlier, "The Church is not where altar stands/Within the hallowed walls, But where the strong reach out their hands/To raise the one who falls" and, as we will sing at the end of this brief service, "A church is a place of human trust/More than of brick and stone"

In the beginning was the living, supportive fellowship, only later does this become translated into the bricks and mortar of an altar in a holy shrine.

The holy shrine can be a wonderful living thing, it can be a home, a true sanctuary, the holy elsewhere in the midst of a too busy and uncaring world, but this wonderful living quality only remains possible when the holy shrine is used and cared for by a living fellowship, one that lives in something like the living spirit and power that caused the building to be constructed in the first place.

But if and whenever that spirit and power begins to ebb the holy shrine quickly starts to die and become a dead shell because it no longer gathers in its precincts a real, intentional, inspirited and empowered community.

This happens whenever the central focus of the community moves from its living spirit and power and towards a inanimate building and a consequence of this is that, by degrees, the building begins increasingly to weigh down and concern the community. The building becomes for them an end in itself which stifles the possibility of free lives truly lived in spirit and in power. Lest people think I'm thinking only about religious life and not something everyday let's recall that Henry David Thoreau saw this process also clearly occurring amongst his farmer neighbours around Walden. The farmers he sees have forgotten the living spirit and power of farming and have become weighed down by the accoutrement of farming. As he writes:

"I see young men, my townsmen, whose misfortune it is to have inherited farms, houses, barns, cattle, and farming tools; for these are more easily acquired than got rid of. Better if they had been born in the open pasture and suckled by a wolf, that they might have seen with clearer eyes what field they were called to labor in" (Walden Ch. 1)

It is important to understand that Thoreau is not precisely insisting that everyone who has inherited farms, houses, barns, cattle, farming tools and, as far as we are concerned, churches, should simply to get rid of them - though at times this may be required. Instead, he is much more concerned to help those same people see with clearer eyes what field they were really called to labour in. In other words Thoreau desires that the farmer recovers the spirit, power and purpose of farming that caused his farm to be built in the first place and, for us here, to recover the spirit, power and purpose that caused this church to be built. As to what for us that spirit, power and purpose is I will return in the briefest of moments.

As Thoreau says, we "labor under a mistake" if we ever think that our true life as farmers or religious people is to be directed only towards the obvious, physical accoutrements in the world; after all, he observes, the material part of us "is soon plowed into the soil for compost." To drive this point home he silently cites Jesus by reminding his readers that in "an old book" it is said that it is a fool's life to lay up treasures which moth and rust will corrupt and thieves break through and steal (cf. Matthew 6:19-21)

Thoreau relies, of course, upon us knowing that this passage ends with Jesus saying "For where your treasure is, there will your heart be also" (Matthew 6:20). The implicit question he places before us is, "Where is your heart?"

This question brings me to our purpose today both in terms of our short AGM but also our communities overall purpose and mission.

In any AGM we will, naturally, spend some of our time talking about our material accoutrements on earth - our inherited buildings and finances - where moth and rust most certainly doth corrupt, and where there is always the danger that thieves will break through and steal. But recent events among us have restored my faith that, as a community, we are truly recovering a sense that our treasure does not lie in these things and so too, neither does our heart.

It is a recovery of the truth that our heart and our treasure lies in the extraordinary worth of a liberal religion that, in the spirit and power of its founder, the human teacher Jesus of Nazareth, remains committed to the exercise of "complete spiritual freedom."

That is to say our religious purpose is to encourage in ourselves and the wider society in which we live, a consuming passion for ongoing learning and a willingness to change in the light of that new knowledge, a radical openness to the lessons taught by the wholly natural yet still sacred world with all its lilies of the field and birds of the air, and also a profound belief that it is possible for humanity better to grow and flourish together in love and compassion.

When this treasure is acknowledged we know we can still truly sing with clean hearts and full belief (pathos) that this "church is a place of human trust/More than of brick and stone" and, as we will sing in a moment that, "the Church is not where altar stands/Within the hallowed walls, But where the strong reach out their hands/To raise the one who falls."
Email Post
Labels: AGM Cambridge Unitarian Church complete spiritual freedom Henry David Thoreau Jesus Memorial Church Unitarian and Free Christian Churches Walden Pond
Andrew James Brown
My name is Andrew James Brown. I’m a philosophically/theologically inclined writer with sympathies towards Shin’ichirō Imaoka’s understanding of free religion (自由宗教), Christian atheism, D. G. Leahy’s “thinking now occurring for the first time”, a Lucretian inspired religious naturalism, new materialism and Kyoto School philosophy; also a photographer, cyclist, walker and jazz bass player. In addition to this, I’m the minister of a small, liberal, free religious community in Cambridge (UK)

Unknown said…
Rev. Brown. I have no Church of my own here in the States, but I really love your post here on your blog. I stopped attending church a decade ago and became a rabid atheist who was forever haunted by the words of Jesus. As much as I tried to escape him and replace him. His words were always present. Since then I have become a student of the Tao Te Ching, the Gospel of Thomas, and a Humanistic follower of Jesus. I would like to say that your blog post have become a regular rounding out of my religious life. Thanks for touching my life so deeply with your words.

Thank-you for your very kind words and also for taking the time to post them here. It is much appreciated.