A second "Epicurean Gathering" and a little bit of it's history 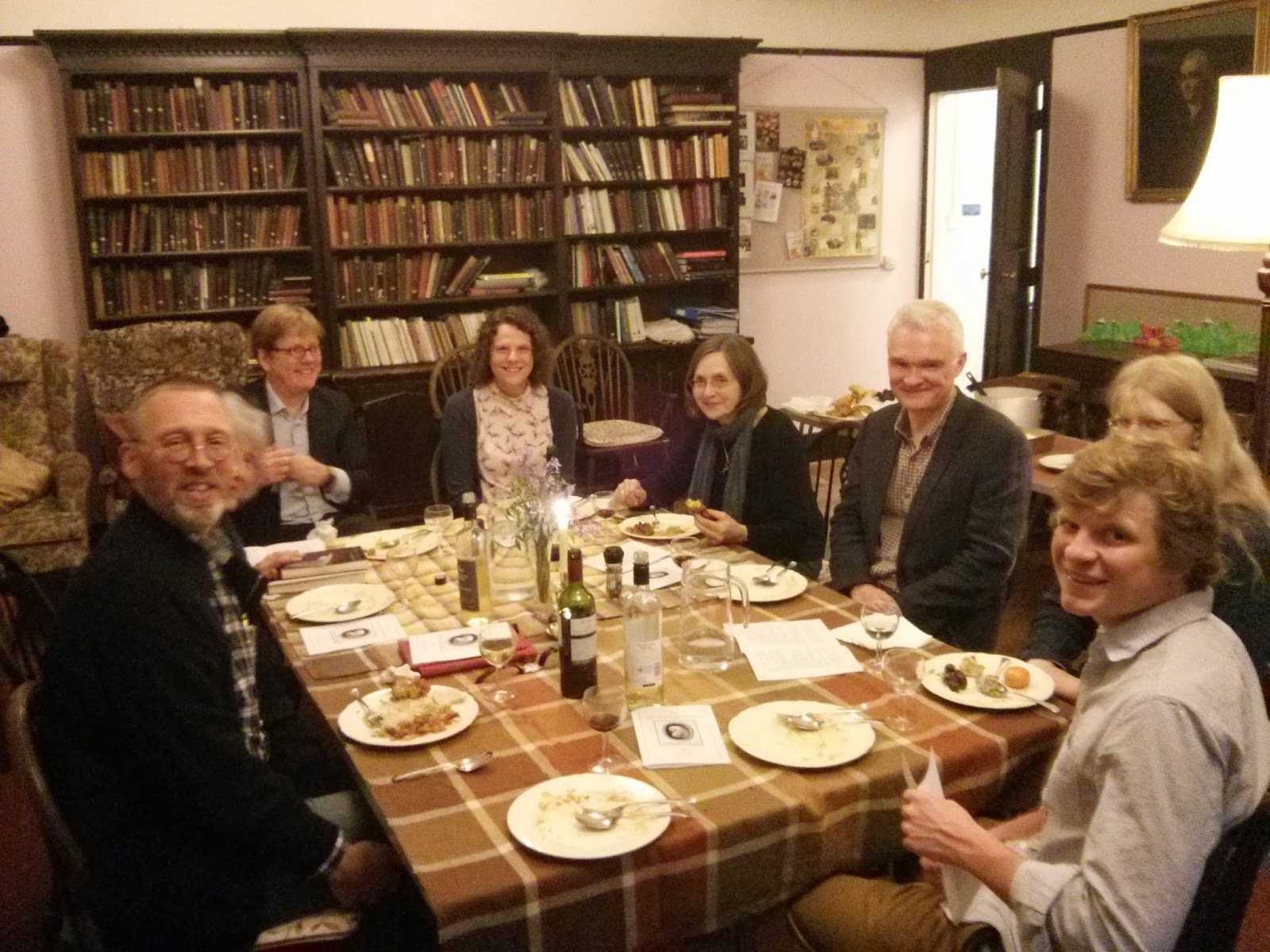 Update 26 June 2014. Please click on this link to go to a page where you will find the most recent revision of the Epicurean Liturgy and also links to all the various posts on this little project to create a modern Epicurean practice.

Yesterday, nine of us met in the church common room for another enjoyable "Epicurean Gathering" - cooking, eating, meditating and then looking together at Epicurus' "tetrapharmakos" (four part-cure).

Don’t fear god,
Don’t worry about death;
What is good is easy to get, and
What is terrible is easily to endure.

The text we used to guide our conversation was by D. S. Hutchinson which you can get at the link below:

Here's a link to the liturgy we used

At the end of this post I have also put up just a few introductory links to various helpful sources of things Epicurean.

Anyway, after last night, it seems worth telling here the basic story of how this gathering came about.

It is, however, perhaps worth beginning by briefly noting an important place in which Epicurus appears in the Unitarian tradition. The third American President, Thomas Jefferson (1743-1826), who was himself a Unitarian, said in a letter to William Short in 1819 that "I am an Epicurean. I consider the genuine (not the imputed) doctrines of Epicurus as containing everything rational in moral philosophy which Greek and Roman leave to us." In the same letter he wrote: "Epictetus and Epicurus give laws for governing ourselves, Jesus a supplement of the duties and charities we owe to others."

I'm very much with Jefferson on this and the two central examplars for me in my own religious (naturalist) and philosophical life remain Epicurus and Jesus. (Should you be interested, the Smithsonian has produced a beautiful facsimile edition of Jefferson's "Life and Morals of Jesus" - the so-called "Jefferson Bible". It's available from most bookshops). Anyway, back to the story . . .

In 2000 I was very fortunate, if only for a short time, to have been a student of the philosopher, Timothy Sprigge. (It is entirely coincidental, but highly fortuitous, that he was for many years a member of St Mark's Unitarian Church in Edinburgh.) On getting to know him I was particularly struck by his concern to articulate the "religious availability" of certain philosophies - i.e. to see whether they could function for an individual as an actual, practical religion. Although initially I went to him to study the work of Josiah Royce (1855-1916) in the end it was his work on Spinoza (1632-1677) that began increasingly to capture my imagination, not least of all because of the way Timothy made his thinking religiously available to me (see his last book "The God of Metaphysics"). All in all he inspired me in 2008 to try my hand at composing a Spinozistic liturgy and, here in Cambridge, we used it in the evening service for about six months. Alas it never quite seemed to work and, in my opinion, it may be considered a failure, albeit or a very constructive kind. I learnt a lot from the attempt but I leave it to someone other than me to see if it can be done properly, more succinctly and beautifully. But, for the record, here is a link to that service.

However, another religious naturalist philosophy which had interested me since my teens was that of Greek philosopher Epicurus and his Roman follower, the poet Lucretius. (I came across the latter thanks to my passion for A. E. Housman's poetry whom I studied for my 'O' levels). As I spent more and more time with Epicurus and Lucretius - all the while becoming more and more struck by the contemporary relevance of what I found - I began to consider the religious availability of their philosophy. Perhaps something could be done with their work that I couldn't do with Spinoza's.

But it was only in 2011 that I found both the time and the appropriate inspiration to prepare for myself a little liturgy that I thought would work. However, for various reasons, I never got round to trying it out and it so for a couple of years it languished on my hard drive.

Now, here in Cambridge, on many Wednesday evenings throughout the year, we gather to spend a couple of hours together in open conversation about life, the universe and everything. Often the conversation starts (though rarely finishes) with something connected to the theme of the previous Sunday's address and, since I would often speak of Epicurus and Lucretius, their philosophy was, naturally, discussed many times. One evening in February 2013, after a BBC radio programme on Epicurus had been aired, I admitted that, were I able to "start afresh" in religion, I'd probably encourage the creation of a community that met in a fashion akin to that presented by my little Epicurean liturgy. With that thought in mind I published a blog post about the programme and also my liturgy. You can read that here:


An, as yet, only imagined Epicurean Gathering to meditate, to philosophize, and to eat together

On reading this post a couple of the people present that evening were sufficiently interested in the idea to suggest we gave it a go. So, in June 2013, three of us met and actually tried it out. You can read a little about that occasion at the following link.

It was a most enjoyable and fruitful occasion and the two people involved, Dean Reynolds and Lewis Connolly, made the very constructive suggestion that the opening section should involve those attending more explicitly and so a revision of the text into responsorial form was put in place. (This is the text you can find at the top of this post).

As you can see, nearly another year has passed since that first gathering but I'm pleased to say interest in Epicurus, Lucretius and this liturgy remained alive and so I was particularly delighted when a couple of people in the current congregation suggested we hold another another. We were three, but this time we were nine. It makes me ask whether next time we'll be twenty-seven? Unlikely, to be sure, but who knows? Stranger things have happened and, perhaps, something like this might catch on . . .

So, that's the story so far. Please feel free to use the liturgy yourself and/or let me have any thoughts you have either about it, the contemporary relevance of Epicurus' and Lucretius' philosophy, or about other ways we might make it religiously available today.

As promised, below are a few links:

Translations of Epicurus' and/or Lucretius:

My preferred modern translation by David R. Slavitt of Lucretius' "De Rerum Natura" (On the Nature of Things)

Yewtree said…
Interesting - I feel very drawn to the Spinoza liturgy, less so to the Epicurean one. That is odd because I feel as though I "get" Epicurus more than I "get" Spinoza.

I would be interested to know why you feel that the Spinoza one failed?

I also really realy like that prayer by Timothy Sprigge, which I first heard when Peter Godfrey used it in a service, and I asked him for a copy of it.
5 May 2014 at 23:02

My apologies for such a late reply to your question.

For me the Spinozistic liturgy failed because in the form I cast it seemed to be trying too hard to say what it really needed to show. Over the summer I'll perhaps try and see if I can do it better.