The Feast of the Ascension or a Commingling in the Weather World? 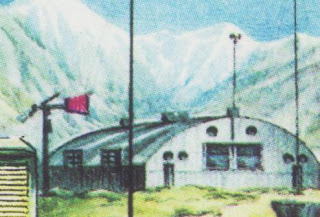 Thursday was the Feast of the Ascension when, forty days after Easter, those who hold to a traditional Christian faith claim that Jesus ascended bodily into heaven from whence he will later return.

This was a festival that, for whatever reason, never really impacted upon me as a child so my discovery, in my late teens, of the Anglo-Catholic shrine at Walsingham in the county of Norfolk felt all the more odd and even amusing for there, sticking out of a hole in the ceiling of a side chapel, are to be seen the soles of Jesus' feet, the last and not very glamorous sight of him as he disappeared into a heaven located somewhere above earth. You can, if you look closely, find many similar depictions in our churches, especially in stained-glass windows.

Today the story is for many of us almost impossible to accept as being in anyway factually true. This is partly, though by no means wholly, because anyone with even the vaguest knowledge of contemporary cosmology knows that the idea of anyone ascending up into heaven makes no sense as there is no absolute up nor down in the universe. I leave aside today the additional matter of the unlikely existence of a place that we could meaningfully call heaven.

My thoughts today centre on the problematic concept of 'up' and its inseparable twin 'down.' Related to this are, of course, ideas of earth and heaven (or sky). The key problem for me is that these words -- in their quotidian senses -- have a tendency to make us think of heaven and earth, of earth and sky as somehow being radically divided and, therefore, different and divided realms of existence.

So in the Ascension story as traditionally interpreted the discrete, individual Jesus -- God himself no less -- walks upon a discrete, individual place, earth and, having redeemed it (although really only some parts of it) by his own unique sacrifice, ascends, bodily, to another discrete, individual place -- heaven -- that hovers somewhere above the earth. From there he sends down a rather more tenuous individual -- the Holy Spirit (also God himself) -- to live on earth to continue his former work in discrete individual human beings belonging to a discrete corporate body, namely the Christian Church. From heaven the 'glorified' Jesus continues to look down upon this earth observing all things until, at some still unspecified time, he will return as he went, to judge the living and the dead.

I am well aware that this brutally truncated and schematised version of the story doesn't do justice to the immense sophistication of Christian thought on this matter but all the sophistication in the world cannot hide its underlying claim that there exists divided realms of both space and morality; a claim which, I have to say, I find neither healthy, helpful nor true.

Now, as most of you will be well aware I am strongly encouraging us to consider a Spinozistic philosophy that is pantheistic and panpsychic in outlook which holds there is only one reality, God-or-Nature, and expresses a belief that we, and all things, are in fact modes of this single reality. It is important to realise that this is a philosophy which does not deny that from the perspective of any apparently individual thing there exists other apparently individual things which can be considered to be 'above' or 'below' it, or some reality we call earth and sky, but, as it acknowledges this limited perspectival reality, it goes on strongly to claim that the whole forms one continuous realm -- an interdependent and interpenetrating Divine unity. In other words -- though they are not quite yet the words I will come use by the end of this address -- the 'earthly' realm 'below' our feet is the same as the 'heavenly' realm, the sky, which is 'above' our heads.

The trouble with the way I have just described things is that, although it says that which is 'below' is the same as that which is 'above', it still implies the existence of some sort a gap between them; a nether region, a type of empty space in which the winds blow and the weather happens.

But is it really empty? Of course not! The clue is in the wind and weather because, considered rightly they don't happen in some empty space they are this realm. To use a manner of speaking with which I hope you are becoming familiar, it is helpful to think of them not as nouns but verbally as windly-, or weatherly-being. What is particularly wonderful about windly- or weatherly-being unlike other more apparently solid ways of being such as, say, human-being or stonely-being, is that we can see -- or better feel and understand, for we cannot see the wind with our eyes -- that the wind and the weather are not discrete entities in any way closed in on themselves. Their 'boundaries' -- that is to say the point at which they begin and cease to be be a certain kind of wind and a certain kind of weather -- is not at all clear. Each state of windly and weatherly-being flows imperceptibly into another. In other words there exists no absolute boundary between different states. Even when this windly- and weatherly-being meets head-on a more obviously solid and distinct way of being, such as a rock or a person, the process still does not stop. The wind and rain will always be 'penetrating' the rock; the wind and rain is always 'entering' our humanly-being in a variety of ways and not only physically, but also emotionally and psychologically. As anyone who has walked for any length of time in the open air will know, the currents of the air and the weather effect the currents and weather of our humanly-being. The anthropologist Tim Ingold points us to a wonderful thought of the philosopher Maurice Merleau-Ponty who wrote:

As I contemplate the blue of the sky I am not set over against as an acosmic subject; ... I abandon myself to it and plunge into this mystery, ... I am the sky itself as it is drawn together and unified, ...my consciousness is saturated with this limitless blue (Journal of the Royal Anthropological Institute (N.S.), S19-S38, 2007 p. S.28).

So we must ask just exactly where does windy- and weatherly-being stop and stonely-being and humanly-being begin? Stop and think about it for a moment. . . . I don't know about you but, try as I like, I cannot find any break, any real space between any of these things. I find that I am, indeed, the sky itself, this stone, this wind -- not because I am precisely the sky, the stone and the wind, but because we are all commingling in the unbroken continuity that is Being itself.

I am stating the reality of the commingling of all things not merely because of a purely personal experience but because it is expressed by the mystics from all traditions and, increasingly, because something similar seems to be being suggested by those working in the new physics.

Yet we all know how easily we turned away from this way of experiencing and, therefore, understanding the world. As Ingold notes "a habit of thought . . . leads us to suppose that the world is inhabited by entities that are already closed in upon themselves [and] prevents us from seeing that life can be anything other than an interior property of things" (ibid. S. 31). However, he goes on to say that,

Conceived as the creative potential of a world-in-formation . . . life is not in things; rather, things are in life, caught up in a current of continual generation. The recognition that all of existence is suspended in such a current underlies the ontological commitments of many of the peoples credited, in classical anthropological literature, with cosmologies of ‘animism’. According to a long-established convention, animism is a system of beliefs that imputes life or spirit to things that are truly inert. But this convention is doubly misleading. For one thing, animism is not a system of beliefs about world but a way of being in the world, characterized by openness rather than closure -- that is, by sensitivity and responsiveness to an environment that is always in flux. For another thing, it is not a matter of putting life into things but of restoring those things to the movements that gave rise to them (ibid. S. 31).

Our own liberal Christian tradition has consistently claimed that the religion of Jesus was more a way of life than it was a set of formal beliefs about the world and doesn't this resonate with Ingold's words?

In the light of his thoughts may we not also creatively reinterpret the story we are considering today to be general one about the commingling of all humankind (and all other 'things' of course) in God-or-Nature rather than the ascension a divine Jesus up to Father? Thought of in this fashion this problematic festival -- recast as a commingling rather than an ascension -- might actually help us better express our desire for "openness rather than closure"; might help us to respond with sensitivity to an "environment always in flux." It may also help us reconnect with an historic task of our liberal religious community, namely the desire to bring about the restoration of all things -- ourselves included -- "to the movements that gave rise to them"? It's a way of intelligently recasting our former understanding of, and commitment to, what we used to call universal salvation and in a wider, ecological, context.

So may we, in our own liberal lives and communities, increasingly come to experience this commingling of all the realms of existence and understand that "life is not in things; rather, things are in life, caught up in a current of continual generation."
Email Post
Labels: anthropology ascension commingling God-or-Nature Ingold liberal religion Merleau-Ponty Spinoza Unitarian weather world
Andrew James Brown
My name is Andrew James Brown. I’m a philosophically/theologically inclined writer with sympathies towards Christian atheism, D. G. Leahy’s “thinking now occurring for the first time”, a Lucretian inspired religious naturalism, new materialism and Kyoto School philosophy; also a photographer, cyclist, walker and jazz bass player. In addition to this, I’m the minister of a small, liberal-religious, free-thinking community in Cambridge (UK)