What can be shown cannot be said 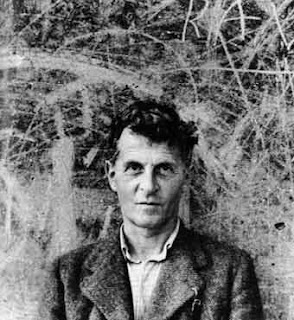 Last week I gave an address calling for liberals to reconnect with the important insight that following, with passion and commitment, a particular spiritual model or prototype is not an optional route, but a necessary element in the life of anyone who wants to develop into a genuinely free and creative spiritual human-being. I drew an analogy from my other professional career - namely the teaching of musicians who wish to play jazz. (See here).

I concluded that address with a recommendation to reconnect with the normative model or prototype that our own Unitarian and Free Christian tradition inherits - Jesus. There are other equally efficacious models - for example the Buddha, Lao Tse and, to give a modern example, spiritual leaders such as Sri Chinmoy whose members visited here last week - but for all kinds of contingent reasons own own model happens to be Jesus. However, even as I finished offering this apparently simple advice I was swiftly reminded by a member of the congregation that, as religious liberals, many of us need to jump another broad and ugly ditch first. I was, in truth, aware of it because I, too, had to jump it once - it was simply that I had forgotten how difficult it was to jump. My apologies for that.

The broad and ugly ditch is significant; it is the profound scepticism many of us have (or had) concerning the need for something like the Gospels in the first place. The often sublimated thought is that, if we just try a little harder to be more logical and rational in our thinking we will finally be able to state clear propositions about life and its meaning. In short we should not need the odd kind of texts that are the Gospels.

So we engage in philosophy (metaphysics) or science. But both these human endeavours have a big flaw which is that, though they can begin to give us a 'big picture view - and helpfully (and I think indispensably - which is why I have been exploring Spinoza) begin to map the limits of our language, world and the basic relationships that exist between us as individuals and the whole - they are unable, in the end, to reveal the meaning of any individual's life; the pressing question of what we are actually to do in life; the pressing question of actually how to live in the dirt and dust of the world. Two thinkers who came to feel this particularly strongly were Tolstoy and Wittgenstein (photo above).

Tolstoy studied for many years philosophy and scientific knowledge and came to realise that they didn't answer this basic question of the meaning of an individual's life. In consequence he fell into a dreadful despair and at one period even contemplated suicide. After much struggle - which you can read about in his short but powerful Confession - he came to the conclusion that a satisfactory answer to the question only came to those who live a life of faith. He looked to the peasants of his own time and saw that their religious faith enabled them to live with meaning, passion and courage despite their many, many vicissitudes. However, when he looked at his own life and his own wealthy, intellectual and sceptical class he found there a profound lack of any deep faith and, consequently, a profound lack of meaning.

So he took a conscious decision to return to the Russian Orthodox Church but quickly found that, for all its positive elements, he could not swallow it whole. Faith, yes, but Orthodox Christianity with all its superstitions and superfluous practices, no. So his project turned to stripping Christianity of what he saw as its wholly unnecessary aspects and began to teach, almost exclusively, the moral teachings of the Gospels.

To do this he prepared a version of them that helped people better to ascertain the practical moral heart that he thought could be found within them. That book is the Gospel in Brief. Do be clear that his version is an interpretation of the Gospel's message but I would add that, of necessity, so is every reading of them including the very conservative Christian ones that claim they are not interpreting them! For many rational and emotional reasons - none of which I have time to speak about here (but ask me if you want to know) - I find Tolstoy's general principle of interpretation sound and so have taken to using it myself.

In 1914 Wittgenstein was serving with the Austrian army when he discovered a small bookshop in Tarnow, a town then under Austrian rule but now in southern Poland. As the story is recounted to us by Bertrand Russell the shop had only one book: it was Tolstoy’s Gospel in Brief, and that was why Wittgenstein bought it. He started reading it on September 1st 1914 and subsequently carried it with him at all times, even memorising passages by heart. He was so taken with it that he became known to his comrades as the man with the gospels and he constantly recommended the book to those in distress. Wittgenstein himself said that the book virtually kept him alive.

At this time Wittgenstein was also writing what became one of the most influential books of twentieth-century philosophy the Tractatus Logico-Philosophicus. This book has the reputation of being a phenomenally difficult work. It is hard (and I make absolutely no pretence to have understood it in its totality) but this difficulty arises, partly, because of what the philosopher and biographer of Wittgenstein, Ray Monk, calls its "utter weirdness of style" and because "nothing before or since, in philosophy, science or literature, has been written quite like it."

Yet for all its difficulty I want to make you aware of this book's essentially simple central theme which can, I think, be incredibly helpful to those of us who really want to reconnect with some kind of religious faith but who are also painfully aware of the dangers that go along with such a move, dangers such as being asked to believe in the proverbial three impossible things before breakfast and of becoming strangely religious and even a little 'God-squaddy.'

Towards the end of the Tractatus Wittgenstein says "There are, indeed, things that cannot be put into words. They make themselves manifest. They are what is mystical" (6.522). Those things which cannot be said are ethics, aesthetics, religion, the meaning of life, logic and philosophy. Ray Monk observes that "Wittgenstein appears to believe, there are indeed truths, but none of these truths can be expressed in language; they all have to be shown, not said" (p.21).

Importantly, in a letter to von Ficker who he hoped would publish the book - though this letter can hardly have inspired confidence in the book's use - Wittgenstein wrote:

. . . the point of the book is ethical. I once wanted to give a few words in the foreword which now actually are not in it, which, however, I’ll write to you now because they might be a key for you: I wanted to write that my work consists of two parts: of the one which is here, and of everything I have not written. And precisely this second part is the important one. For the Ethical is delimited from within, as it were by my book; and I’m convinced that, strictly speaking, it can ONLY be delimited in this way. In brief, I think: All of that which many are babbling I have defined in my book by remaining silent about it (Wittgenstein, Letter to Ludwig von Ficker, October or November 1919, translated by Ray Monk).

Not surprisingly von Ficker, reading that the most important part of it was defined silently, chose not publish this book. But Wittgenstein did know what he was doing. He needed to set the limits of what could be said so we could be free of illusion and have a chance to get on with the practical business of life. We see some of this in the final two, very famous, paragraphs in the Tractatus:

6.54 My propositions are elucidatory in this way: he who understands me finally recognizes them as senseless, when he has climbed out through them, on them, over them. (He must so to speak throw away the ladder, after he has climbed up on it.) He must transcend these propositions, and then he will see the world aright.

7. What we cannot speak about we must pass over in silence.

So what of the Gospels you may be asking? Well Wittgenstein seems to have thought that although the Gospel he encountered in Tolstoy's version could not say anything about how we should live, he did believe that it could show the way to live.

In other words we may - though some don't - consider the Gospel to be the second, silent and very practical part of his book. Both Tolstoy and Wittgenstein in this matter (and whatever the many flaws and failures in their own attempts to live up to this ideal) are people who insist that, if we want to understand and experience the meaning of life we must direct ourselves us to the actual experience of living and not to any theory about it.

Those of us who like to think about religion, and as this address reveals that includes me, can find this realisation hard. But I've been saying a great deal over my eight years as your minister and I have increasingly realised that, no matter how clever and erudite it may (or may not) be - it will never be able to say much at all; indeed most of it will be, speaking Wittgensteinly, nonsense. I am, once again, forced to reveal my ultimate commitment to a mystical understanding of religion.

At best all I can say to you as your minister is also merely a ladder that, once climbed, must be thrown away. If any of you want to find meaning in your own life buy a copy of the Gospels and start living the lessons shown there.

Since nothing can truly be said about this latter matter I'll simply stop talking and pass into silence.
Email Post
Andrew James Brown
My name is Andrew James Brown. I’m a philosophically/theologically inclined writer with sympathies towards Christian atheism, D. G. Leahy’s “thinking now occurring for the first time”, a Lucretian inspired religious naturalism, new materialism and Kyoto School philosophy; also a photographer, cyclist, walker and jazz bass player. In addition to this, I’m the minister of a small, liberal-religious, free-thinking community in Cambridge (UK)

Anonymous said…
Thank you for this and the previous post. Stephen Mitchell's book was the one that led me to Jesus as a man with very good lessons to teach. It stripped away what little I knew--and intuitively rejected--of "the Son of God" myths. Your posts challenge me intellectually (not hard to do these days, I'm sorry to say), but also point in such a very rational, mystical direction. Thank you, again.
18 May 2008 at 17:13

mlcprs said…
Wittgenstein saying that the important part of "Tractatus" was everything he hadn't written had a jazz parallel in a recent "Simpsons" episode. The Simpsons went to see Lisa's favourite sax player, Bleedin' Gums Murphy, playing at a bar. A nearby customer wasn't appreciating it, and Lisa told him "You have to listen to the notes he's not playing!", to which he dryly replied "I can stay at home and listen to those."
26 May 2008 at 13:11