The Dark Mountain Project—On one very helpful, creative, uncivilising consequence of getting a chest infection and going to bed 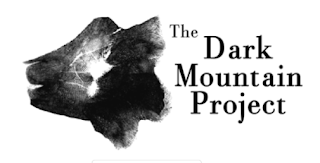 Late in 2010 I stumbled across The Dark Mountain Project whilst exploring the powerful poetry of Robinson Jeffers — Jeffers' poem "Rearmament" concludes with the words "the dark mountain".  Here's how the project describes itself today:

The Dark Mountain Project is a network of writers, artists and thinkers who have stopped believing the stories our civilisation tells itself. We see that the world is entering an age of ecological collapse, material contraction and social and political unravelling, and we want our cultural responses to reflect this reality rather than denying it.

The Project grew out of a feeling that contemporary literature and art were failing to respond honestly or adequately to the scale of our entwined ecological, economic and social crises. We believe that writing and art have a crucial role to play in coming to terms with this reality, and in questioning the foundations of the world in which we find ourselves.

The project impressed me greatly — especially their manifesto "Uncivilisation" of which I have an early, hand-numbered copy — but, at the time, I was so wrapped up in a shedload of other things that  I didn't follow it up as much as I might. [Here's a link to one address in 2011 which I explored Jeffers' work and pointed folk to the project.]

Cue this week. I've come down with a bad chest infection which, for the first time in five years forced me to go to the doctor. I'd developed the kind of cough that, were a member of my congregation to have it, I'd send them there immediately — I figured I really should listen to my own advice for once. Anyway the upshot was that I was sent home with some medication and an instruction to stay in the warm and rest properly.

Back at home and in bed I decided quietly to explore a few religious naturalist/ecological trains of thought and along the way came across a talk given at Schumacher College in June 2014 by Paul Kingsnorth and Dougald Hine, the two founders of the project.

As I watched it I realised just how much of what they talked about had taken root in my own thinking and work since first reading their manifesto. I was, I have to say, powerfully impressed by their general manner, clarity and calmness and it has set me thinking about if, and how, I might better engage with the project in the coming year.

Anyway, if you're sufficiently intrigued, here's the video to watch for yourself.

Anonymous said…
The real dark mountain is located in the Pennines of
England, where many a ghost rambles the moors. Kinder Scout
is a moorland plateau near the Dark Peak; which is named
thus for the underlying millstone grit. It was the landscape
that inspired the Bronte sisters - they and their mother and
siblings all died from consumption.