TONIGHT @ 7.30pm—A conversation about "Religion after the death of God"—A Cambridge Festival of Idea event

Tonight I'm taking part in an evening conversation with Green Party politician and academic, Rupert Read, on religion after the death of God. The evening is chaired by Professor Stephen Watson and is part of Cambridge University's Festival of Ideas.

It starts at 7.30pm in the Memorial (Unitarian) Church on Emmanuel Road where I am minister and all are welcome. It's free too!

When, in 1882, Friedrich Nietzsche announced “the death of God” it signalled that an important change was occurring in the religious and philosophical form of life that had prevailed across Europe for centuries and, today, we know that for many people foundationalist conceptions of God have become increasingly implausible.

This evening is an introduction to the possibilities that have opened up for religion as a result of this process. As Mark Wrathall notes in his introduction to “Religion after Metaphysics” (Cambridge University Press 2003 p. 1),

“. . . the loss of belief in a metaphysical god that is the ground of all existence and intelligibility, and even the loss of belief in a creator God who produced the heaven and the earth is not a disaster” and that the “absence of foundational God opens up access to richer and more relevant ways for us to understand creation and for us to encounter the divine and the sacred. Thus, the death of the philosopher’s God may have provided us with new and more authentic possibilities for understanding religion that we blocked by traditional metaphysical theology (or onto-theology).”

Rupert Read has written a book which, in part, explores the associated subject of religion without belief: “Philosophy for Life” (Continuum, 2007). 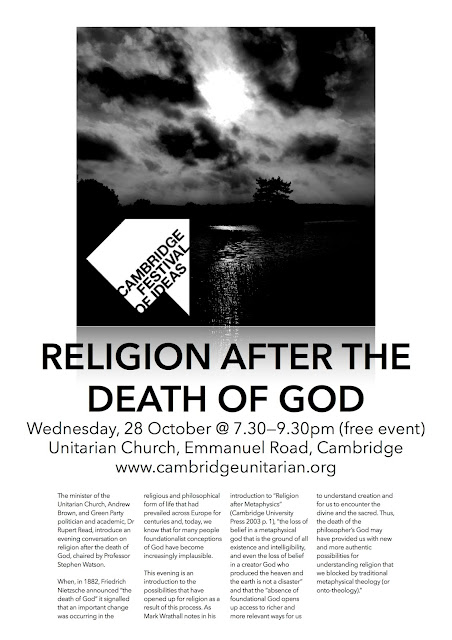