Why Don't You Tickle Me?—A few thoughts on Voluntary Simplicity 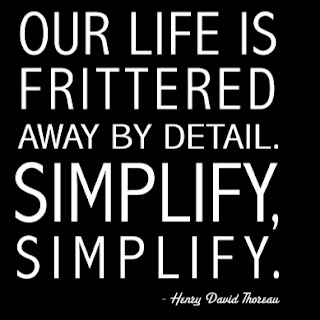 At various times over the past five years I’ve explored with you aspects of a general outlook called “voluntary simplicity.” I first became acquainted with the idea during my late teens and early twenties when I began to read the work of Henry David Thoreau (1817-1862). In Walden he memorably writes:

“Our life is frittered away by detail. An honest man has hardly need to count more than his ten fingers, or in extreme cases he may add his ten toes, and lump the rest. Simplicity, simplicity, simplicity! I say, let your affairs be as two or three, and not a hundred or a thousand; instead of a million count half a dozen, and keep your accounts on your thumb nail. In the midst of this chopping sea of civilized life, such are the clouds and storms and quicksands and thousand-and-one items to be allowed for, that a man has to live, if he would not founder and go to the bottom and not make his port at all, by dead reckoning, and he must be a great calculator indeed who succeeds. Simplify, simplify. Instead of three meals a day, if it be necessary eat but one; instead of a hundred dishes, five; and reduce other things in proportion.”

Of course, it was an outlook that my own Christian upbringing had prepared me for reasonably well because Jesus, too, clearly took to heart the idea of voluntary simplicity. That so many expressions of the church have so consistently failed to notice and act upon this remains, to me anyway, one of the most puzzling and depressing things about institutional forms of Christianity.

Anyway, as I’ve got older I have become more and more convinced, not only that across the generations, geography and cultures was voluntary simplicity always one of the wisest general outlooks on offer, but that it is now one which seems to me to be increasingly necessary to adopt, especially by those of us living in the most affluent societies in the world. Indeed, Duane Elgin, who in 1981 published what is still perhaps the most well-known book on the subject — Voluntary Simplicity — notes in a new introduction to a revised version of his text that:

“. . . the public conversation about simplicity is shifting from complacency to urgency. In the 1970s, there was little public concern about climate change, massive famines, energy and water shortages, and more. Although these loomed on the horizon, the majority of people were focused on the “good life” in the short run. More than thirty years later, these are no longer problems for the distant future; they represent a critical challenge to the human community now. The more closely we look, the more compelling is the evidence that the human family has exceeded the ability of the Earth to support humanity’s current levels of consumption, let alone that projected for the future. There must be dramatic, global changes in our overall approach to living and consuming if we are to avoid a future of immense calamity. Simplicity of living, by whatever name, is moving from an easily dismissed lifestyle fad to an approach to living that is recognized as a vital ingredient for building a sustainable and meaningful future.”

But this fairly uncontroversial claim about the need for voluntary simplicity (at least in a congregation like this) obscures something very, very important about it. Namely, that it is far from being a simple, one-dimensional outlook but is, instead, an endlessly complex and developing way of being in the world and that one person’s voluntary simplicity often turns out to be different from another person’s and that there can be no simple “cookbook for sustainable lifestyles” containing all the answers. To some people this can make the concept seem as if it is next to useless, especially when it is promoted thoughtlessly and carelessly by people who are in a position to be able to chose to live a simple life — someone like me.

I have very much in mind today the enormous numbers of refugees  in the world and also the poorest in our own British society who are finding themselves pushed more and more towards poverty thanks to the current cuts — cuts which seem to me to be wholly unwanted. These are people who are increasingly being forced into lifestyles that may superficially look simple but which are really desperately complex and which are vanishingly far from being voluntary.

We we are helped to get a better grip on what kind of thing voluntary simplicity is not by hunt out some boundary cases where what might look, from a certain perspective like voluntary simplicity actually turns out to be something different, darker and deeply disturbing — something that should not be encouraged in any shape or form but, in fact, actively challenged and radically overturned.

However, before I get to my two boundary cases I want to be clear about three things voluntary simplicity is not.

There is a fourth thing that it is not and it is upon this this I wish to centre my remaining brief reflections. It is that voluntary simplicity is not “impoverished living”. Duane Elgin puts it this way:

“Poverty is involuntary and debilitating, whereas simplicity is voluntary and enabling. Poverty is mean and degrading to the human spirit, whereas a life of conscious simplicity can have both a beauty and a functional integrity that elevates the human spirit. Involuntary poverty generates a sense of helplessness, passivity, and despair, whereas purposeful simplicity fosters a sense of personal empowerment, creative engagement, and opportunity. Historically those choosing a simpler life have sought the golden mean — a creative and aesthetic balance between poverty and excess. Instead of placing primary emphasis on material riches, they have sought to develop, with balance, the invisible wealth of experiential riches” (Voluntary Simplicity, p. 27)

Both my boundary cases today are connected with “impoverished living”.


Tickle Me by Randy Newman

What can you do to amuse me
Now that there’s nothing to do?
The TV set’s busted and can’t get a picture
The radio plays nothing but news

Why don’t you tickle me?
Gee whiz won’t that be fine
What a great idea
What a perfect way to kill some time
Can’t stop to think ‘cause if we do we’ll lose our mind

Don’t we have fun every minute
Oh what a gay life we lead
One chocolate milkshake with two straws stuck in it
What else does anyone need?

As the British comedian David Elms puts it:

“First off, [Newman’s] what I like to call “truthy” . . .. Newman’s songs aren’t about showing off: there’s not a big word in sight. Yes, they have their targets – US foreign policy, greed, bigotry, colonialism, hypocrisy, God, to name a few – but you won’t find the arched eyebrow and knowing grin of fellow satirical giant Tom Lehrer. Instead of smug professorial wit, or Minchin-esque linguistic dexterity, the blade is hidden under an innocent face and the slurred, honest delivery of a common man. It’s that same plain honesty that produces beautifully simple love songs such as Feels Like Home or the Oscar-nominated When She Loved Me. I never feel like Newman is trying to sound really clever or nice – he’s just trying to communicate truthfully. And comedy should be a bit rough, right?” (Source: The Guardian)

The song generally makes most people laugh (as they did in the version we have just heard) when they first hear the line, “Why don’t you tickle me?”. It’s a line that seems so innocent, charming and plain funny. But as the overall weight and direction of the little song begins fully to sink in, a very different, unfunny picture emerges. What we seem to have in Newman’s brilliant miniature is an account of two people right on a boundary. They have entered into poverty but they haven’t, yet, collapsed into complete despair about this. However, we feel that it might only be the protagonist’s darkly ironic sense of humour that is keeping them this side of hopelessness. They have almost no money and so can’t go out to do anything, except now and then  buy a chocolate milkshake to share, their TV set’s busted and the radio plays nothing but news (and we can imagine that then, as now, bad news predominates). But, hey, he says, what more does one need and, me may surmise, he feels that tickling might be genuinely fun. But, what happens after they finishing their chocolate milkshake and the tickling? Well, our hero admits he’s going to have to think of something else to do not least of all because they seem to be on the point of even giving-up talking to each other.

The point to see clearly is that in this song we see a simple pleasure being employed, not voluntarily, but as a strategy forced upon them to help take their minds off their increasingly impoverished living.

My second boundary case is found in a short piece written by the German Marxist philosopher, Ernst Bloch (1885–1977) during the 1910s. I brought it before you in a different context about five years ago:

“What are you doing? I asked. I’m conserving light, said the poor woman. She sat in the dark kitchen, a long time already. That was certainly easier than conserving food. Since there isn’t enough for everyone, the poor step in. They work for the rich even when they rest alone” (Bloch — Traces p. 9).

Here we find another person who is living simply. But, as is abundantly clear, she is not doing this voluntarily. However, unlike Newman’s lyric, which makes no judgement at all about the people involved or the situation, Bloch’s text contains a strong implied judgement, not so much about the woman, but rather about the overall situation.

Bloch sees with absolute clarity that somehow we have managed to create a world that structures itself so that it always appears to the greatest number of people possible there isn’t enough for everyone (although there is, of course, more than enough for everyone if we were able to become more modest in our desires and appetites) and which then forces the poorest and most vulnerable people to pick up the slack. Those poor people, again often without realising it, end up working for the rich even when they rest alone, hungry, cold and in the dark.

In a community with progressive concern such as our own we need always to be protesting as loudly and effectively as possible against this kind of living because it is involuntary and debilitating, it is mean and degrading to the human spirit and it generates a sense of helplessness, passivity, and despair.

But, even as we must find ways to help people out of these kinds of dreadful, unchosen situations, we also need to keep alive in our hearts and minds something paradoxical which is that consciously turning off our lights, conserving and eating less food (especially of the highly processed kind), spending time tickling each other instead of watching TV and listen endlessly to only bad and negative news, and sharing just one chocolate milkshake between us instead of each of us feeling we must imbibe some super-sized measure, are precisely the kinds of things we should all be trying to do if we want to see everyone share in the still abundant riches of the world.

Whenever we are able to do this and begin to live a life of conscious simplicity then many of us bear eloquent witness to the wonderful truth that our spirits are elevated and we gain a deep sense of personal empowerment, creative engagement, and opportunity. We know the every little act helps both our own well-being and contributes to the potential well-being of the whole planet.