An Inclusive Community — An address given at evensong in Queens' College Chapel, Cambridge

I gave the following address this morning at the Memorial (Unitarian) Church in Cambridge in preparation for giving it at Queens' College evensong as part of a series in which their chapel society is looking at how they engage as community. If you click on the picture below you will be able to see who were the other speakers in the series.

In my Father’s house there are many dwelling-places. If it were not so, would I have told you that I go to prepare a place for you? (John 14:2 NRSV)

Firstly, I’d like to thank the Chaplain, the Revd Tim Harling, for inviting me to speak tonight. I honoured to be here with you.

I have been asked to speak this evening on an attractive, but notoriously difficult subject, namely, “An Inclusive Community”. Thinking about what such an inclusive community might look like and how it may be achieved is likely to be one of the most difficult questions we’ll ever have to consider in our lives. What follows are simply my own considered thoughts on the matter, thoughts with which, of course, you need not agree but, at the very least, I hope they will encourage a helpful conversation on the matter afterwards over drinks.

As a minister in the four-hundred-and-fifty year old Unitarian, Universalist and Free Christian tradition I continue to be inspired and influenced by one of the great eighteenth-century teachers and practitioners of Universalism, George de Benneville (1703–1793), who encouraged those who wished to follow his example to:

“Preach the Universal and Everlasting Gospel of Boundless, Universal Love for the entire human race, without exception, and for each one in particular. [And to] Proclaim and publish to the people of the world a Universal Gospel that shall restore, in time, all the human species without exception.”

Following on from this, my address is based on two assumptions. Firstly, that an inclusive community would be a good thing and, secondly, that the word “inclusive” should be taken in the fullest sense possible; at the very least, this must include every individual human being in every age and clime who has found, is finding, or will find themselves living in this extraordinary world of ours.

But, as we sit together in this Christian place of worship, the problem with such a beautiful, inclusive aim, as de Benneville intimately knew, is that no actual, existing Christian church has ever been able, itself, to be this inclusive community. It is relatively easy to see why this is so.

Firstly, we can see through the two-thousand years of Christian history how this or that interpretation of Jesus’ status and role has all too easily decided to exclude from legitimacy other, different, interpretations — of which there have been, and still are, many. The historic creeds of Christianity were, of course, one of the most notable products of this dynamic which pushes against the fact that there never has been a single thing called Christianity but only ever Christianties.

Secondly, and even when and where there has been significant agreement on creedal matters of belief, we can see that although certain styles of worship may appeal to one group they do not appeal to everyone.

So, on both obviously theological and other grounds, often more related to aesthetics, we can see how genuine, inclusive community has remained beyond the reach of any actual, existent Christian church.

But, of course, if we are considering inclusivity in the broad way I am, we must acknowledge that Christianity in any of its forms has never been, and never will be, the only way good men and women have responded, and will continue to respond, to the world around them and to the generally shared human sense that there exists something we can meaningfully call the divine, the holy or the sacred. The two problems I’ve just pointed to and which push against the existence of an inclusive Christian community, are now multiplied exponentially. So, for example, theologically and aesthetically speaking Islam is not Christianity, Judaism is not Buddhism and so on.

Neither must we forget the countless good men and women who have not held, and never will hold, any supernatural or metaphysical religious beliefs at all and who choose to call themselves atheists, humanists or naturalists. In the eyes of de Benneville, and a Universalist like myself, a truly inclusive community must contain these people too.

As if all the foregoing diversity and difference were not difficult enough to deal with, it is obvious that the truly inclusive community must also contain those whom some of us might at present consider to be utterly beyond our various religious pales, whether the reason given for this is colour, sexual orientation, gender and/or anything else.

And lastly, according to Jesus anyway, the inclusive community must also contain, not only those who believe and practise differently to us (as his parable of the Good Samaritan shows—Luke 10:29-37), but also those whom at this moment we consider to be our enemies, because enemies, howsoever conceived, are also somehow to be loved and blessed by us. This is a phenomenally hard teaching to internalise and act upon at anytime, let alone after the kind of events we have all witnessed this weekend in Beirut, Baghdad and Paris.

All these matters, and many more beside — and I have not even begun to scratch the surface of the need for a truly inclusive community fully to take into account all forms of sentient life, as well as the countless non-sentient aspects of reality — all of these matters help us see that, although in different ways each of our own communities and traditions may aspire to being inclusive, it is in fact impossible for any single Christian church, or any single religion or philosophy to be, itself, the genuinely inclusive community.

So what are we to do? Are we simply to abandon the beautiful vision and simply accept that we are forever going to exist as disparate, distinct, exclusive and, perhaps, even mutually antagonistic communities?

Many people, of course, do take this view and are living it out in a variety of ways — sometimes quietly, by hunkering-down behind self-imposed, fixed, sectarian boundaries; sometimes by means of extremely violent outward actions undertaken outside their own, community’s immediate circles.

But it seems to me, to the tradition to which I belong, and to important thinkers and activists in many other religious and philosophical circles that to cite the Catholic priest, cultural historian and ecotheologian, Thomas Berry (1914-2009), today:

Diversity is no longer something that we tolerate. It is something that we esteem as a necessary condition for a livable universe, as the source of Earth’s highest perfection . . . To demand an undifferentiated unity would bring human thought and history itself to an end. The splendor of our multicultural world would be destroyed (Thomas Berry, Five Oriental Philosophies, Albany: Magi Books, 1968, ibid. pp. 45-46).

Genuine, inclusive community is only going to be possible to achieve when it is consistently conceived on this global, highly diverse, multicultural scale and this will require all of us to re-centre our vision of inclusive community, not upon the old and vanishing dream of achieving inclusivity via some shared, ortho-doxy (a right-belief), but by seeing ever more clearly that we need not believe alike in order to love alike. In other words, the inclusive community I have in mind is one which must centre upon the, admittedly always difficult and endlessly unfolding task of developing a generally shared ortho-praxy (a right-doing).

With the well known maxim “think global, act local” in mind, it seems to me that for such a splendid, self-consciously inclusive, diverse, multi-cultural, practical global human community to have even half-a-chance of coming into being then, locally, we will all have to learn to do something still very difficult for most people, namely, to start acting upon the realisation that each of our current existing religious and secular communities has, and will only ever have, partial access to truth, to beauty, and to goodness and that, therefore, we will all need, humbly, to be prepared to move to one side, to shuffle-up along the pew so-to-speak, so as consciously to make room and time for other faiths and philosophies to contribute to a global conversation about in what might consist the common good.

In 1946 my own tradition tried to express the need to make this difficult move through one of it’s symbols, the off-centre cross. Here is how one of the symbol’s Universalist originators, Gordon McKeeman (1920-2013), later described it: 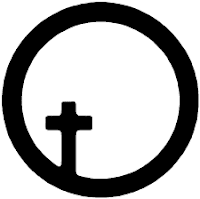 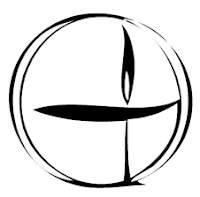 My own church community’s conscious decision to move the cross to one side, explicitly to make room for other religious and philosophical views has been regarded by some as a regrettable betrayal of our birthright Christian faith. That, since 1961, the cross has generally been replaced by the off-centre, cross-like flaming chalice which, since 1946 has become the global symbol of the modern Unitarian movement, will simply be taken as confirmation of this.

But I gently beg to differ, for I truly think that explicitly making room and time for others who believe differently from us is, in fact, not a betrayal of what Jesus taught but is, instead, a very powerful and effective way of allowing a fuller flowering of his message of light-giving, reciprocal, mutual love both to God and neighbour to occur.

And, in the end, I cannot but take great heart from the words attributed to Jesus by the writer of John’s gospel that, “In [his] father’s house there are many rooms” and, had he not thought this were the case he would never have told us so (John 14:2).