Five ways of looking at a tree — a sort of visualisation of Sunday's address on the hope that a new world, a new creation can, suddenly, (if we respond to the flux of the world with care, judgment and sensitivity) whoosh up before us 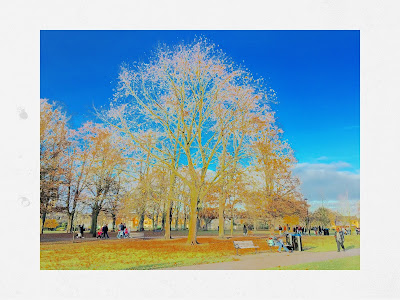 On Sunday I gave an address in which I was trying to encourage my listeners to sense that, even though the world when taken as a whole (if one could ever do such a thing — which one can't) cannot be said to change (I inherit this thought from thinkers like Spinoza and Parmenides) it is, nonetheless, always capable of showing up to us under new modes, moods and aspects. I wanted also to show that a change of mode, mood or aspect can, for us as finite being-in-the-world, always mean there truly exists new possibilities of being. In this sense we can (in principle if not merely at will) create the space, or the conditions for new worlds of practices or meaning. It was precisely this ability to create these kinds of new worlds that Heidegger thought what was made us distinctive as beings.

In a time when many of us on the progressive, centre and leftist political and religious spectrum are feeling at the moment that we are very much on our back foot (for all the obvious reasons I mentioned on Sunday, Brexit, Trump, Marine le Pen, AfD, a revanchist Russia, climate change, etc.) I think this realisation is vitally important because from a certain perspective it is possible to say all can never be lost. True, things may be turning bad for us, and may get worse, but that is never the end of the matter. To be sure a totally human-centred world view may well go the way of the wildebeest, or that of some star gone super-nova, but Being will continue and the miracle of existence and life (if not necessarily human life) will also continue. Again and again I find myself coming back to George Santayana's words introducing Spinoza's conception of eternity that I use repeatedly at funerals:

When a man’s (or woman's) life is over, it remains true that he has lived; it remains true that he has been one sort of man and not another. In the infinite mosaic of history that bit has its unfading and its perpetual function and effect. A man who understands himself under the form of eternity knows the quality that eternally belongs to him, and knows that he cannot wholly die, even if he would; for when the moment of his life is over, the truth of his life remains. The fact of him is part forever in the infinite context of facts [or, as I say in a funeral, "existence"]. George Santayana from his preface to Spinoza's Ethics, J. M. Dent and Sons, 1910.

I realised something of the ability of the same facts/world to show up under different modes, moods or aspects can be illustrated (very imperfectly of course) by the five photographs in this blog post of a tree on Christ's Pieces (opposite where Susanna and I live). The facts of the world do not change from photograph to photograph but something new is, I think, revealed in each of them. it may help folk catch just a glimpse of what I am driving at.

The original photo was taken and edited in the wonderful Hipstamatic app using an iPhone 6+ with the exception of the second black and white photo which was edited in the Blackie app. Just click on a photo to enlarge it.

(PS. This is NOT simply to see the world through some filter or other — rather it's about understanding that we can tune into aspects of the world that are really there but which we weren't yet able to discern and shape into new worlds of practices or meanings or, of course, new pictures.) 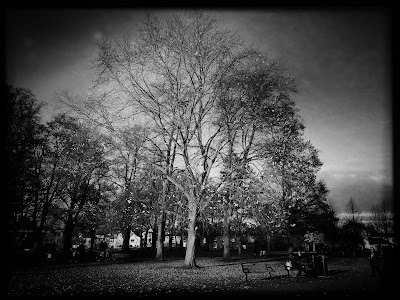 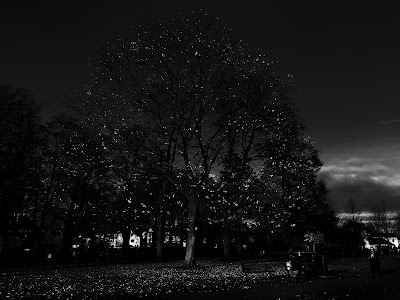 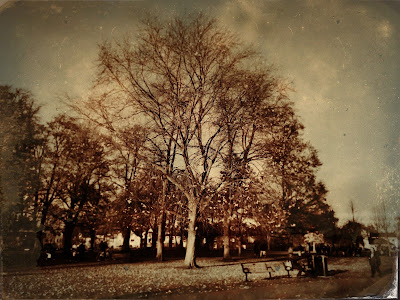 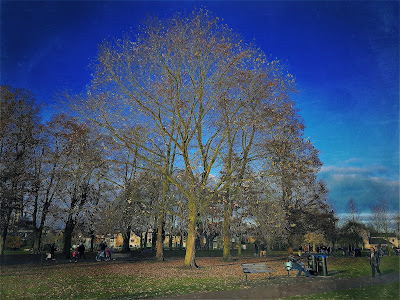