The Mezzotint by M. R. James read by Michael Horden with an accompanying hauntological Hipstamatic photo 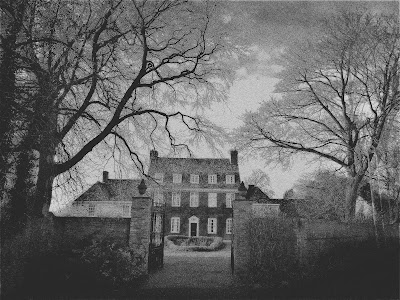 I'm a lifelong fan of M. R. James' ghost stories and of what might be called the "hauntological" literature, art and music of Britain in general. Indeed. as I write this brief post I'm being accompanied by the  music of The Focus Group who record for the Ghost Box label whose music has been described as hauntological.

Anyway, a couple of days I walked over to Fen Ditton and, as always, took a few photos along the way — you can, should you wish, see them here. One of the photos, of the house lying hard by the church, struck me as being reminiscent of the house described in M. R. James' story The Mezzotint found in his 1904 collection Ghost Stories of an Antiquary. Last night I loaded the photo back up into the Hipstamatic app to see if I could edit it better to reveal this connection. I think I succeeded and post it here for your pleasure (just click on the picture to enlarge it). If you read the story at the link above you should quickly see the relationship. Should you be minded, perhaps an even better thing to do would be to turn off the lights, pour yourself a good single malt whisky and listen to the great Michael Horden read you the story at the YouTube link below. What greater pleasure is there in life than indulging now and then in this kind of "pleasing terror" . . .