In my early education the idea that “context is everything” was continually being drummed into me to the point where, later on in my life, it seemed almost to be a platitude. After all, since I and (I assumed) everybody else knew the phrase was self-evidently true, did it really need constant mentioning any more? I fear that our popular culture has over the last thirty years assumed that the answer to this question is “No.” However, the trouble is that when something is not mentioned anymore it is liable to be forgotten — to cite another platitude, to fall “out of sight, out of mind.”

I’m pleased to say that in most academic disciplines it is still very much in mind but I have to admit that I cannot remember when I last saw or heard the phrase cited in the public media (mainstream or otherwise).

Everywhere I turn in the public space I find deracinated fragments of this or that thrown about willy-nilly with no concern at all for context of any kind. The most recent high-profile example of this dangerous practice has been, of course, Trump’s retweeting of three Islamophobic tweets by the ultra right-wing group Britain First which contained videos themselves retweeted by the right-wing US commentator Ann Coulter, one of only 45 people whom the US President follows on Twitter. Of course, the ultra-left are not innocent when it come to this kind of thing either. But, extremes aside, we can see contextless quotation and commentary on the rise everywhere and it seems to be inexorably creeping towards the centre of our culture — if, indeed, a “centre” can meaningfully be said to exist anymore. (“Things fall apart; the centre cannot hold”? — W. B. Yeats).

What this means, at the very least, is that important complex and controversial reflections about important complex and controversial issues (which alone allow for both genuine mistakes to be made, genuine gains in knowledge to occur and genuine forgiveness and understanding to develop) are increasing difficult to have because they are constantly being threatened and sometimes utterly derailed by people (often under the veil of anonymity) who for all kinds of reasons are keen to meter out aggressive, contextless, intellectual violence in order merely to gain extra “hits” or attract “likes” and thereby raise the profile of this or that cause, person or publication.

Well, a good friend and colleague of mine experienced just such a deliberately destructive attack only a few weeks ago at the start of term here in Cambridge. The Dean of Emmanuel College, Jeremy Caddick, wanted in both his sermon and in the liturgy of the eucharist to offer those attending the Welcome Service a set of reflections on a trip he and the college choir had made earlier in the year to the concentration camp in Auschwitz. 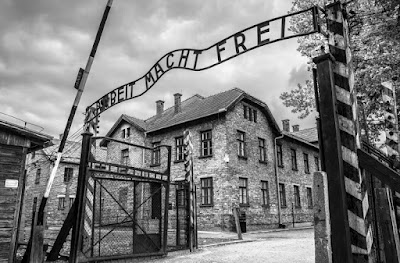 Jeremy chose to put on the cover of the order of service a picture of Auschwitz’s gates (picture to the right) and the point of doing this was, as he said, to place before those present “an iconic image of evil” — an evil to which the whole service was designed to be a powerful, healing, creatively restorative and transformative response. In the presence of this challenging visual image Jeremy pointed in his sermon to the example of the Polish priest Maximillian Kolbe who was himself imprisoned at Auschwitz. In July 1941 three prisoners disappeared from the camp and this prompted the deputy camp commander to pick ten men to be starved to death in an underground bunker in order to discourage any further escape attempts. When one of the selected men, Franciszek Gajowniczek, cried out, “My wife! My children!”, Kolbe, with selfless bravery, volunteered to take his place alongside the other nine and so lost his own life. It is remarkable to note that Gajowniczek survived the horror and was present at Kolbe’s canonization in Rome on 10 October 1982.

As a Catholic priest the eucharist, the sharing of bread and wine (in Catholic Christian traditions as Christ’s selflessly given body and blood) was, of course, a central aspect of Kolbe’s faith and Jeremy, in connection with the Anglican eucharist they were about to celebrate, made the powerfully moving point that in Auschwitz what little food the prisoners had sometimes included a piece of stale bread. For Kolbe, this essential, life sustaining food was often not kept for himself as daily bread but shared with others in a powerfully religious way. Kolbe we discover, would sometimes secretly say Mass for other prisoners using his own bread ration and, as Jeremy says, “In a world where stale bread is a rare luxury the words ‘Take, eat, this is my body which is given for you’, take on a peculiarly poignancy.”

I will leave you to take the time to listen yourself to Jeremy’s fine sermon to see how he then brings this point thoughtfully and relevantly into the present day. Please click on the link below to listen.

But now I want to turn to what happened before the service even began.

Jeremy had printed the orders of service earlier in the day and placed them — out of public view — in the chapel ready for use later that evening, a use that would have clearly placed the picture in its appropriate, challengingly reflective context. However, someone — they have sadly chosen to remain anonymous — deliberately took a copy of the service and via the Cambridge News began to tell a story that suited quite different agendas, ones which centred on “offence taken”.

It was a story in which someone suggested Jeremy’s use of the photo might be a “sick-joke about entering university life” and, by implication this was a joke being made about the Holocaust. As I hope what I have already written reveals this is as far from the truth as it is possible to get. Now, it is telling that the quotation just given above began with the words “I have no idea at all what the possible aim of this is.” Did the person bother to find out later on? Perhaps, perhaps not, but one thing we can be sure about is that the twitter-sphere, the blogosphere and the online media-sphere certainly didn’t bother. True enough, the Cambridge News did contact Jeremy for comment which they printed but by now the story of offence taken was metastasising uncontrollably and as I write, according to Google Search, there are online some 33,200 reports of the story — mostly merely repeating the Cambridge News story verbatim. What we find here is that a “self-evident” truth of our own age is not that “context is everything” but, powerfully enabled by modern electronic media ("mainsteam" and "social"), that a person need have no idea of what they are talking about before deciding to spread world-wide nothing less than lies and misinformation which simply suit their own immediate agendas.

The empirical proof for my assertion that the blogosphere, the online media-sphere didn’t bother to find out what Jeremy’s aim was is found when you take time to go to the Emmanuel College Chapel webpage, where you will find a different, deeply disturbing — but in today’s context not surprising — number: 28. That is the number of times Jeremy’s sermon has actually been listened to as of publication of my blog post here.

All of the above causes me to ask what could have been done earlier this term to challenge this way of proceeding? Well, the university itself might have helped but alas it did not. All that was heard from this august body were a few words from a spokeswoman for Emmanuel College who told the Cambridge News “we understand that without context, this image may have upset people and we apologize for its use in a way that has caused distress.”

But this seems to miss the point utterly. Universities and colleges everywhere are there to educate and inform the public sphere about the importance of context, especially when it comes to dealing with difficult and challenging subjects. Even if some form of apology were necessary (and I’m not sure it was) why on earth was there no full and strong response published alongside it which aimed to encourage people to explore the wider context, to listen to and publicly defend the thoughtful sermon Jeremy actually gave? But nothing was heard above this mere whimper. To quote W. B. Yeats once more, is it any wonder that many of us are beginning to feel something else is becoming a self-evident truth of our age, namely, that “The best lack all conviction, while the worst / Are full of passionate intensity”?

Please listen to Jeremy’s sermon and please spend some time thinking hard about the importance of context because if the importance of context gets truly lost, potentially everything gets lost, and then it’s only a short step before we begin to enter into a climate where gates like those on the cover of the order of service are once again in danger of being set up.
Email Post
Labels: Address Ann Coulter Auschwitz Britain First Cambridge University context Dean of Emmanuel College Donald Trump eucharist Franciszek Gajowniczek Jeremy Caddick Maximillian Kolbe W. B. Yeats
Andrew James Brown
My name is Andrew James Brown. I’m a philosophically/theologically inclined writer with sympathies towards Shin’ichirō Imaoka’s understanding of free religion (自由宗教), Christian atheism, D. G. Leahy’s “thinking now occurring for the first time”, a Lucretian inspired religious naturalism, new materialism and Kyoto School philosophy; also a photographer, cyclist, walker and jazz bass player. In addition to this, I’m the minister of a small, liberal, free religious community in Cambridge (UK)