"Europe in crisis: which ‘new foundation’?" | A powerful and thought-provoking essay by Etienne Balibar 1 December 2017 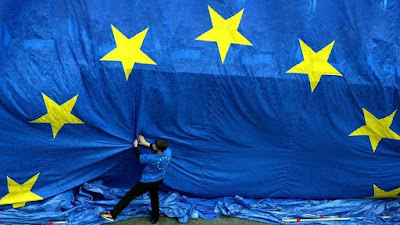 Perhaps, like many of my readers in the UK — and especially those like me who voted to remain in the EU — I find myself in a certain amount of despair and confusion about what on earth politically we are to do at this moment? Having spent hours working through the various options I find I have little choice but to continue to agree with Yanis Varoufakis' view that we should

Tell Mr. Barnier to go home. End these negotiations. And file immediately for an European Economic Area, Norway-style agreement for a five-year period after the end of the two-year post-Article 50 triggering period (A Tale of Two Faltering Unions (UK and EU); and what DiEM25 proposes in response—An address at the Oxford Guild, Oxford University, on passionate believers who are troublemakers, Brexit negotiations, simulating a federation and other conundrums, November 28, 2017).

But is is realistic to think that this could happen? I simply don't know because I can see our current government (and even the opposition) clearly hasn't got a clue itself about what might happen (or even what it wants to happen) in the future— witness today's astonishing news that David Davis has admitted there exist no Brexit impact assessments. WTF . . .

And here's a run of tweets from Laura Kuenssberg making the same point even more starkly . . . 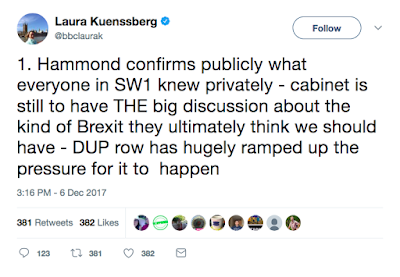 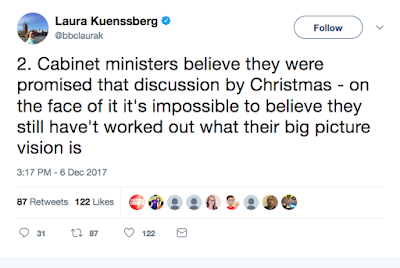 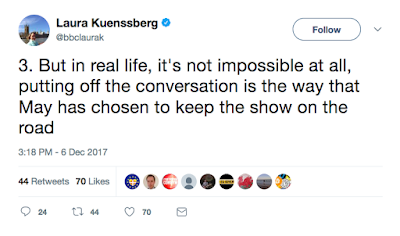 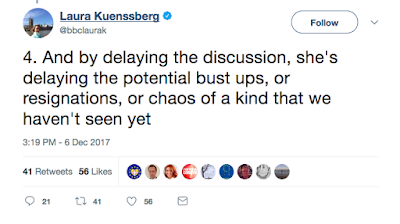 But, in the hope that if and when the dust settles (and that will be no time soon) I might somehow still be a European citizen, I continue to take seriously the woes of the European Union itself and to hope that I might be able to play some small but meaningful kind of role in its future. Given this hope, today I took time to read the following fine and thought-provoking essay by the French philosopher Étienne Balibar (b. 1942). It is an English translation of the main part of his “discourse of acceptance” for the Hannah-Arendt Prize in Political Thought 2017, awarded by the Heinrich Böll Foundation and the City of Bremen (Germany), on December 1, 2017. I think it's worth a read . . .