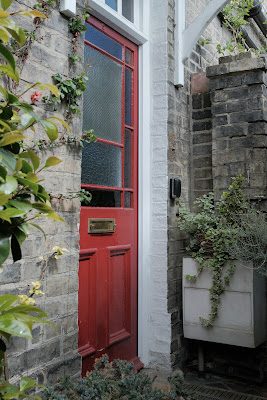 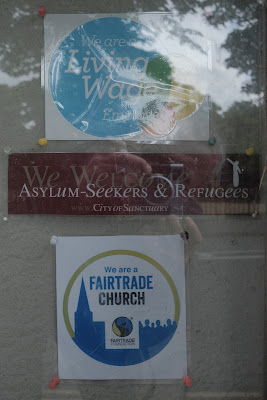 As some of you may know, between last Christmas and the New Year, a recently arrived, homeless asylum seeker from Hong Kong knocked on the manse door to ask for help having seen a Cambridge City of Sanctuary sign on our noticeboard saying we welcome refugees and asylum seekers (see photo to the right). After paying for J. (not his real name)  to spend a week in the local youth hostel many of you, very kindly, then donated what has now amounted to nearly two thousand pounds to a fund to help me continue to help, in a very modest fashion, people who, in their desperation, arrive unexpectedly at the manse or church door.
I’m pleased to say that, thanks to the Cambridge Ethnic Community Forum, and a family working through the Refugees at Home initiative, J. is now in accommodation provided by the Home Office as his claim is processed.

J. and I have remained in touch and met throughout this period and many times he has expressed his gratitude to me, Susanna (my wife), and to you the congregation for the help he received at a very low and dark point of his escape from the Chinese government’s crackdown on pro-democracy activists in Hong Kong.

I hope I have accepted his thanks appropriately but, throughout our conversations, I have been very careful to point out that, at least from where I’m standing, his gratitude should in the first instance not be directed towards me and Susanna or us, but towards what our own Christian tradition calls “the grace of God”, or to what the Shin Buddhist tradition calls “tariki”, which may be translated as “other-power” or something like, “spiritual power beyond the known self” (Mark Blum in The Origins and Development of Pure Land  Buddhism, OUP, 2002, p. 8).

When J. knocked at our door it was about 9.30pm, and being very tired and run-down myself, I decided I would not answer the door. If you know anything about living in a city-centre manse lying in between a church building and the Samaritans you will know why I sometimes so choose. However, the next thing Susanna and I hear is a voice calling up the stairs from inside our hallway asking if anyone is in and whether we can we help them and so downstairs we went. At that point, what else could we do? The thing to realise here is that our front door can be a bit wayward and sometimes it doesn’t close properly and so J.’s knocking had, on this occasion, served to open the door to him.

Fortunately, we quickly discovered that J. was a completely sober and non-threatening individual with what seemed to be a genuine story and so an initial, measured conversation was had about how we might best be able to help. The rest of the story so far you all now know.

As I have already mentioned, I have continued to say to J. that I think his primary thanks and gratitude would best be directed, not to me and Susanna or us, but towards “the grace of God” or “other-power” that was manifested through our wayward, unsecured front door. I tell him: “Remember, I would not have opened the door that night if it had been up to me.”

But it’s not just J. who needs to be aware of this but all of us. Just as J. has benefited from the working of that graceful “spiritual power beyond the known self” manifested through an insecure door, so have I and so have we all because, on this occasion, it has enabled us to do something real, if very modest, to make the world a tiny bit better for another person and, I hope, for us as well.

It’s important to remember, however, that at other times “the grace of God” or “other-power” has, or so it seems to me, kept the manse door firmly closed and secure whilst receiving some significant pounding. Thankfully, over the years, it has stopped a number of highly distressed and out of control people from entering the manse and causing further distress or harm either to themselves or to me or Susanna.

Anyway, the incident with J., as well as a couple of more recent incidents involving both the opening and closing of our door, have all served as a salutary reminder to me that there is no easy, single, simple and predictable way “the grace of God” or “other-power” works. But what is easier and simpler to grasp is that there is always at play in our lives a “spiritual power beyond the known self”, the working of which we must acknowledge even as we often don’t understand or always like what it brings. Such an acknowledgement is, of course, why I am a minister of religion and not a secular charity or social worker, and why we are a religious community and not a secular, homeless, refugee, asylum seeker, mental health or wellness charity.

“In the light of this grace we perceive the power of grace in our relation to others and to ourselves. We experience the grace of being able to look frankly into the eyes of another, the miraculous grace of reunion of life with life. . . . We experience the grace of being able to accept the life of another, even if it be hostile and harmful to us, for, through grace, we know that it belongs to the same Ground to which we belong, and by which we have been accepted” (Paul Tillich, “The Shaking of the Foundations”, Penguin Books, 1963, p. 164).