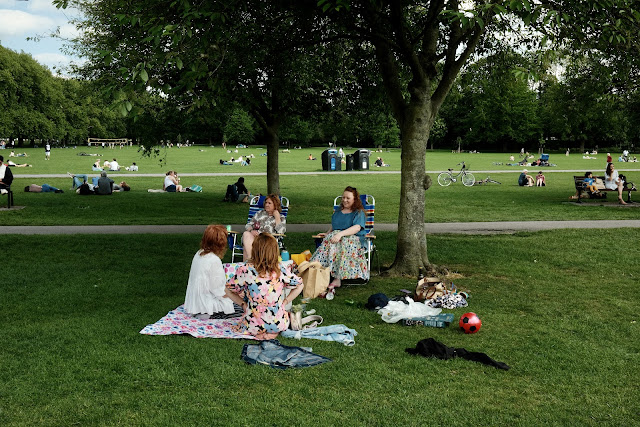 It’s impossible for me to take a colour photo of people enjoying themselves by the seaside or in a park without unconsciously echoing or channelling the work of Martin Parr (b. 1952), something that this photo surely does.

One of the things pleasing about it to me is that there is nothing great or “original” about it neither in terms of content nor style. Too much is made of originality . . . or so it seems to me. All this photo is is a swiftly taken snapshot of ordinary people simply having a picnic and a good time on a sunny, Sunday afternoon on Jesus Green, Cambridge.

The other unexceptional thing about it that I like is that it “captures” — if that is the right word — the sense of something missing from the frame, something intimately connected with the photo but that is going on out of shot. That bright red ball is the first and, colour-wise, the most striking indication of that absence. Of course, it could be that the four red-headed women have brought the ball to play with themselves . . . but that seems unlikely. The presence, or rather absence, of children is indicted, not just by the ball but by those cast aside small denim jackets and black jumper in the foreground. Perhaps they are buying an ice-cream at the nearby kiosk with their (red-headed?) mum, or sister, aunt, grandmother or friend whose handbag, shoes, scarf (?), phone, bottle of wine, wine-glass and box of something or other are gathered together on the right. We simply do not know.

It’s not right to say there’s a mystery here — there’s nothing mysterious about it for this is a quite understandable, accessible, quotidian scene . . . but still, there is something, in fact infinitely many things, we can’t know and will never know from looking at this photo.

In this way, it stands as a classic reminder of how we quite naturally live by what the poet John Keat’s called “negative capability” which helps us to stay with with “uncertainties, Mysteries, doubts, without any irritable reaching after fact & reason.” Will the pleasure of seeing a group of people obviously enjoying a sunny afternoon together be improved for me by an irritable reaching after the story of what’s going on out of shot? Not really. Does one need to know this story simply to enjoy the scene in this caught moment? No. The photo stands complete in its incompleteness and is pleasurable (to me anyway) in its sheer unfinished everydayness.

As police officers on TV say: “Move along, nothing to see here”, where the point is, I think, to catch a glimpse of the uncanny something which is the nothing that helps makes everything that it is.