A reasonable but passionate plea for the recovery (or rather, re-story-ation) of apocalyptic language within liberal religion 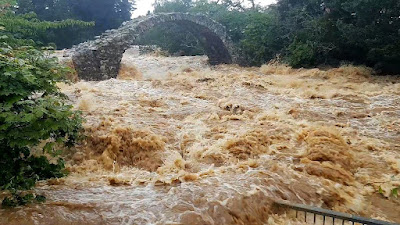 Last week a member of the congregation, Jerry, chose to read for us chapter 8 of the Book of Amos. As he intimated, progressive, liberal religious traditions have inherited some important ideas from Amos, such as the belief that religious sacrifices could never atone for bad deeds, and that the only genuine service of God was not to be found, not in public displays of religion, but only in acts of justice and righteousness. This basic stance was, of course, something shared by the other 8th-century prophetic writers, Isaiah, Hosea and Micah and, three hundred years later, by Jesus.
Many liberals remain happy about these influences but what makes many of them squirm more than a little uncomfortably is these ancient figures’ repeated use of apocalyptic imagery which is intent on showing or describing extremely bad future events, up to and including, the very end of the world.

So, the question is, why do some modern liberals squirm so uncomfortably when they hear apocalyptic language being used? Here’s one possible explanation.

It’s important to know that during the sixteenth-century Radical Reformation liberal religion’s earliest forebears wholly accepted the use of apocalyptic language because it spoke directly to their own situation. On the one hand, in challenging the enormous power of both the ancient Roman Catholic Church, and the new Church institutions of the Magisterial, Protestant Reformation, they knew they were going to face some extremely bad future events. And, on the other hand, they also still believed in, and were eagerly awaiting for, the arrival of an all-powerful God from on high whose second coming was going to bring about the total end of the old corrupt world before establishing a radically new creation (cf. 2 Corinthians 5:16-17; Isaiah 65:17-25; Revelation 21:1-4).

However, with the slow loss of belief in an external, all-powerful, interventionist God during the eighteenth and nineteenth centuries, the threat of a soon-to-come, divinely initiated apocalypse slowly receded. And, as the effects of science, industry and nascent social reform began to spread everywhere, there also began to develop a sense that, despite the occasional setback, we were all now heading inexorably towards an assured, golden future. In short, liberal religion came to believe it had safely left behind the need for apocalyptic language and we became increasingly uncomfortable with its use.

However, I hope I do not need to rehearse with you the slow cancellation of belief in this assured, golden future that has occurred during the twentieth and early twenty-first centuries. And, although many more people than ever can now no longer believe in the God Amos worshipped — and, as a Christian atheist I am assuredly among that number — everyone everywhere is becoming uncomfortably aware of something that was always-already utterly obvious to Amos, namely, that the progress of humanity, onward and upward forever, is not an inevitable outcome written into reality. In short, as a sense of the possible apocalyptic end of the world as we currently know has come disturbingly close to us once again (thanks to climate change), we are simultaneously finding that have lost the language with which can talk about this with each other.

Consequently, as far as I’m concerned, in addition to keeping alive the still relevant critique of the dominant social, political, economic and religious consciousness of the time in which Amos lived — a critique which was aimed at nothing less than the dismantling and destruction of all unjust structures and systems of oppression — we need to explore mythopoetic ways by which we may, not restore, but certainly re-story apocalyptic language (this is a re-story-ation) so that, even in the absence of God, it can, once again, re-energize our modern imaginations and help us see, as Amos, Isaiah, Hosea, Micah and Jesus saw, that despite our political, economic, financial, industrial leaders telling us again and again “there is no alternative” to our current, destructive ways of being in the world (TINA), that, astonishingly, there is an alternative (TATIANA).

It’s well worth remembering at this point in proceedings that, etymologically speaking, the word ‘apocalyptic’ derives from the Greek word which simply means ‘to uncover.’ What was uncovered for both the 8th-century prophetic writers and Jesus was that another, genuinely new and better world is always possible. We clearly need to uncover this possibility in our own age.

One place in Amos where we stand a chance of experiencing what this possibility viscerally feels like can be found in chapter 5:24, perhaps the most famous verse of the book. It reads:

Many people, especially liberals, have tended to hear this verse as saying that the waters of justice and righteousness will continue unabated progressively to refresh and gently and slowly wash our world ever more clean. But, in an age when the world is clearly showing signs of exhaustion and is getting rougher and dirtier, it’s becoming harder and harder to hear Amos’ words in this way.

But what Amos was actually describing in this verse was not some safe, bucolic, babbling stream but an apocalyptic flash-flood — something that is becoming more common everywhere, day by day. We now know that unless we radically change our ways, down a river bed somewhere near us, parched dry by our lack of justice and righteousness, there really is going to come a chaotic, muddy wall of water that is capable of destroying everything in its path including, as Amos believed, the oppressive social, political, economic and religious systems and structures that have bought about our present, parlous situation.

Somehow, as religious liberals, we need to reconnect our desire for justice and righteousness with the radical, urgent energy of Amos’ apocalyptic flash-flood. Apocalyptic language can’t in and of itself change anything but, if it can be re-storied well, then it can still radically enthuse and change us and we may yet be able to change things.