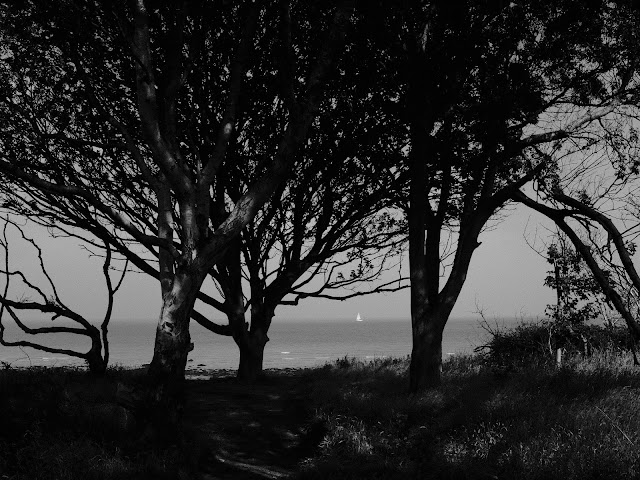 Taken with a Fujifilm X100F
Just click on the photo to enlarge it
In August 2020, during the pandemic when, thank heavens, there had been a slight easing of restrictions, I went with a friend to visit the part of the Essex coastline where I grew up. I took a number of photos on that very hot day which are all very representative of the local coastline. Should you wish to see them just click on this link. But one of them struck, and still strikes me as being very differently thanks to a wholly contingent musical juxtaposition.
In the first few months of the pandemic I had stumbled across a piece of music by the Greek composer Nikos Skalkottas (1904–1949) who was a member of Arnold Schoenberg’s Masterclass in Composition at the Academy of Arts in Berlin between 1927 and 1932. The piece that had captivated me and caused me to dive deeply into his whole oeuvre was his 1942 symphonic overture, The Return of Ulysses (which you can hear at this link) and, in the days before this trip to the coast of my childhood, I had been listening to it repeatedly. As my friend and I walked through a wooded section of the Naze I turned to my right to look through the trees out at the sea and saw the scene you can see in this photo. The return to my childhood landscape, the bright sunlight, the heat, the trees (which with a little stretch of the imagination might be olive trees) and the little sailing boat on the horizon immediately brought into my inner ear Skalkottas’ overture and I found myself imagining that Ulysses/Odysseus was himself aboard that vessel returning to his own home on Ithaca. Then, suddenly, and only momentarily, I was looking out to sea, not from the Naze (with her own seamark) but from Mount Neriton’s leafy ridges . . .
I am Odysseus, son of Laertes, known to the world
for every kind of craft — my fame has reached the skies.
Sunny Ithaca is my home. Atop her stands our seamark,
Mount Neriton’s leafy ridges shimmering in the wind.
(Robert Fagles, The Odyssey, 9.21-9.24, Viking Books, 1996)
The moment lasted not much longer than the time it took for the camera’s shutter to open and close but the experience remains vivid in my imagination and I don’t think I will ever forget it. The Naze is now for me as much a part of Ithaca as it is of Essex . . .
Email Post
Labels: black and white photography Essex Fuji X100F Ithaca Nikos Skalkottas Odysseus The Naze Ulysses Walton-on-Naze Wednesday Photo
Andrew James Brown
My name is Andrew James Brown. I’m a philosophically/theologically inclined writer with sympathies towards Shin’ichirō Imaoka’s understanding of free religion (自由宗教), Christian atheism, D. G. Leahy’s “thinking now occurring for the first time”, a Lucretian inspired religious naturalism, new materialism and Kyoto School philosophy; also a photographer, cyclist, walker and jazz bass player. In addition to this, I’m the minister of a small, liberal, free religious community in Cambridge (UK)