“Selected Writings on Free Religion and Other Subjects” by Shini'chirō Imaoka & “Liberal Religious Reformation in Japan” (1984) by George M. Williams 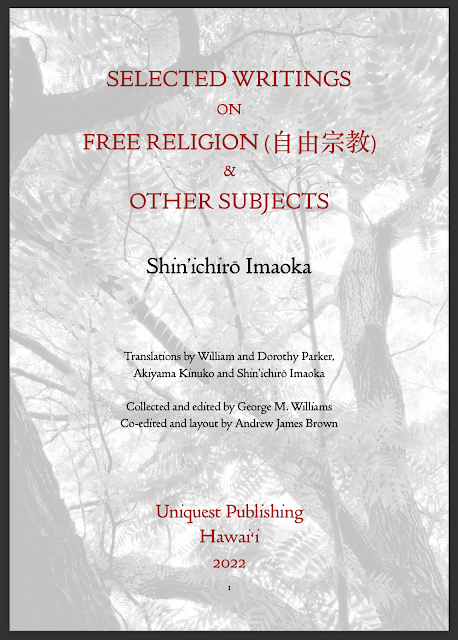 Since writing this post I have been in touch with George M. Williams and, with him, I have been compiling a small booklet of essays by Imaoka sensei that have been translated in English. You can find that in its current state at the following link. Enjoy!

For a number of years now, I have wanted to read an essay (“From Religious Freedom to Free Religion”) written in 1983 by the remarkable and influential figure in the development of progressive and liberal religion in Japan, Shin'ichirõ Imaoke (1881-1988).  George M. Williams, in his recent book about Imaoke sensai (update 06/10/2022: which I now have and can wholeheartedly recommend seeking out), describes him as “a Bodhisattva-Kami-Christian-Unitarian-sage — the Emerson of Japan. Each of these religious perspectives or evaluations saw him as their highest conception of humanity: Buddhist, Shinto, Christian, or religious radical.” George has kindly made his book freely available on both his academia.edu page or via the following link:

“Cosmic Sage: Imaoka Shin’ichirō, Prophet of Free Religion” by George M. Williams
Then, last month, I finally saw available a secondhand copy of the book in which the essay “From Religious Freedom to Free Religion” is found and so duly bought it. At the beginning of this week, the book finally arrived and I have read it with great interest. The whole book is well worth reading and so, in the interests of making it more easily accessible to more people, I have scanned it to pdf and you can download that at the following link:

But, as I have just mentioned, for me, the text I most wanted to read was that by Shin'ichirō Imaoke. You can, of course, read the essay in the book itself, but for general ease of access and searchability, I have just finished transcribing it so as to be able to post it here. For this and more essays by Imaoka sensei in English please click on the first link in this post.

“From Religious Freedom to Free Religion (自由宗教)” (1983) by Shinichiro Imaoke 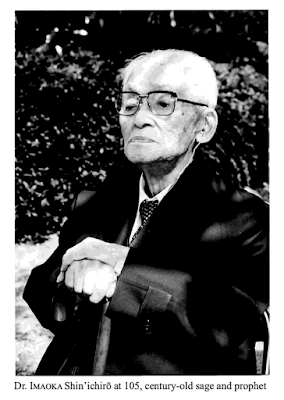 Address delivered by Rev Shinichiro Imaoke at the Worship Service of the national meeting of the Japan Association for Free Religion, October 30, 1983. Translated from Japanese by Bill and Betty Parker, Unitarian Fellowship of Tokyo.

Next year (1984) there will be a meeting in Japan of the IARF, which is rendered in English as The International Association for Religious Freedom. However, we are not translating this name into Japanese literally, as given above, but as ‘The International Association for Free Religion.’ Our theme today is whether the English title should be changed to conform to the English translation of our Japanese title, that is, using ‘for Free Religion’ instead of ‘for religious freedom.’

But for our religious groups, it is not enough to have an organization simply for religious freedom without reference to religion itself. Freedom of religion is only one aspect of free religion. I have always said this must be an organization for religion itself and not just for one aspect, freedom of faith. That is why from the outset we did not translate the English title literally into Japanese and we called the IARF the IAFR. At the meetings which will be held in Tokyo next summer (1984), we must insist that the name of the organization formally be changed to the IAFR. Because we have this fundamental problem, I have made this the subject of today’s talk.

We believe in everyone’s right to believe whatever he wishes, but this alone is not enough to be the theme for the conference. As you know, the IARF was established 80 years ago in the year 1900, in Boston, with the initial name of The International Association of the Unitarian and Other Liberal Religious Thinkers and Workers. It was founded as a Unitarian group. But at the second meeting in 1907, the name was changed to The Congress of Religious Liberals. Then, in 1910, in Berlin, the name was changed to The International Congress of Free Christianity and Religious Progress. In 1932, in Switzerland, it was changed to The International Association for Liberal Christianity and Religious Freedom. Since that time, the abbreviation ‘IARF’ has been used. The word ‘Christianity’ was specifically included to supplant the word ‘Unitarian’ in the original title, and to include all Christianity.

At Boston in 1969, the word ‘Christianity’ was deleted, largely because of our efforts. It was good to remove the word ‘Christianity,’ but then the title was reduced to only The International Association for Religious Freedom. It was because the word ‘Christianity’ was deleted that such Shinto and Buddhist groups as Rissho Koseikai, Konkokyo, Tsubaki Jinja and Teppozu Inari Shrine could join the IARF. That was fine, but we feel there is something missing in just having an Association for Religious Freedom. Religion itself should be the essential concern. Of course, the movement for world peace is also necessary. It is also important to avoid criticism and attacks on other religious groups. But these things alone are not enough to be the aims of our organization. The WCRP, World Conference for Religion and Peace is mainly dedicated to world peace. The Rissho Koseikai and other groups in Japan support this movement. That’s fine, but the transformation of a religious movement into a peace movement poses problems. International peace is very important and we must oppose world conflict. But as a religious association we cannot have peace as our sole objective. Peace is most important. We must work together for peace. But is it enough just to have peace? We do not want to confuse the IARF with the WCRP and have the IARF become a shadow of the WCRP.

That is why I have made the theme of my talk to you today the change ‘From Freedom of Religion to Free Religion.’

Existing religions originally had the same object as free religion does today. But they failed to accomplish their purpose. Religious conflict is understandable, and the objective of free religion is not just to have peaceful coexistence among religions.

In the past, there have been all kinds of special religions. I do not intend to unite these religions under the banner of free religion. All religion is nothing but the self-awareness and self-realization of the individual. Even those things that are considered secular, like politics, economic activity, the labor movement and education, are all expressions of human self-awareness and self-realization, and so are free religion. Human life in its entirety is religion.

Gandhi said to the American and English missionaries, ‘We need bread, not missionaries. Many people are dying from hunger. Bread, not missionaries!’ Recalling Gandhi’s words, I want to say there is something more important than bread, or missionaries, or Christianity. Religion. Religion is present in bread and in economic activity. In Japan we had the case of Rinnoji Temple and Toshogu Shrine fighting for many decades. Finally, the courts settled this dispute which the Shintoist and Buddhists could not settle themselves. I believe that the court decision went beyond Shinto and Buddhism. If law, economic activity and politics involve human self-awareness and self-realization, then they are religion. We must think of religion as having a broad and profound meaning.

Milton said in Paradise Lost — ‘Better to reign in Hell than serve in Heaven.’ As 1ong as a human being is independent, he should not be a slave to anybody, even to god. He should be free. Better king of the underworld than somebody’s slave.

I believe this must be the attitude of the believer in free religion. As you read in my Statement of Faith, there is no mention of God. It is a creed without a god. I have faith in self, in other people, in society. There is no god in my creed. However, if one believes that the universe is religion, then if it is necessary to use the word ‘God’, I see no objection. Then man is God, society is God and the universe is God.

We Japanese say that to show respect one should bow. When you borrow something from somebody you should bow. When you admire something you should bow. Writing a letter to someone is a kind of bowing. No matter what you do you should bow while you are doing it. In this way we bow and we are bowed to. God did not create the universe where there was nothing. When you go to a religious school there is the difficult subject of the theory of the one and only God, and they try to prove the existence of God based on this theory. But we are not talking about such a difficult concept, just about bowing when you write a letter and when you look at something. People are very incomplete but they have the capacity to show mutual respect by bowing to each other. Creative humanity manifesting universal freedom is God. We are trying to build a cooperative society in which we bow to such a God and bow to each other.

We do not always act with subjectivity. With self-realization this universe is God — it is paradise. We become gods and paradise. I think religion must be like this.

Free religion is not merely the freedom of religion or religious freedom, and not just getting along with each other. Of course it is fine to have a religious peace movement but that alone is not enough. There is something beyond peace. Even with peace we will have problems. After the peace there will be conflict. Each new day brings struggle.

Therefore, free religion is bowing to each other, joining each other in vigorously promoting the progress without limit of our universe.