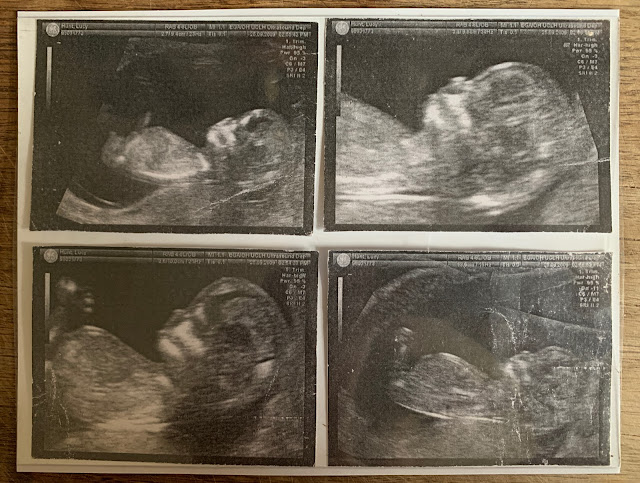 The Advent stories draw their characters from the Gospels of Matthew and Luke. They are: Mary and Joseph (Jesus’ parents to be); Elizabeth and Zechariah (John the Baptist’s parents to be); the Angel Gabriel; the shepherds; the Magians or Zoroastrian priests; and King Herod. Due to fact that he’s not yet been born, Jesus doesn’t appear in the Advent stories, however, one unborn baby does appear, well, sort of . . . To remind you, here’s the story which is found in the Gospel of Luke 1:39-45:

“And during those days Mary went up in haste into the hill country, to a city of Judah, And entered the house of Zacharias and greeted Elizabeth. And it happened that when Elizabeth heard Mary’s greeting the baby leapt in her womb, and Elizabeth was filled with a Holy Spirit, And with a great cry she called out and said, ‘Blessed are you among women, and blessed the fruit of your womb. And is this happening to me — that the mother of my Lord comes to me? For look: As the sound of your greeting entered my ears, the baby in my womb leapt in joy’” (Trans, David Bentley Hart).

Babies continue to announce their presence among us before their birth by leaping in the womb but, today, thanks to the development of ultrasound technology, it’s now possible to see the wee ones quite clearly and so photos of an unborn child now take pride of place on fridge doors alongside the conventional family portraits of old. Today they are with us, even though not-yet.

This made me wonder whether it were now possible to bring the two unborn babies into the Advent season as visible characters and to ask what their experiences in the womb might be able to add to our reflections?

Here, I’d like to suggest just one possible response to this question. It comes in the form of a story told by the singer-songwriter Lhasa De Sela (1972–2010) about an idea of her father’s which inspired her song, “Soon this space will be too small.”

“His idea is that when we’re conceived we appear in our mother’s womb, like a little, tiny, light suspended in immense space. And there’s no sound, it’s completely dark, and time doesn’t seem to exist. It’s like an ocean of darkness. And then, we’re growing and we keep growing and growing and as we grow, slowly we begin to feel things, touch things, and touch the walls of our world that we’re in.

And then we begin to hear sounds and feel shocks that come to us from the outside. Then, as we get bigger and bigger, the distance between ourselves and that other outside world becomes smaller and smaller. And this world that we’re inside, which seems so huge in the beginning and so infinitely welcoming, has become very uncomfortable. And we are obliged to be born.

And my father says that birth is so chaotic and violent that he’s sure that at the moment of birth we’re all thinking ‘This is it. This is death. This is the end of my life.’ And then we’re born and it’s such a surprise because it’s just the beginning.

And in the beginning we’re very small and the world seems infinitely big and time seems infinitely long. Then we keep on growing and we learn how to use our senses. We learn how to touch one more time the contours of the world that we’re in and sometimes, mixed in with the sounds and sensations of this world, we hear sounds and feel shocks that come from yet another world. And that other world follows us our whole lives long, as if something is happening on the other side of a very, very thin wall. But we can forget about it for a long time, and then all of a sudden it comes again, and then at the end of our lives we’re obliged to die.

And at that point, my father says that then we think we’re really smart, and we think — this time — we know for sure that this is death and that this is the end, because everybody knows that. But my father thinks that, that’s not the end either. It’s just the beginning of something else.”

One vital lesson this story teaches, or so it seems to me, is that what is required of us, whether as unborn children or as adults near the beginning or the end of our lives, is always to be ready to respond to the obligation to be born into new ways of being in the natural world that will allow us to widen our perspectives on reality and grow into wiser and more compassionate kinds of being.

Reflecting on this lesson in the context of Advent, to my surprise I find that the teaching the unborn John and Jesus might be offering us from the womb turns out to be very closely related to the teaching they eventually gave us as adults. As you will recall, this teaching came in the form of a twofold offer and a twofold response that was required from us.

In traditional, biblical language the twofold offer was:

1) The time is fulfilled and,

And the twofold response required us to:

2) believe in the good news.

Following, and slightly adapting, an insight of the philosopher Thomas Sheehan, the twofold offer may now be expressed as:

2) the possibility of a creating better world for all really does exist.

And the twofold response this requires from us is:

1) Change how you are and how you live and,

2) bet everything, including your own life, on the good news that says making this change can bring about a better world for all.

When we look around at the way of being in the world humanity is currently expressing we can see clearly that the “time’s up” for the old way. We can all see that humankind is now kicking violently at the limits of the world-womb of Mother Earth and we have grown too big and too dangerous to be left at this very early, reactionary stage of life. If we wish to go on without killing our Mother Earth, then we are now obliged to be born into a radical, new, wiser and compassionate way of being in the world that can truly help us begin to play a positive role in creating a better world for all.

The truth is that all of us now know that we must change how we are and how we live and that we have no choice but to bet our life, all life, on making that change. It is to repent and firmly believe in the good news that a better world is possible.

And this is what I, at least, now hear the unborn Jesus and John and all unborn children to be teaching to us from the womb in this season of Advent.