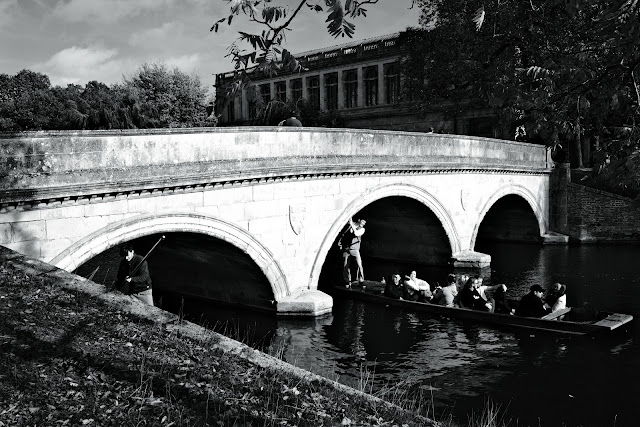 I took this photo on a day when the temperature was closer to that of a normal summer’s day than one at the end of the third week in October (the 22nd, to be exact). So, although this photo looks like an everyday, picture postcard, view of Cambridge, it feels uncanny to me.

This feeling served to remind me that at the end of August there appeared in The Guardian newspaper a thoughtful editorial which reflected on the uncanny beauty of this summer’s “false autumn,” one that was “mysteriously suggestive of evil or danger” and also, perhaps, “an assertion of moral failure.” Well, here before you, is a picture of autumn’s “false summer” and, to me anyway, it appears equally uncanny and also mysteriously suggestive of evil or danger. Our moral failure to address the climate emergency fairly screams out to me in this picture, not least of all because most (perhaps all) of the tourists in that punt will have flown here and deposited many, many tons of carbon dioxide into the atmosphere. Can any of this be seen in the photo alone, detached from my foregoing reflection? I don’t think so. On its own it is simply a pleasing photo of tourists in Cambridge getting on with their holiday.

And this last thought serves, finally, to recall to my mind W. H. Auden’s poem, “Musee des Beaux Arts,” which powerfully “reminds us how everything turns away / Quite leisurely from the disaster.”

About suffering they were never wrong,
The Old Masters; how well, they understood
Its human position; how it takes place
While someone else is eating or opening a window or just
walking dully along;
How, when the aged are reverently, passionately waiting
For the miraculous birth, there always must be
Children who did not specially want it to happen, skating
On a pond at the edge of the wood:
They never forgot
That even the dreadful martyrdom must run its course
Anyhow in a corner, some untidy spot
Where the dogs go on with their doggy life and the torturer's horse
Scratches its innocent behind on a tree.
In Breughel’s Icarus, for instance: how everything turns away
Quite leisurely from the disaster; the ploughman may
Have heard the splash, the forsaken cry,
But for him it was not an important failure; the sun shone
As it had to on the white legs disappearing into the green
Water; and the expensive delicate ship that must have seen
Something amazing, a boy falling out of the sky,
had somewhere to get to and sailed calmly on.