Sacred Nature: The Environmental Potential of Religious Naturalism by Jerome A. Stone 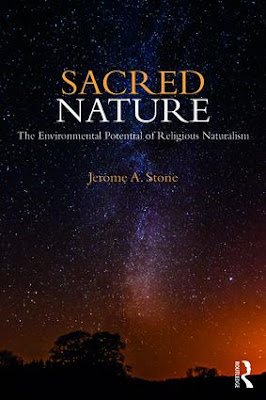 As most readers of this blog know, in addition to calling myself a Christian atheist, I consider myself primarily to be species of "religious naturalist." One of the key influences upon me in explicitly adopting this latter religious/philosophical position some ten years ago was the author (and, coincidentally, member of a Unitarian community) Jerome A. Stone. Well, I'm pleased to say that he has a new book out just this month. It's called Sacred Nature: The Environmental Potential of Religious Naturalism and it's published by Routledge. Below (in italics) is the publishers' blurb but, at the link in the previous sentence you can also preview the first few pages.

In tomorrow's Sunday address — on a different but, ultimately, related subject —I conclude by saying that from where I stand in a free-thinking, liberal religious tradition, I think that one of our most sacred duties is to offer people a radically different political and secular religious project than the dreadful options they currently have before them and one which is able to speak of the divine and sacred in new, creative, naturalistic and peaceful ways that monotheism remains utterly incapable of imagining. Well, here I have in mind as one such option the kind of religion offered up by Jerome A. Stone and I wholeheartedly recommend to you this book, his thought in general and, of course, the religious naturalist position as a whole.