Mother Love All The Way Down 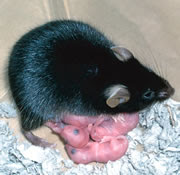 In recent weeks I have been clarifying what I mean when I use the word God in this blog. I have become acutely aware that when I use it loosely and generally it can sound to a first time visitor - and even to regular visitors - as if I am are talking about the same God that is believed in and worshipped in orthodox churches and, for that matter within Islam or Judaism. This impression can be added to by the fact that I nearly always choose to illustrate what I have to say from the Judaeo-Christian tradition - the one after all to which I belong and, for all my study of other religions, the only one I can only really claim to know. Consequently I can, and sometimes do, sound to many people, although liberal, also quite orthodox and conservative. However, those who really know me know that it far from the case.

I begin by pointing to the chief clarification I have been making in the last couple of months or so which is to stress that when I speak of God - and I'm not in anyway demanding that you think likewise - I refer to the kind of God described by Spinoza. Namely a conception which is non-providential, non-interventionist and which is best understood as also being Nature. Most importantly God or Nature (Deus sive Natura) is NOT personal. You cannot talk with, pray to, or influence by prayer, rational argument or lobbying such a God. You will not meet such a God wandering about in the Garden of Eden, through the deserts of the Middle East, the countryside of India nor in England's green and pleasant land. It is vital to conclude this incomplete list by noting that neither does this God write books, holy or otherwise. In short I'm absolutely with Einstein who, in a letter to Murray W. Gross (26 April 1947), who had written to Einstein on behalf of his grandfather who was a Talmudic scholar, wrote:

It seems to me that the idea of a personal God is an anthropomorphic concept which I cannot take seriously. I feel also not able to imagine some will or goal outside the human sphere. My views are near to those of Spinoza: admiration for the beauty of and belief in the logical simplicity of the order and harmony which we can grasp humbly and only imperfectly. I believe that we have to content ourselves with our imperfect knowledge and understanding and treat values and moral obligations as a purely human problem - the most important of all human problems.

At this point I can begin to move towards a theme more obviously connected with Mothering Sunday and I'll take my initial cue from Einstein's point about treating "values and moral obligations as a purely human problem" and as "the most important of all human problems."

To be human is to engage with the world not only as rationalist philosophers and scientists, but also as poets and musicians. We think and we feel.

To help us discern what might be good and lasting human values and moral obligations, we often give those same values and moral obligations faces and personalities. We make them into characters in plays, poems, songs, novels and films. For example, in ancient Israel "wisdom" became personified as a woman, Lady Wisdom. In Greece and Rome "wisdom" was Athena and Minerva respectively.

In Christianity this idea of personification was, or course, expressed most fully in the figure of Christ - a personification not just of one virtue but all of them and, as such, for many Christians Christ became, not just a personification of God - of all ultimate values - but God himself. Of course God has had many guises and personifications and, for the most part within our culture, it has been in the form of an absolute ruler and judge set apart from mere mortals. But one of Jesus' great gifts to us was to change this picture and to offer us a personification that felt much closer to us, namely a loving Father. Now, as should be obvious, I really don't think this picture that Jesus offered us is really-real but I do feel what he taught can be seen as a useful rhetorical tool which helped us to explore, in a particular way, the human problem of values and moral obligations.

In the time and culture Jesus lived his personification of God as a Father was useful, radical and creative. But over the centuries it has become problematical. The personification has become fixed and there are millions of people who really think God is a person and a male one at that. Such a dogmatic and one dimensional personification of God has done unimaginable damage, not only to the human imagination, but also to countless real women. In the face of that the temptation is always to ditch the idea of personification altogether. But, if we did that, we would be left with just the philosophy and science, even though the truths they reveal are genuinely profound and awe inspiring. Remember my point that we are also poets and musicians; even Lucretius (1st Century CE), a clearly materialistic and non-theistic philosopher, felt the need to begin his epic poem De Rerum Natura with a paean to a God - in his case Venus, a personification of the creative power of Nature (C. H. Sissons' trans.):

Mother of all the Romans, moreover, everyone's pleasure,
Comfortable Venus: everything under the stars
- The sea that carries ships as well as the earth that bears
crops -
Is full of you: every living thing is conceived
By your methods and so comes into the daylight.

With Lucretius' "comfortable Venus" in mind, the need for and value of poetic language in our exploration of human problem of values and moral obligations, and the fact that it is Mothering Sunday, I'm going to suggest that there is today a rich harvest to be gained by more regularly personifying God or Nature as a mother rather than as a father. Remember as I do this that I don't think the personification of God or Nature as mother rather than father is any more real - all I am saying is that in our present age it seems more amenable and appropriate to our needs as human beings. Once again I am indebted to by friend and teacher Victor Nuovo for the following illustration.

He invites us to consider the love of a mother for her sucking child. and also the image of God or Nature as mother. He suggests that "if God is truth, then, since mother love is a truer image of love, we perhaps ought to embrace it." Indeed, Victor believes it better "expresses the whole meaning of our existence" and I am inclined to agree with him. In connection with this he tells us about something that recently happened to him:

Some weeks ago, I was loading a cart to carry my recycling down the driveway. It looked like rain, so I though it advisable to cover it with a tarpaulin, to keep the paper from becoming rain-soaked and hard to handle. The tarpaulin lay rolled up beside the cart, where it had been for some weeks. When I unravelled it, I discovered that a mother mouse had made her nest in it; there she was nursing her brood. She was terrified as were her nurslings, whose eyes had yet to open. They clung to her teats not, in this instance, to suckle, but because they found security there. She tried to cover them with her body. They were as one being. It was a beautiful sight, and yet heartbreaking. I had absolute power over them. I could have killed them, and perhaps I should have. But I could not. Instead, I set them gently on a flat shovel, and carried them to the edge of the yard and set them down in some undergrowth. Once there, the faithful mother mouse moved away, her nurslings still clinging to her breasts, and found shelter. Oh how I wished that I might make all beings in the world safe! But I am not the king of love, or a faithful shepherd. And there is no such power. There is only mother love all the way down.

Victor observes that the aim of a mother's love is "to nurture to maturity a free human being (or, indeed, an adventurous mouse!), the perfection of the life that was conceived in her womb and carried there."

In an ideal world a mother's love and suckling "is the beginning of a child’s engagement with the world, the first moment in the adventure of learning, the awakening of the mind, perhaps its first act, a prelude to finding one’s way in the world."

Victor then asks the all important question of "Where does this love come from?" His answer is "that it is in the nature of things to love in this way." And he goes on to say that, although we cannot all be mothers "we can all learn to love like this, tenderly, faithfully, steadfastly, in a way that nourishes, that gives life, that comforts, that seeks to set free, as though we were all mothers to each other."

Although the God in which I believe is not personal - is not really a father or a mother in any of the senses we understand those words - an emergent quality of such a God is, in living creatures, this astonishing thing we know as mothering love - it is graven on the hands of Nature itself. We would do well to observe this fact and, as Victor suggests, encourage it through all the realms of human activity.

Let there be mother love all the way down.
Email Post
Andrew James Brown
My name is Andrew James Brown. I’m a philosophically/theologically inclined writer with sympathies towards Christian atheism, D. G. Leahy’s “thinking now occurring for the first time”, a Lucretian inspired religious naturalism, new materialism and Kyoto School philosophy; also a photographer, cyclist, walker and jazz bass player. In addition to this, I’m the minister of a small, liberal-religious, free-thinking community in Cambridge (UK)