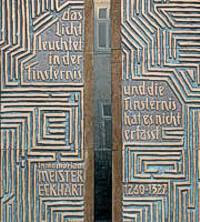 Re-reading and reconsidering some of my recent blogs I think two bits house-keeping are in order - just to ensure I'm not completely misunderstood.

The first concerns my admission that I don't believe in a personal God. I wish to balance this with a clear statement that, in my opinion, we can still benefit greatly from using the language which speaks of God (or Nature) poetically and metaphorically as being "personal." The second concerns what I mean when I say we should be keeping dangerous providential conceptions of God as far away from our civic legal processes as is possible.

On the first matter I want to stress the point I made last week that we are creatures who have imaginations. In consequence it is valuable, educational (and let's not forget, entertaining) to be able to personify human ideas, values and relationships - this allows us to create books, films, poems and songs. Also, because, as Spinoza says at the start of The Ethics (1 prop. 15), "Whatever is, is in God, and nothing can be, nor be conceived without God" what we understand as personality must necessarily be part of the whole. Consequently, God (or Nature) cannot be LESS than personal. But, because at the same time God (or Nature) is so much more than this tiny fragment of reality that includes personality, ultimately, it makes no sense to continue to claim that God (or Nature) is really anything like a person at all. All personalistic and anthropomorhic ideas of God are, in the end, simply inadequate. Meister Eckhart had a lot of wise things to say about this . . .

Anyway, my basic point here is that as long as it is used very carefully, traditional religious language need not be ruled out of court.

My second point concerns what I mean when I say "we should be keeping dangerous providential conceptions of God as far away from our civic legal processes as is possible."

I do NOT mean that individual people and communities who believe in a providential personalistic God should be kept out of the civic sphere and stopped from contributing to society's ongoing debate about how we should govern ourselves. They must have a voice along with the rest of us and I will certainly continue to ensure that is the case.

What I DO mean, however, is that in my opinion in the United Kingdom the possibility of everyone having a voice - theists, atheists, agnostics and all the rest - is best ensured by not allowing the concept of a providential God to become, in any way, a central, governing concept in our law making. It is in this sense that I consider myself a staunch defender of a secular society.
Email Post
Andrew James Brown
My name is Andrew James Brown. I’m a philosophically/theologically inclined writer with sympathies towards Christian atheism, D. G. Leahy’s “thinking now occurring for the first time”, a Lucretian inspired religious naturalism, new materialism and Kyoto School philosophy; also a photographer, cyclist, walker and jazz bass player. In addition to this, I’m the minister of a small, liberal-religious, free-thinking community in Cambridge (UK)

Anonymous said…
"...it makes no sense to continue to claim that God (or Nature) is really anything like a person at all. All personalistic and anthropomorhic ideas of God are, in the end, simply inadequate. Meister Eckhart had a lot of wise things to say about this . . ."

Just the other day I was having a conversation with my brother about this. He was asking me if I believed that there were some things out there that our puny human brains simply could not comprehend. I said, sure, why not. There are certainly many things we don't understand now, and seem far from understanding. He reiterated the question, emphasizing whether there might be things we could never comprehend, things beyond our senses. To this, I said, "Well, maybe. Why not? But then, what would any conversation about those things be apart from guessing and going off in one's imagination?"

That's how I feel about God, and about the little snip of what you said that I reposted here. If God is too great for us to truly understand, what is the point of all the conjecture about him/her/It? I just don't get it.
7 March 2008 at 20:14